Hint: Both are in the digital payments business.

The financial sector may not look great right now -- it's down about 22% year to date as of Monday's close -- but when you look long-term, you'll still find some great performers. Mastercard, for example, had an annualized return of over 30% over the decade that ended last year, while MarketAxess Holdings had an average annual return of about 42%.

So, as we stand at the start of a new decade, which financial stocks are the best to buy now and hold for the next decade -- and beyond? Here are a couple of strong candidates.

Visa: It's where you want to be

If you want a financial sector stock to buy and hold for the next 10 years, start with Visa (V -0.46%). The company has been as consistent as any over the past decade and is positioned for continued growth for years to come. It has produced positive returns every year since 2010 and is up 4.5% in 2020. Over the last 10 years through Dec. 31, 2019, Visa has posted an annualized return of nearly 24%. That's a fantastic record, but let's look ahead to why the reasons to own Visa now are even more important. 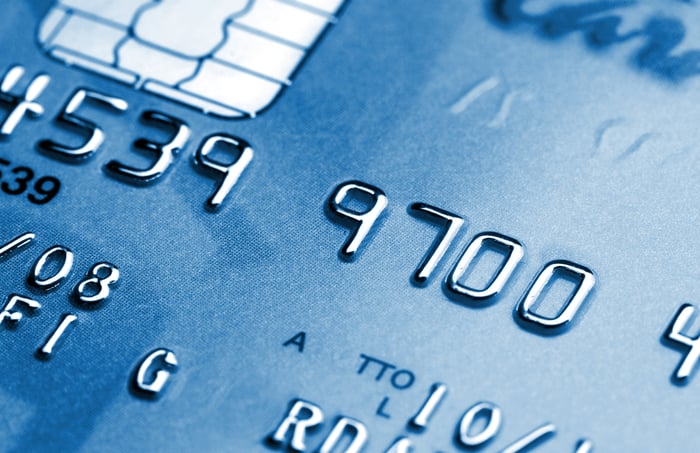 Visa is the largest electronic payment company in the world, the leader in a field that's dominated by just four companies -- the others being Mastercard, Discover Financial Services, and American Express. Visa consistently generates high profit margins. Even through the pandemic, Visa posted a 5% gain in earnings per share in its second quarter, ended March 31, with an operating margin of 65%. These high margins mean Visa is extremely efficient and generates more profit after expenses.

With consumers all over the world moving away from cash and toward digital payment, Visa should be even more relevant over the next decade. A recent report by McKinsey said digital payment revenues will jump by an average of 7% per year through 2023.

And the COVID-19 pandemic may even accelerate the move away from cash to digital payments. The company made a big acquisition earlier this year to maintain its dominance by buying Plaid, a fintech company with technology that allows consumers to connect their bank accounts to financial apps like Venmo, Robinhood, Chime, and others. Also, Visa has a solid balance sheet with $19.9 billion in current assets, including $12.1 billion in cash and short-term investments, and $15.9 billion in current liabilities. Visa also has $13.9 billion in long-term debt and $72.8 billion in assets.

A good balance sheet, consistent profits, favorable trends, and a wide moat are some of the reasons why Visa is a great long-term buy.

Square (SQ -0.16%), a mobile payment processing company, has rewarded investors handsomely since it went public in November 2015 at $9 per share. Less than five years later, it is trading at $101 per share, which represents a roughly 70% annualized return. This year, the stock has blown away the S&P 500 and the rest of the sector, up about 63%. Square started as a way for merchants to accept credit cards on their smartphones, but it has expanded its offerings and customer base into new growth areas that should drive earnings over the next 10 years.

The fintech company now handles over $100 billion in payments annually, and it is just scratching the surface of the growing mobile payment market, which is expected to increase annually by 18% through 2025, according to Grand View Research. But what sets Square apart is that it's expanded into other areas, including banking, through the launch of Square Capital. This product made about 75,000 loans in the first quarter of 2020, totaling $548 million, an increase of 8% year over year.

Square is also getting a lot of value out of its Cash App, which allows users to send and receive payments. The Cash App has grown from about 15 million users in 2018 to about 24 million now, with profits up 115% in the first quarter, year over year.

Square sees the Cash App as a huge growth opportunity. Square also purchased website host and builder Weebly and has created Square Online Store, through which customers can create their own digital storefronts. All this growth potential and a comparatively low price-to-sales ratio of 8.3, and you have a company that should soar through the 2020s.