Please ensure Javascript is enabled for purposes of website accessibility
Log In Help Join The Motley Fool
Free Article Join Over 1 Million Premium Members And Get More In-Depth Stock Guidance and Research
By Brian Withers - Jun 17, 2020 at 11:40AM

These are two excellent businesses enabling the future of commerce, but only one is a better buy today.

Shopify (SHOP -2.26%) and Square (SQ -1.40%) stocks have been on a tear this year, soundly beating the S&P 500, and both are near all-time highs. Even though Shopify's e-commerce platform and Square's payment services have exposure to small businesses that are taking the brunt of the current recession, these two tech companies are adapting to thrive in the new environment and helping out their customers along the way.

Let's take a deeper look at each of these small-business enablers and see which would be the better buy today. But first, let's look at a side-by-side comparison of some key business metrics. 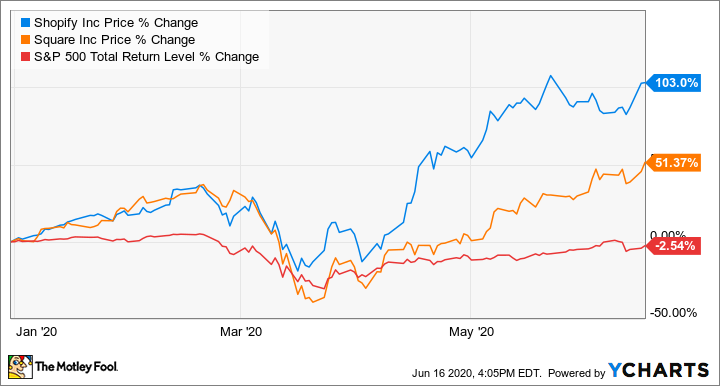 Shopify got a five-year head start on Square, but the payment processor has grown its top line faster and has three times the trailing-12-month revenue. Recent growth rates are similar, but Square is the only one with positive net income.

Both companies are flush with cash, but Square has taken on debt to fund expansion efforts, whereas Shopify has been able to raise cash from secondary stock offerings to fund its growth.

Shopify has been riding the wave of e-commerce since it first released its product to build e-commerce websites in 2006. Over 1 million merchants have signed on to the platform that enables them to run their enterprise from their mobile devices. Recently, the company has been expanding outside of its core e-commerce software offerings giving it a number of huge growth opportunities.

In 2019, it acquired 6 River Systems, a collaborative robot manufacturer, and announced its smart fulfillment network for merchants. Both tools provide an easy way for merchants to handle the physical fulfillment of products in the U.S. This year, the company made significant announcements to expand its financial products including a "buy now, pay later" option for sellers, increasing its availability for loans through its Shopify Capital offerings, and a merchant cash management tool called Balance. These offerings are helping merchants through these challenging times, but are also new revenue opportunities for the company.

With an addressable market of $78 billion and an ability to expand into complementary offerings, Shopify has a significant opportunity to grow. E-commerce is still just getting started around the world and Shopify has established itself as a leader to help businesses of all sizes sell goods and services online.

Square started by making a small square device that plugged into a mobile phone's headphone jack that allowed independent sellers to easily collect credit card payments in person. Over the last decade, it has developed into a robust end-to-end platform for small business owners to run all aspects of their business, and sell goods in-person and online. If that wasn't enough, it's also been quietly building a $1 billion business with its cash app, which facilitates person-to-person and person-to-business payments. 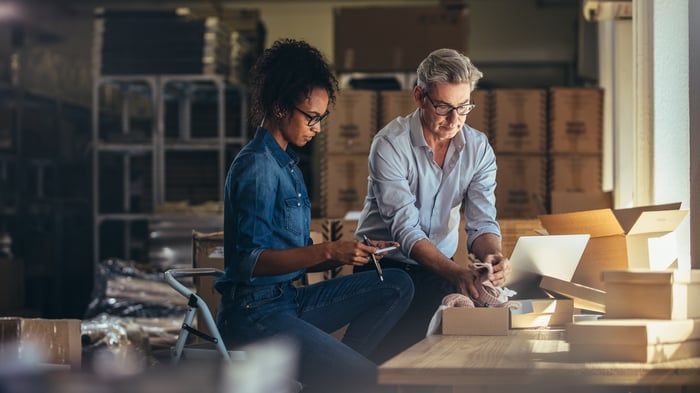 Its platform is used by many brick-and-mortar retail shops to collect in-person payments at the register. Historically, two-thirds of its seller revenue came from these kinds of transactions until COVID-19 forced many retailers to adapt. The company quickly rolled out enhancements to allow curbside pickup and delivery options for buyers and many shops made the effort to build a web presence with Square's robust set of e-commerce tools. These two actions increased the percentage of online payments to about 50% of the total in April. It wouldn't be surprising if this trend continues and many more sellers create online selling options for customers.

Square has penetrated less than 3% of the $100 billion seller addressable market and less than 2% of the $60 billion market for its cash app, giving this fintech plenty of room to run.

Shopify's latest partnership announcement with Walmart and Square's recent acquisition of Spanish payments company Verse show that these two innovators are not resting on past successes. Both of these software specialists are excellent operators and have similar growth rates and a huge growth runway ahead, but Square is the better buy today. It has a larger revenue base, a more established payments business, and doesn't have a nosebleed valuation. Growth investors don't mind paying up for quality, but Square's single-digit price-to-sales ratio of 8 (versus Shopify's 50) makes it a more attractive buy today.