ESG investors now have two billion reasons why this stock should be on their radars.

In a step reflecting its desire to achieve net zero carbon by 2040, Amazon (AMZN -0.54%) announced today that it is dedicating $2 billion to The Climate Pledge Fund. According to Amazon's founder and CEO Jeff Bezos, "The Climate Pledge Fund will look to invest in the visionary entrepreneurs and innovators who are building products and services to help companies reduce their carbon impact and operate more sustainably."

Unlimited in its scope, The Climate Pledge Fund will seek investments in businesses of any size or industry, provided they are committed to realizing a zero carbon economy. Addressing the possible targets of the The Climate Pledge Fund, Bezos said, "Companies from around the world of all sizes and stages will be considered, from pre-product start-ups to well-established enterprises. Each prospective investment will be judged on its potential to accelerate the path to zero carbon and help protect the planet for future generations." 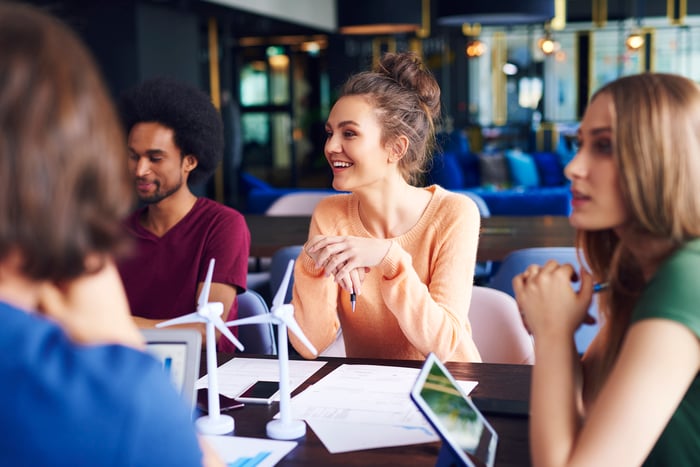 For those who follow Amazon, its interest in clean energy solutions is nothing new. Last year, the company announced its goal to power 100% of its operations via renewable energy in the next 10 years -- something which it now aims to do by 2025. Currently, the company is involved in 91 renewable projects globally, including four new solar and wind projects it announced in March. And in its recently released 2019 Sustainability Report, Amazon stated that over the past five years, it has reduced the weight of outbound packaging by 33% and eliminated more than 880,000 tons of packaging material.