Two of the biggest stocks listed on the exchange pulled key indexes lower from record levels.

The stock market has been on an amazing run, but even the most impressive bull moves have to end sooner or later. For the Nasdaq Composite (^IXIC 2.06%), a run to record highs came to an end on Wednesday, with investors reacting negatively to signs that the coronavirus pandemic might not be sufficiently under control to warrant further loosening of restrictions on business activity. Both the Composite index and the Nasdaq 100 suffered declines of roughly 2%.

The biggest companies in the Nasdaq 100 have disproportionate influence over the movement of the index, and that's why big moves from top companies deserve special attention. Both Facebook (META 1.76%) and Tesla (TSLA -8.79%) underperformed the Nasdaq today, as both companies have had to deal with some controversial issues that could linger well into the future.

Facebook saw its stock drop more than 3% Wednesday. Investors seem to be paying more attention to discord at the social media giant, which has not only affected its internal staff but also caused some of its advertisers to put pressure on the company to change some of its policies. 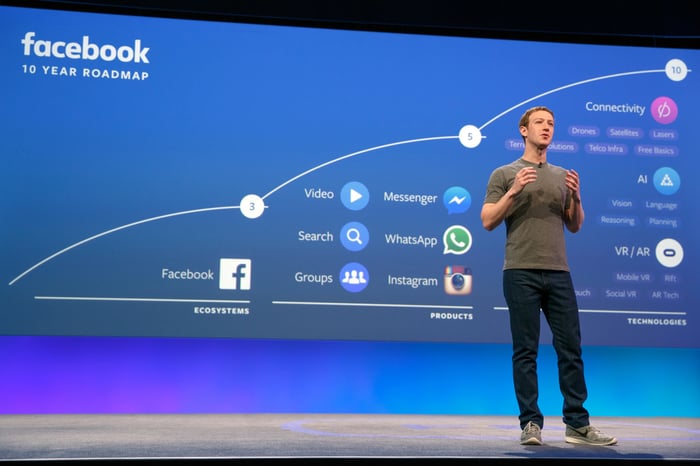 Like many social media companies, Facebook has had to come up with positions on how much responsibility it will take for content that its users put on its site, and recent political events have brought Facebook's policies to the forefront. Within the social media giant, some employees have held protests over Facebook's policy on speech, which they argue enables people to engage in hate speech, incitements to violence, and efforts aimed at illegally influencing election results.

At the same time, several nonprofit civil rights advocacy groups have called on advertisers to pull their Facebook ad campaigns because of the policy. Many major companies have responded, and the number continues to grow. News that Brazilian regulators forced Facebook's WhatsApp payment platform to stop operating after just a week also weighed on investor sentiment.

Facebook has encountered plenty of controversy before, and today's losses aren't all that significant for a company its size. Nevertheless, there are growing signs that the social media company needs to take action in order to prevent a more painful hit in the future.

Tesla stock, meanwhile, dropped almost 4%, as investors reacted to news of a potential defect in one of the company's vehicles, this time affecting the high-end Model S sedans.

The National Highway Traffic Safety Administration (NHTSA) is responding to reports of touchscreen defects that prevented their use. Complaints came from owners of Model S vehicles built between 2012 and 2015, with nearly a dozen saying that the media-control unit in their cars failed prematurely.

For the most part, though, the failure doesn't have implications for vehicle safety. Much of the purpose of the unit is to provide web browsing and entertainment options. But vehicle navigation is provided by the unit, and failures can keep the Tesla model's rear camera display from assisting drivers when they back up or prevent the use of climate controls to defrost windshields or windows.

Tesla has dealt with NHTSA investigations before, and although it didn't immediately respond to this one with comments, the electric automaker still sees itself as having a strong safety record. Some fear that bad publicity could affect new model sales, but so far, Tesla has managed to keep its customers loyal even through investigations of more-troubling defects.