Please ensure Javascript is enabled for purposes of website accessibility
Log In Help Join The Motley Fool
Free Article Join Over 1 Million Premium Members And Get More In-Depth Stock Guidance and Research
By Billy Duberstein – Jun 24, 2020 at 8:40AM

The Japanese tech conglomerate's big stock sale is out of necessity, not desire.

Shares of T-Mobile (TMUS -0.35%) were temporarily lower Monday night and Tuesday morning, after the company revealed that it would be facilitating a $21 billion stock sale from large shareholder Softbank (SFTB.Y -1.40%). To recap, Softbank was the majority owner of Sprint, which merged with T-Mobile on April 1, giving Softbank 24.6% ownership of the "new" T-Mobile.

In general, when one sees such a large shareholder selling billions of dollars in a stock has run up 36% year to date, it may be a reason to pause and think about selling some shares yourself. However, in this case, there's not one reason, but several, why you should actually do the opposite and buy the very shares Softbank is currently selling. 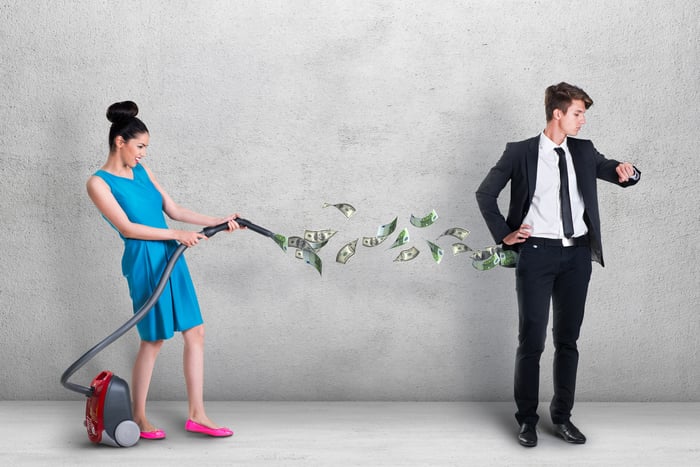 Why you should buy the T-Mobile stock Softbank is selling. Image source: Getty Images.

Reason No. 1: Softbank is a forced seller

There's a very good chance that Softbank doesn't really want to sell its T-Mobile stake but rather has to in order to get its own house in order. Softbank took a big hit this year in its internal $100 billion Vision Fund, which posted an $18 billion loss back in May. Much of the investment losses were due to a huge writedown on its investment in WeWork, as well as other tech start-ups that have been hurt by coronavirus.

Not only does Softbank have an imperative to shore up its own balance sheet, but it's also under additional pressure from activist investor Elliot Management. Elliot took a $2.5 billion stake in Softbank back in February and then suggested the company monetize some $20 billion of assets from winning investments like Sprint/T-Mobile and its stake in Alibaba (BABA 1.18%) and repurchase its own stock. Softbank then did one better, announcing in March that it had plans to monetize $41 billion, to both buy back about $20 billion in stock and then pay down even more in debt. As one of its biggest assets, T-Mobile's stock was a prime target for selling, but only because Softbank needs the money.

Reason No. 2: Other insiders are buying from Softbank

It would be one thing if Softbank was merely selling shares to the public markets; however, on the other side of Softbank's sale, there are several "insiders" buying shares from them:

I don't know about you, but when I see insiders willing to buy such a large amount of stock, that appears to signal confidence in T-Mobile shares going forward, despite Softbank's sale.

Reason No. 3: Softbank isn't selling as much as it may appear

Finally, even though Softbank is selling such a large amount of T-Mobile, a closer look reveals that the company isn't exactly bearish on T-Mobile's stock. In fact, quite the opposite.

First, Softbank is selling only about 65% of its existing stake. If Softbank really did think shares were overvalued, it probably would be selling its entire stake, given the need to shore up its balance sheet back home. Yet by keeping 35% of its existing stake, it will still hold about 8.6% of T-Mobile, equivalent to about $11 billion. That's still a pretty sizable investment, accounting for over 10% of Softbank's entire $103.7 billion market cap as of this writing.

Finally, Softbank is highly likely to receive additional T-Mobile shares in the future. That's because as part of the renewed Sprint-T-Mobile merger agreement, Softbank had to sacrifice 48.8 million shares to T-Mobile, because of Sprint's underperformance during the two-year period in between the deal agreement and its closing.

However, Softbank will get those 48.8 million shares back if T-Mobile's 45-day average stock price exceeds $150 between April 1, 2022, and Dec. 31, 2025. Given that shares are around $107 right now and they have five years to reach that price, it's a good bet that Softbank will be getting those 48.8 million shares back at some point in the future. At $150, those shares would be worth an additional $7.32 billion.

The final reason: T-Mobile is just a good company

Of course, it's not enough to just blindly buy into a stock because insiders are buying. The best reason to buy T-Mobile shares is that it's a customer-friendly company, has a great culture, and has been a winning business and stock for the better part of a decade. In today's market, winning companies tend to keep winning. Now armed with the best 5G spectrum portfolio in the telecom industry in the wake of the Sprint deal, and things appear brighter than ever for the "Uncarrier" heading into the 2020s.