Please ensure Javascript is enabled for purposes of website accessibility
Log In Help Join The Motley Fool
Free Article Join Over 1 Million Premium Members And Get More In-Depth Stock Guidance and Research
By Zhiyuan Sun - Jun 24, 2020 at 8:55AM

Shares of Aphria have soared over 78% in the past three months. Here's why the party is not over yet.

In the last three months, the S&P 500 has rebounded by over 36% as hopes of an economic recovery materialized. At the same time, shares of Canadian pot producer Aphria (APHA) have more than doubled the index's performance, returning over 78% during the same period. It's rare for a pot stock to beat the market these days. An exchange-traded fund that tracks the performance of all major pot stocks, the ETFMG Alternative Harvest ETF (MJ 0.30%) has grown just 40% in the last three months. So everyone's been talking about why Aphria has been able to best its cannabis competitors amid a pandemic and a recession.

Because Aphria's stock has rallied significantly, investors are wondering whether it's a good idea to sell their shares now and take profits, or hold their positions while the stock appreciates higher. I think the latter is the best path because many of the risks Aphria was facing have been cleared, and the stock can still be bought for an absolutely dirt-cheap valuation. Let's take a look at why. 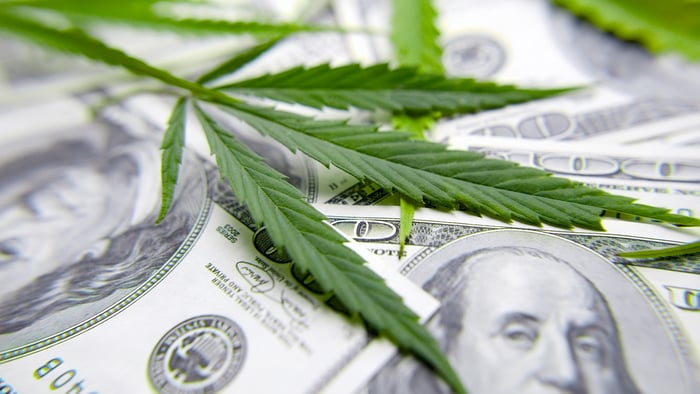 First of all, while the coronavirus pandemic has been wreaking havoc, Aphria has been gaining market share in Canada. As of the third quarter of 2020, the company holds 77% of the market share on all brands of vaping products in Ontario. In Quebec, e-commerce sales of Aphria's marijuana products grew by 200%. Signs of growth manifested across all major Canadian provinces for Aphria's products.

Meanwhile, the company has not stopped expansion efforts and continues to invest in the future. Aphria is on track to spend a further $90 million for expansion into Germany and Colombia. Growth will be a big player in reducing its leverage going forward. For example, CC Pharma is one of Aphria's flagship marijuana subsidiaries and operates more than 13,000 pharmacies in Germany and across Europe. In the month of March alone, the subsidiary's revenue increased by 50%.

Additionally, the company has more than CA$515 million in cash and investments on its balance sheet and can comfortably endure material adverse impacts to its business due to the pandemic. Even with expenditures accounted for, the company still expects it will have more than CA$400 million in total liquidity by the end of the year.Currently, Aphria has less than $400 million in long term debt, which should be comfortably offset by its cash and investments.

During the quarter, Aphria harvested 31,000 kilograms of cannabis and sold more than 14,014 kilograms in equivalents, representing a 98% increase over the 7,062 kilograms it sold in the second quarter of 2020. The company is on its way to achieving an annual production rate of 175,000 kilograms. The average selling price of its recreational marijuana for adults is also on the rise, increasing from CA$5.22 per gram in Q2 2020 to CA$5.46 per gram this quarter. Together, the company's CA$144 million revenue is nearly double that of last year.

In terms of profitability, Aphria is doing great. In Q3, the company recorded CA$23.7 million in gross profit, CA$14.2 million in net income, and CA$5.7 million in earnings before interest, taxes, depreciation, and amortization (EBITDA). This was Aphria's fourth quarter of consecutive EBITDA growth. Overall, I do not expect any material adverse impacts on Aphria's bottom line, as the company said on its earnings call that there was no pricing pressure as a result of pandemic headwinds. Investors may argue, however, that Aphria is risky because the company pulled its earlier full-year guidance for fiscal 2020 due to the pandemic on April 15. In doing so, the company claimed significant sales uncertainty and potential impacts in the event the EU closed its borders to trade to halt the spread of the coronavirus.

I think these risks have not materialized. First, the EU did not close its borders to the flow of goods, and total trade volume only decreased slightly compared to last year. Second, cannabis sales are skyrocketing in North America as many turn to the product to deal with the stress and anxiety associated with lockdowns and self-isolation.

Hence, I think it's more likely than not that Aphria will achieve its midpoint full-year guidance of CA$600 million in revenue and CA$38.5 million in EBITDA. With a market cap of $1.2 billion, Aphria is only trading for three times forward price to sales. Therefore, the stock is still very cheap compared to its future potential, and I would recommend Aphria to be in every cannabis investor's portfolio.