Please ensure Javascript is enabled for purposes of website accessibility
Log In Help Join The Motley Fool
Free Article Join Over 1 Million Premium Members And Get More In-Depth Stock Guidance and Research
By Sean Williams - Jun 25, 2020 at 5:51AM

These three companies are changing the medical-care landscape.

For more than four months, investors have had their resolve tested like never before. If you were unclear as to whether you had the stomach to invest in the stock market prior to the beginning of 2020, you now know that answer.

In a period of less than five weeks, the broad-based S&P 500 lost a whopping 34% of its value due to uncertainties tied to the coronavirus disease 2019 (COVID-19) pandemic. This decline marked the fastest descent into bear market territory, as well as the quickest 30%-plus drop, in stock market history.

Yet in the roughly 11 weeks that followed the S&P 500's low on March 23, the widely followed index regained more than 80% of its losses. 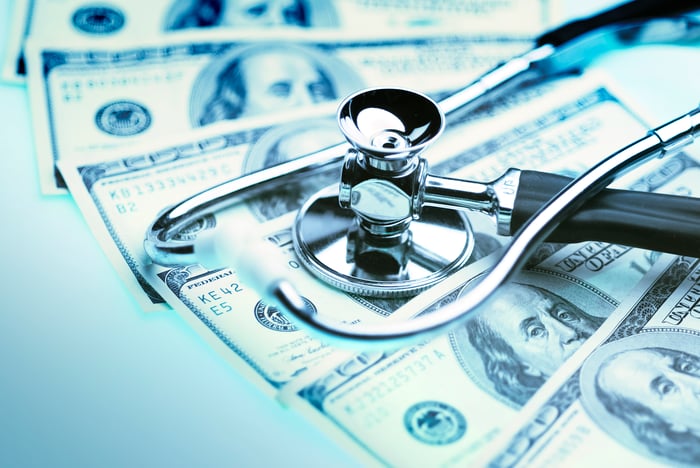 Amid the chaos, healthcare stocks stood their ground better than most sectors. This makes sense given that healthcare is highly defensive. In other words, we don't get to choose when we get sick or what ailment(s) we develop, which means there's a steady stream of demand and cash flow for the vast majority of the healthcare sector no matter how well or poorly the economy is performing.

It's important for investors to understand that while the da Vinci system and its numerous iterations have been around for two decades, there's still an exceptionally long runway for Intuitive Surgical to grab additional market share. The da Vinci system is the current market-share leader for urology and gynecology surgeries, and it has recently begun gaining share in thoracic, colorectal, and general soft-tissue surgeries.

For investors, the best aspect of Intuitive Surgical is that the company's margins should just keep getting better over time. Aside from new innovations that have the potential to generate juicy margins, such as the Ion minimally invasive lung biopsy system, Intuitive Surgical will benefit from its higher-margin sales channels (instrument sales and system servicing) growing into a larger percentage of total sales as more da Vinci systems are installed. 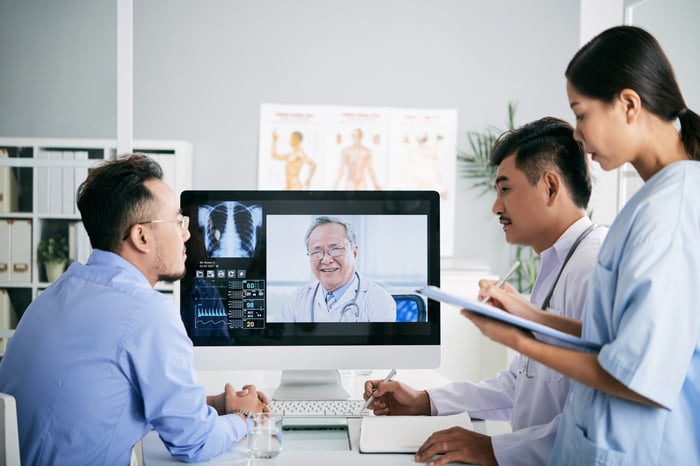 Another company revolutionizing the healthcare space is Teladoc Health (TDOC -9.54%). Prior to the COVID-19 pandemic, we were already seeing a multiyear push toward personalized medicine, with a distinct uptick in the usage of telemedicine (i.e., virtual visits with a physician or among a team of physicians). The pandemic, however, has been a shot in the arm for telemedicine demand, and Teladoc Health stands to be its prime beneficiary.

Keeping in mind that Teladoc Health was already growing at a rapid pace before the coronavirus pandemic, the company reported a 92% jump in total visits during the first quarter from the prior-year period, with visits from members in the U.S. increasing 93% and fee-only visits rocketing higher by 263%. Teladoc ended March with 43 million paid U.S. members, which represents just a fraction of its potential domestically and abroad.

As convenience becomes paramount in the medical care setting, there's virtually no doubt that we're going to see Teladoc's subscriber count rise. Remember, telemedicine visits are actually a win for all parties involved, with physicians potentially able to squeeze more patients into their schedule and insurers having to outlay less money given that telemedicine visits tend to be cheaper than in-office consultations.

In sum, a sustained 20% growth rate throughout the 2020s isn't out of the question. 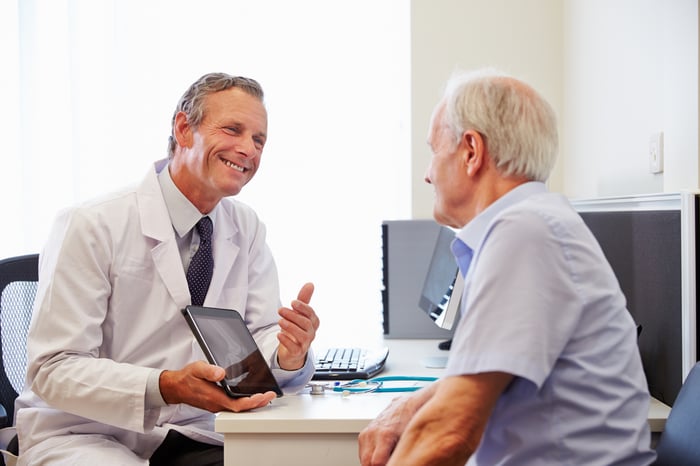 No list of revolutionary healthcare stocks would be complete without mentioning the red-hot Livongo Health (LVGO), which has bounced more than 200% off of its March lows.

What sets this healthcare solutions provider apart from its competition is the way it's tackling its objective of helping patients with chronic conditions live healthier lives. Livongo is aggregating copious amounts of data from its patients and utilizing artificial intelligence to provide practical tips and helpful nudges that'll incite behavioral changes in these members. According to a May 2020 presentation from the company, more than 40% of patients receiving these "nudges" have found them helpful in staying on top of their disease.

Currently, Livongo is primarily focused on helping patients living with diabetes, though it has plans to branch out its solutions to include patients with hypertension, weight management issues, and prediabetes. For some context, there are 34.2 million diabetics in the U.S., along with close to 40 million people with hypertension and 88 million with prediabetes. Livongo's patient pool is constantly growing and more massive than you probably realize.

Of course, the greatest thing about Livongo Health from an investor's perspective is that it's already generated two consecutive quarterly profits despite having less than 1% of total diabetes market share (a little over 328,000 Diabetes members, relative to 34.2 million diabetics in the U.S.). If Livongo is generating nominal profits with sub-1% share, imagine what happens when it penetrates 5% or 10% of the diabetes market share, if not higher.