Please ensure Javascript is enabled for purposes of website accessibility
Log In Help Join The Motley Fool
Free Article Join Over 1 Million Premium Members And Get More In-Depth Stock Guidance and Research
By Howard Smith – Jun 25, 2020 at 9:29AM

The toy company has battled tariffs and the pandemic, but with shares more than 40% off last year's highs, any good news should lift the stock.

Shares of Hasbro (HAS -2.81%) were riding high in 2019 as the play and entertainment company saw strong growth in its partner brands segment. This was led by sales boosted by Walt Disney's (DIS -2.60%) Frozen 2, Marvel characters, and Star Wars, as well as success in franchise brands including Magic: The Gathering and Monopoly. Hasbro also spent $3.8 billion to acquire Entertainment One (eOne), expanding its global brands.

While shares have recovered from recent lows seen when the overall market plunged from COVID-19 pandemic fears in March, they still remain 44% below those all-time highs, and significantly trail the recovery of the S&P 500 index. But promising business updates suggest a sharper recovery may be coming soon. 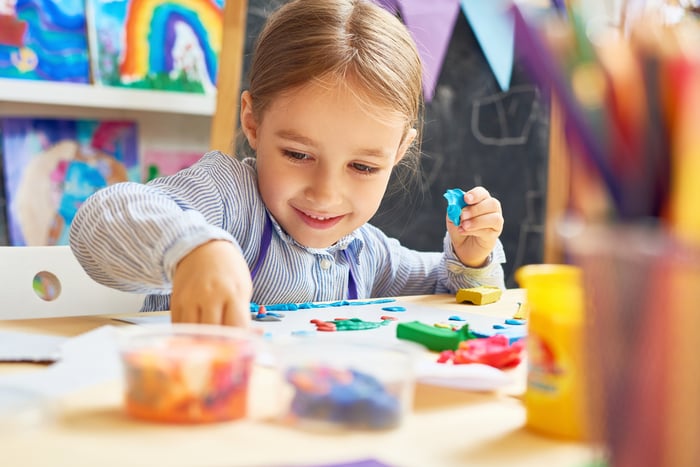 Hasbro's share price reached all-time highs before the U.S. implemented tariffs that increased expenses and lowered revenue, which knocked shares down after third-quarter 2019 earnings were reported. Supply chain concerns brought on by the start of the COVID-19 pandemic in China then added to investor fears, along with the subsequent shutdown of the U.S. economy to help slow the coronavirus spread. But Hasbro stock hasn't participated that much in the market recovery. 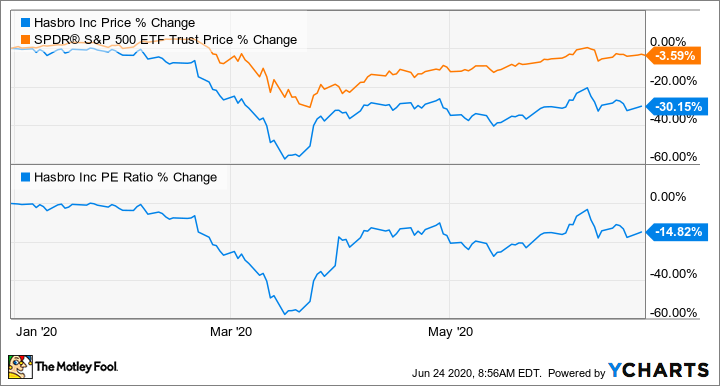 The stock is down roughly 30% year to date, while the S&P 500 is only down about 3.5%. And Hasbro's price-to-earnings ratio has also declined, leaving it at about 18 measured against 2019 earnings.

There are certainly still headwinds for Hasbro's business in this environment, but it is positioned to take advantage when those subside. The company says that supply chain issues are behind it. "Supply chain [is] positioned to meet full-year product demand requirements leveraging growing retailer channels, including [e-commerce] and omnichannel," the company said in its first-quarter 2020 earnings release.

On Feb. 21, Hasbro announced the renewal of a multiyear agreement on the Disney franchises that should see benefits from the popularity of the Disney+ streaming service. Characters in the licensing agreement include Baby Yoda from The Mandalorian, and Marvel's Spider-Man, Black Widow, Iron Man, Captain America, and Black Panther.

Whether movies successfully return to theaters, releases transition to streaming platforms, or there is a combination of the two, Hasbro will benefit from the popularity of its characters. The company also saw some benefits in the first quarter from stay-at-home requirements brought on by the pandemic. It said demand increased in its gaming category, which includes Monopoly and Magic: The Gathering.

Though the pandemic has hurt its entertainment category, the company says its new eOne team continues to develop new projects. Release dates have been pushed back and some films will be distributed directly for video-on-demand or for download, the company said.

Investors are paid to wait

As the share price has lagged, the dividend yield has become attractive, currently about 3.75%. Unless the economy sees an extended recession, the company should be in position to continue the dividend at the current rate. It ended the first quarter with $1.2 billion in cash, another $1.5 billion in available credit, and doesn't have a major loan payment until $300 million is due in May 2021. 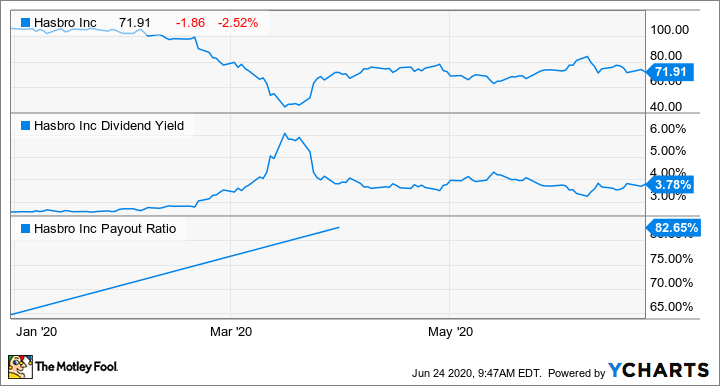 So while there were fundamental reasons for Hasbro's share price to fall from recent highs, the company should be ready to recover well. Investors with patience will be paid to wait, and should see outsize capital returns on top of that dividend income.