Please ensure Javascript is enabled for purposes of website accessibility
Log In Help Join The Motley Fool
Free Article Join Over 1 Million Premium Members And Get More In-Depth Stock Guidance and Research
By Lee Samaha – Jun 25, 2020 at 10:32AM

The company's retail sales performance was better than the headline numbers imply, and there's a case for income-seeking investors to consider buying the stock.

Caterpillar's (CAT -1.50%) monthly retail sales figures are eagerly followed by shareholders and the market alike. They are a useful barometer on current trends and the fact that they recently showed some hefty declines is not great news. However, the devil is in the details, and the performance needs to be put into context. There were some positives in the report and the numbers weren't as bad as they seem on a superficial basis.

Below is a graphical depiction of the sales data by end market. It's not a pretty picture and the data show six straight months of total machines sales declines. It's obviously a concern and suggests the company's earnings will come under concerted pressure in the future. However, there are three key reasons why investors shouldn't lose heart. They are all based on the idea that the construction equipment stock will pass the worst of it in the near future. 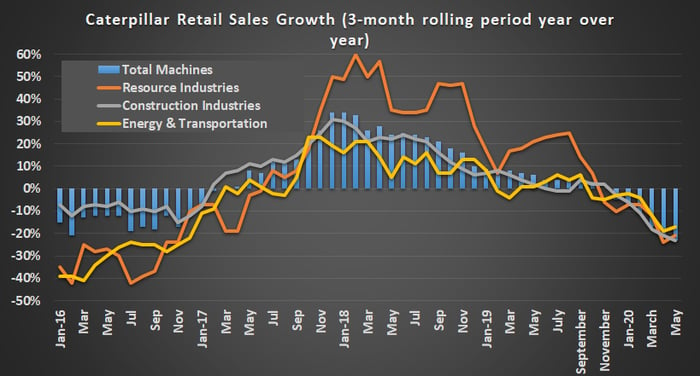 First, keep in mind that these figures represent three-month rolling growth figures compared to the same period last year. As such, the May figures contain the March-May period, which is likely to encompass the worst months of retail sales in Europe and the U.S. There's not a lot that Caterpillar's dealers can do when they are faced with lockdowns and isolation measures. In a nutshell, what you are seeing in the numbers is more of an external, temporary shock rather than a lasting, company-specific problem.

A regional breakout gives better color on the underlying trends. China is the country of origin of the COVID-19 pandemic and therefore it can be looked at as a leading indicator for the U.S. and Europe. As you can see below, Asia-Pacific total machine retail sales were only down 1% in the most recent period. In addition, rolling three-month construction industry retail sales were actually up 2% in Asia-Pacific in May.

While it's important to note that this could represent merely a release of pent-up demand following the relaxing of lockdown measures in Asia, it also serves as a reminder that the current data in Europe and the U.S. is probably not reflective of the trend that's likely to follow when the June numbers start feeding into three-month rolling sales data in those regions. Simply put, Caterpillar's sales data will get better. 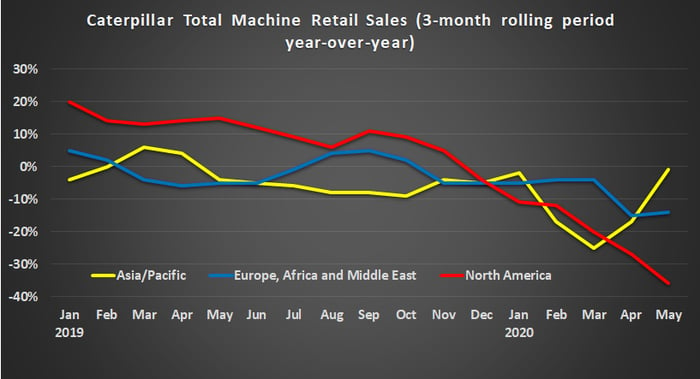 Third, there's evidence that some of Caterpillar's end markets are improving. For example, the prices of oil and cyclical metals like copper have recovered from the lows seen earlier in the year, which might encourage oil and gas and mining companies to pull back on cutting their capital spending budgets.

In addition, Union Pacific CFO Jennifer Hamann recently gave a presentation at a conference and spoke of strength in major highway projects leading to growth in aggregate shipments -- a positive sign for demand for Caterpillar's aggregate machinery equipment.

Meanwhile, a combination of a recovery in China's construction market and the possibility of stimulus spending on infrastructure in the U.S. could give Caterpillar a boost down the line. 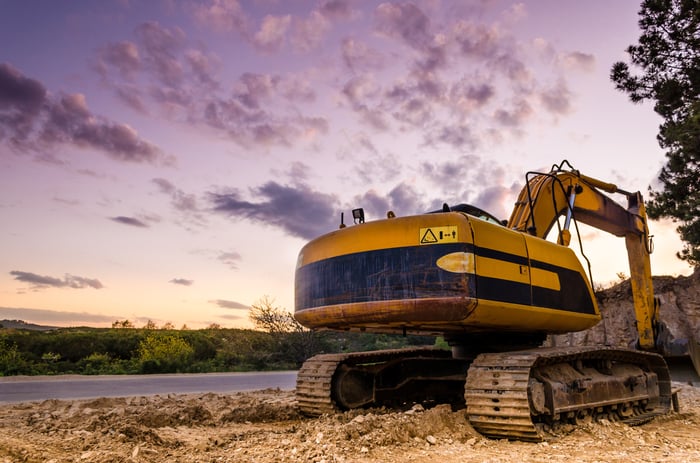 What it means for Caterpillar investors

For reference, management previously spoke about free cash flow hitting a bottom of $4 billion through the cycle, which would provide ample coverage for its $2.3 billion dividend payout. As such, Caterpillar remains a good option for dividend investors, even if it's going to take the company a few years to get back to 2019 levels of revenue.

It's not an awe-inspiring outlook, and the sales data certainly suggests a very difficult trading environment in 2020, but if dividend investing is your aim, then Caterpillar is worth a look.

Earn Passive Income for Years With This Dividend Aristocrat
349%