Please ensure Javascript is enabled for purposes of website accessibility
Log In Help Join The Motley Fool
Free Article Join Over 1 Million Premium Members And Get More In-Depth Stock Guidance and Research
By Anne Burdakin – Jun 25, 2020 at 8:10AM

Shoppers are back: May retail sales were up 17.7%.

But off-price stores like TJX Companies (TJX 1.27%) can flourish in this environment thanks to lessons learned during other sharp economic downturns.

TJX, which owns off-price retailers TJ Maxx, Marshalls, and HomeGoods, had a horrible first quarter in which revenues were slashed by about half year over year.

The company could withstand it, having taken preemptive financial steps when the U.S. began responding to the novel coronavirus. TJX went into full cash-conserving defensive mode, furloughing most of its 286,000 employees, suspending its stock repurchase program and dividend, and cutting compensation for executives and board members until July. TJX also temporarily closed its online business -- a counterintuitive move given how much shopping went digital during the COVID-19 shutdown.

But management saw plenty of opportunity waiting once the company could reopen and earmarked some of the cash saved for inventory purchases. Suppliers and cash-strapped retailers were stuck with massive amounts of perfectly good inventory due to mandated store closures. They struck deals with TJX to take merchandise off their hands at bargain prices. TJX plans to sell it for a tidy profit while still offering the consumer a great deal. 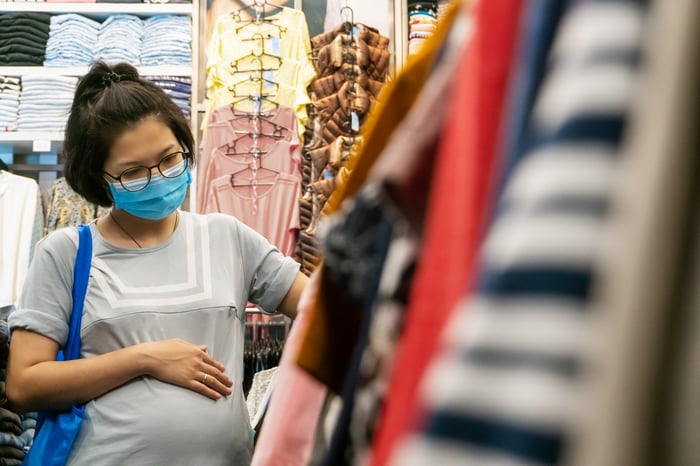 Management gets its expectations from the company's 43-year history. During the Great Recession, net sales maintained their steady rise, growing 3.6% in fiscal 2009 and another 6.8% in fiscal 2010. Shoppers clearly gravitated toward value prices during the period of financial stress and hardship (and afterwards as well).

The company intends to reap gains from the current post-shutdown opportunity too. Pressures are much the same now, given high unemployment and general uncertainty about the future.

The U.S. Census Bureau released advance estimates of U.S. retail sales on June 16 for May 2020. Following April's negative retail results, retail bounced back in May. Overall retail sales in April ended down 14.7%, but May results soared the other way to finish up 17.7% sequentially. Analysts had expected 8.4% growth in May.

As for TJX, stores began reopening May 2, and the company reported fiscal 2021 first-quarter results on May 21. At that time, the company reported that of the 1,100 stores that had been open more than a week, sales had improved year over year. TJX expects to have all stores open by the end of June. Online operations have also resumed.

While the company won't be able to get through the pandemic completely unscathed, it does have $4.3 billion of cash on hand. Management believes it is prepared to weather a 50% sales decline over nine months, which is a worst-case scenario.

TJX sports a forward price-to-earnings (P/E) ratio of 34 with shares down 16% since the beginning of the year. Though Wall Street expects sales and earnings for the company to be down this year, it also expects a strong rebound next year. As soon as stores are allowed to reopen, the off-price retailer is poised to attract shoppers looking for good deals.

And the company has the cash to take inventory off the hands of manufacturers and retailers anxious to raise cash, which should help grow its margins. Additionally, the company's HomeGoods stores sell a completely different product mix that's not dependent on the whims of fashion. HomeGoods specializes in kitchen, bed, bath, pet accessories, and other items for the home.

Some expectations have already been built into the share price, but I think there is still plenty of room for it to run as pent-up demand is met. Everybody wants a good deal on quality merchandise, and TJ Maxx, Marshalls, and HomeGoods are leaders in that niche. If investors have a medium- to long-term time horizon, TJX is a good pick for the portfolio, and I think investors will be rewarded nicely over time.