Please ensure Javascript is enabled for purposes of website accessibility
Log In Help Join The Motley Fool
Free Article Join Over 1 Million Premium Members And Get More In-Depth Stock Guidance and Research
By Leo Sun – Jun 26, 2020 at 11:51AM

Which OLED stock is the better overall investment?

One of Universal's top customers is LG Display, which produces TFT-LCD and OLED panels for a wide range of markets. OLED screens are more power efficient than LCD screens because they turn individual pixels on and off, and the newer technology produces higher contrast ratios.

Over the past five years, Universal Display's stock rallied roughly 180% as LG Display's stock tumbled nearly 60%. Let's see why Universal outperformed LG by such a wide margin, and whether that trend will continue over the next few years. 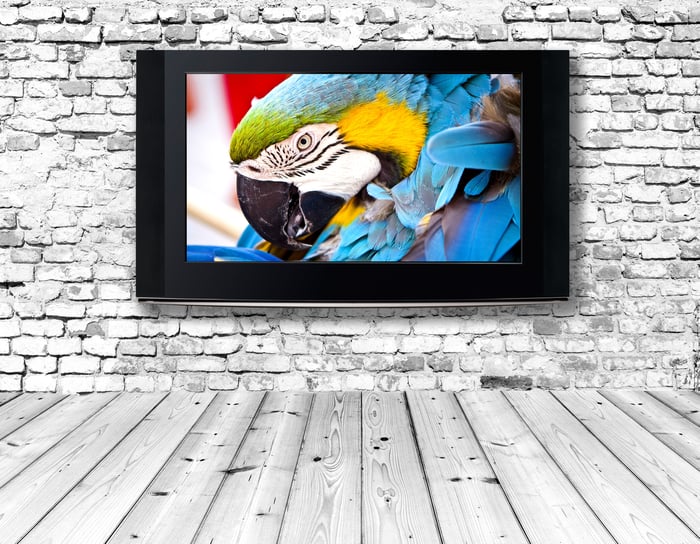 Universal Display generated 59% of its sales from materials last quarter. Another 38% came from royalties and licensing fees, and the remaining sliver came from contract research services.

All three units generate high-margin revenues since Universal doesn't shoulder the overhead costs of manufacturing or marketing the finished display panels. Demand for OLED panels has gradually risen across multiple industries, including TV and phone makers, as consumers upgrade their older LCD devices.

LG Display runs a lower-margin business manufacturing TFT-LCD and OLED panels. It pays Universal for its materials and patents. As a result, the gap between Universal and LG's operating margins over the past five years is staggering: 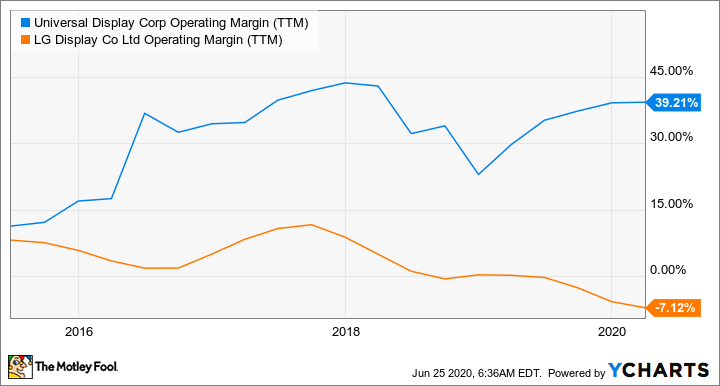 LG doesn't disclose its TFT-LCD and OLED revenues separately, but it's pivoting away from the highly competitive, lower-margin LCD market by selling more OLED screens. However, it faces stiff competition in the mobile OLED market from its South Korean rival Samsung.

Last quarter, LG generated 32% of its revenue from mobile device makers, another 31% from the TV market, 17% from desktop PCs, 12% from notebooks, and the remaining 8% from tablets. All of those markets are heavily saturated, face longer upgrade cycles, and were hit by supply chain disruptions throughout the COVID-19 crisis.

Universal's revenue rose another 28% annually in the first quarter, which bore the full impact of the COVID-19 pandemic, and its net income grew 21%. Universal withdrew its guidance for the full year, due to pandemic-related disruptions of the OLED supply chain, but its growth should stabilize as the pandemic passes and OEMs launch new 5G smartphones.

LG Display saw revenue decline by 4% last year and posted a net loss. Revenue tumbled another 20% year over year in the first quarter, while its net loss more than tripled, because of declining panel shipments across its core markets.

LG didn't provide any guidance for the rest of the year, but the macro headwinds won't fade anytime soon. Fierce competition from Samsung and other panel makers will likely exacerbate the pain, cap its pricing power, and prevent it from turning a profit this year.

Universal's stock isn't cheap at over 50 times forward earnings and 17 times this year's sales forecast. LG Display looks much cheaper at less than one times this year's revenue. However, investors are willing to pay a premium for Universal Display for obvious reasons.

Investors should be aware of Universal's frothy valuation, but buying it as a long-term growth play is wiser than catching a falling knife like LG Display.