Please ensure Javascript is enabled for purposes of website accessibility
Log In Help Join The Motley Fool
Free Article Join Over 1 Million Premium Members And Get More In-Depth Stock Guidance and Research
By Rich Smith – Updated Jun 26, 2020 at 9:40AM

Virgin Galactic (SPCE 3.15%), the space tourism company founded by British billionaire Richard Branson, is on record saying it expects to begin carrying paying passengers to the edge of space this year, and possibly as early as this summer. Once these space tourism trips have begun, the company has promised investors it will quickly turn profitable, possibly as early as next year.

That's two "possibilities" in a row, but on Thursday, Virgin Galactic took another step toward making them both a reality.

Flying out of Spaceport America in New Mexico on Thursday afternoon, Virgin Galactic carrier aircraft VMS Eve released its VSS Unity spaceplane to conduct a glide test from 51,000 feet to first maneuver in the air and then conduct a runway landing. This was the company's second glide test conducted in New Mexico airspace. 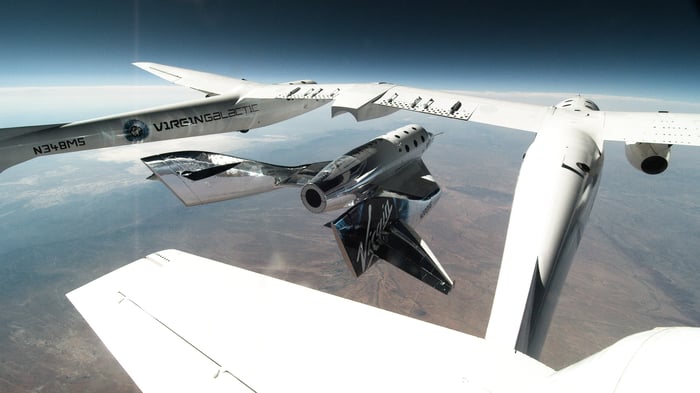 The VSS Unity being released from the VMS Eve on June 25. Image source: Virgin Galactic.

During the flight, Unity did not fire its rocket engines, but nonetheless reached speeds as high as mach 0.85 during its descent, and reportedly handled the trip flawlessly.

Virgin Galactic said it will be analyzing data generated from this latest test flight and then begin the next stage of its flight test program in preparation for conducting commercial operations. Sometime in the next few months, Eve will carry Unity to altitude, release the spaceplane, and then watch it rocket to the edge of space before landing.

After completing Thursday's test flight, Virgin Galactic gave no new details on its precise timeline for conducting the powered spaceflight, nor on when commercial operations will commence. CEO George Whitesides did confirm that the tech company's "focus for this year remains unchanged." That would seem to imply that plans to begin flying passengers to space this year, and begin generating revenue for Virgin Galactic, remain unchanged as well.