Please ensure Javascript is enabled for purposes of website accessibility
Log In Help Join The Motley Fool
Free Article Join Over 1 Million Premium Members And Get More In-Depth Stock Guidance and Research
By Cory Renauer – Jun 29, 2020 at 9:13AM

After an unbelievable week, Investors want to know if these drugmakers have what it takes to keep climbing.

Last week, the top-performing biotech stocks had something in common and by now you can probably guess exactly what that was.

You got it. They both delivered positive press releases regarding their respective coronavirus vaccine candidates.

This clinical-stage biotech is working on vaccines delivered in the form of easy to swallow tablets. Vaxart stock exploded higher last week after the company's SARS-CoV-2 vaccine candidate was selected to receive extra assistance through the U.S. government's Operation Warp Speed program. 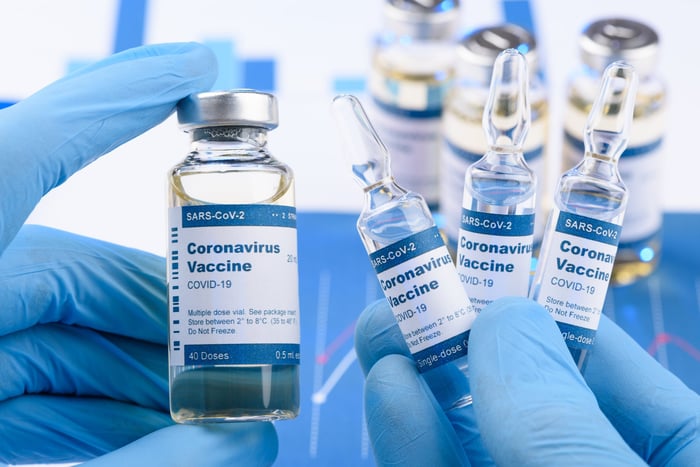 If non-human primate studies with Vaxart's vaccine candidate are successful, the government will most likely pick up the tab for clinical trials too. As an easy-to-distribute tablet, Vaxart's candidate could have a leg up on competitors if it makes it that far.

This biotech has earned a reputation for quickly developing new DNA vaccine candidates to address infectious disease outbreaks. Since incorporating in 2001, the company has started clinical trials with DNA vaccines aimed at MERS, Ebola, and Zika virus before turning to the novel coronavirus immediately after its genetic sequence became available.

Inovio's stock price has been rising all year thanks to the company's rapid progress in early development stages. Earlier this month, Inovio began injecting people in a phase 2 clinical trial with their first dose of its SARS-CoV-2 candidate, INO-4800.

Last week the stock popped again after investors learned the U.S. Government would support the rapid manufacturing of a special DNA delivery device required to inject people with doses of INO-4800. By the end of the month, the company expects to report interim data from a phase 1 trial and positive results could send the stock higher still.

While Operation Warp Speed aims to provide Americans with a safe, effective vaccine by January 21, it's important to realize that Vaxart can't possibly make this deadline if the company doesn't start testing real people immediately. Since the company's still in the middle of the preclinical-stage process, this doesn't seem likely.

Investors should know that Vaxart has been around since 2004, but it still doesn't have any late-stage clinical trial successes under its belt. The company's most advanced candidate beyond its SARS-CoV-2 program is a seasonal influenza vaccine. Vaxart still hasn't started a phase 3 study since producing underwhelming results during a phase 2 trial that wrapped up in 2017. While the stock could pop again if Vaxart's coronavirus vaccine candidate succeeds, its lackluster track record makes taking this bet a bad idea.

Inovio's another company that has started a lot of programs, but each one has fizzled out in mid-stage clinical trials. This is another stock best avoided until the company can show us some solid evidence that its vaccine technology actually works.