DraftKings (NASDAQ:DKNG) has been one of the hottest stocks of 2020. This is somewhat surprising considering that DraftKings enables users to bet on sports, and there haven't been many sports to bet on lately.

Regardless, the stock has performed well, and the company is taking full advantage of this momentum. On June 23, DraftKings sold an additional 46 million shares in a public offering in addition to the IPO it completed in April. Many of these additional shares came in the form of insiders cashing out portions of their stock holdings. Should investors view this insider selling as a red flag or just a sign of healthy demand for the stock?

It's worth noting that DraftKings did not have a typical IPO. Instead, the company merged with an already-public special purpose acquisition company (SPAC), which effectively brought the company public. The merger with the SPAC created a market for DraftKings stock. Initially, the stock traded around $15 per share, but has rallied to as high as the mid-$40s. 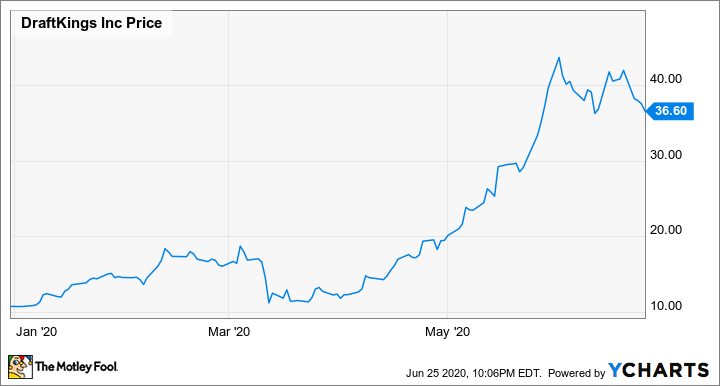 In a typical IPO, a company's insiders will establish a lock-up agreement with the early investors in order to not flood the market with additional shares, which may put downward pressure on the stock price. However, there was no such agreement with DraftKings' offering. The high stock price and lack of a lock-up paved the way for the latest offering.

In the company's most recent share offering, it raised cash by issuing 16 million new shares, but it also enabled existing shareholders to sell 30 million shares at $40 per share. In total, this brought 46 million shares to the public.

DraftKings is currently unprofitable and requires capital to invest in the growing online sports betting market. So, the rationale for raising $640 million in fresh funds is clear. However, most insiders had an opportunity to sell shares in the IPO transaction completed in April. The fact that insiders sold an additional 30 million shares (slightly less than 10% of total shares outstanding) can be interpreted as the insiders viewing the valuation as rich.

The investors selling the most stock include board members Shalom Meckenzie and John Salter, CEO Jason Robins, and venture capital firms Redpoint Ventures, Atlas Venture, and Revolution Growth, among many other sellers. Of course, insiders should monetize their investment, especially if they can do so at attractive prices, but new investors at DraftKings should invest with eyes wide open.

Many investors view DraftKings as a promising growth stock. DraftKings, along with FanDuel (owned by Flutter Entertainment), is a leader in the fast-growing market for online sports betting in the United States. Some estimates peg the online gambling market as exceeding $10 billion in annual revenue by 2025, from virtually no revenue as recently as 2018.

On the other side of the debate, DraftKings' market cap exceeds $10 billion, which indicates that investors are already pricing in rosy growth assumptions. In addition to its high valuation, there are risks that online sports gambling may not be legalized in as many states as expected, or that DraftKings will not command a leading market share.

Bulls and bears both have interesting arguments, and only time will prove which camp is correct. Many insiders are voting with their wallets and have taken some money off the table. That being said, insiders and early investors continue to own a large percentage of the company.