Please ensure Javascript is enabled for purposes of website accessibility
Log In Help Join The Motley Fool
Free Article Join Over 1 Million Premium Members And Get More In-Depth Stock Guidance and Research
By Dan Caplinger – Updated Jun 29, 2020 at 8:55AM

For those who don't want the risk of investing 100% of their money in high-flying stocks, these companies fit the bill.

2020 has reminded investors that the stock market is risky. After a more than decade-long bull market, the COVID-19 pandemic sent stocks plunging 30% in just a month, rattling investors who'd forgotten just how volatile their portfolios can be.

The subsequent recovery, though, also served as a reminder. Although short-term price movements won't reflect long-term prospects, strong companies recover in time. Some of the best performers have been high-growth upstarts in the technology industry that have proven their value to the business world during coronavirus-related shutdowns. Investors who put their money into those companies -- think Zoom Video Communications, for example -- have seen amazing returns.

If you have an extremely long time horizon and can weather the inevitable ups and downs involved with growth stock investing, then keeping the bulk of your portfolio in those high-flyers can be a solid strategy. But if you're feeling nervous about being too far out on a limb, then you might prefer adding some reliable go-to stocks to give yourself some valuable diversification. To protect your portfolio, consider taking $2,000 and putting it into these three stocks before the next market crash. 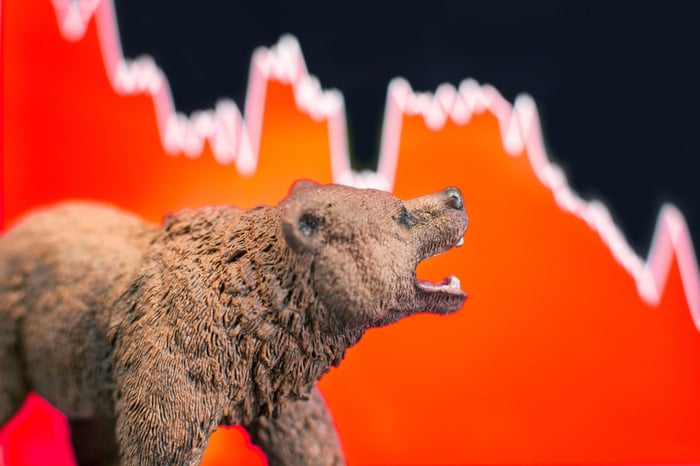 Walmart (WMT 1.88%) has been known as a strong defensive stock for decades. The retail giant's emphasis on low-priced goods makes it resonate with customers during tough economic times, and with some saying that the U.S. economy is already in a recession, Walmart can expect to see millions more customers come through its doors as they shift their shopping away from higher-end retail chains.

Don't make the mistake of thinking that Walmart is just a stodgy old-economy company, though. The retailer has made a huge push in recent years to bolster its presence in the e-commerce arena, and it's built a marketplace of third-party sellers that is intended to go up against the leaders in online retail. Curbside pickup and same-day delivery have become popular options especially during the pandemic, and Walmart is using its extensive store network to open up opportunities that online-only retailers simply can't pursue.

In past bear markets, Walmart has performed well, and its stock didn't fall nearly as much as the broader market during this past winter's COVID-19-prompted plunge. Walmart stock won't double in the next year, but it has the potential to deliver consistent returns over time.

Among big tech stocks, Alphabet (GOOG 3.14%) (GOOGL 3.01%) has found itself lagging behind the pack. Outsized gains for rivals like Apple, Microsoft, and Amazon.com left the Google parent's shareholders feeling completely left out of the end stages of the bull market over the past few years.

More recently, though, investors have started to see Alphabet's overall potential in a new light. Despite weaker ad spending, usage of Google services rose dramatically when stay-at-home orders went into effect. Even as the economy has started to reopen, Alphabet has taken steps to protect itself from longer-term impacts of the pandemic if future waves resurface.

Alphabet stock isn't exactly bargain-priced, but its earnings multiple is less than those of its closest tech peers. With a business that will stand the test of time, even conservative investors can look at Alphabet as a solid play for their portfolios.

Wireless networks have become more important than ever, and Verizon Communications (VZ 3.50%) has been a leader in the U.S. wireless business for years. The company is now engaged in a grand effort to build out 5G network capabilities, delivering upgraded service to its customers in a manner that should keep them loyal to their service providers.

With Verizon, investors don't just get the growth potential of 5G . You also get a dividend yield that's currently around 4.5%, more than double what the broader market would pay you on average.

Success isn't guaranteed for Verizon, as shifting consumer preferences could threaten its leadership position against its rival carriers. Moreover, its stock price didn't prove invulnerable to the coronavirus bear market. Yet with its shares trading at about 12 times both its trailing and its forward earnings, there's a margin of safety in Verizon that should provide some downside protection.

Staying invested in the market in good times and bad is the hallmark of a true long-term investor. That doesn't mean you have to stay exposed to high-risk companies all the time. By putting some money into these three stocks, you'll position your portfolio to handle whatever the markets throw your way.