Investing in restaurant stocks these days may require nerves of steel and an iron cast stomach. The pandemic has taken its toll on eat-in dining, and now we have a recession weighing on how much we can spend on food.

There are still some tasty opportunities out there among restaurant stocks. Wingstop (NASDAQ:WING), Chipotle Mexican Grill (NYSE:CMG), McDonald's (NYSE:MCD), Shake Shack (NYSE:SHAK), and Domino's Pizza (NYSE:DPZ) are five stocks positioned well to thrive in the second half of this year. Let's go for a fiscal taste test. 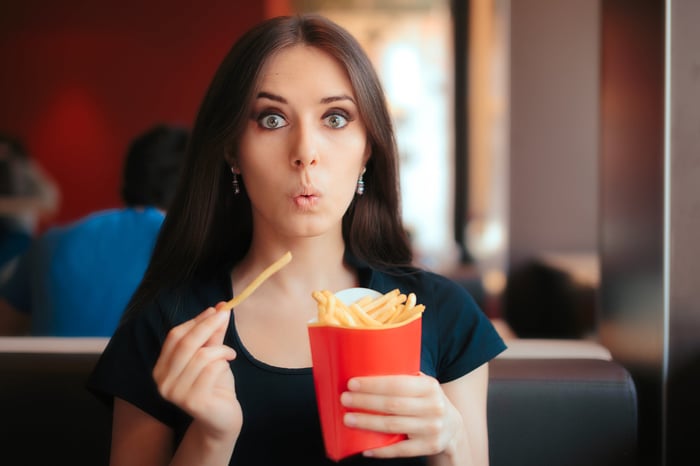 Some restaurant chains are sputtering these days, but Wingstop hit another all-time high on Friday. It's bucking the industry malaise, and that's on the strength of its model that's perfect for the current environment. Wingstop watches over an empire of 1,413 largely franchised locations.

The savory chicken wings specialist has a dining room, but most of its business is takeout and delivery. Off-premise sales accounted for 80% of its domestic sales before COVID-19, and digital sales were already covering 40% of its business. Wingstop hasn't missed a beat since initially shutting down its dining rooms in mid-March. Comps rose 8.9% in the second half of March, and actually improved in April. Wingstop was a star before, rattling off 16 consecutive years of positive comps. It's continuing to thrive in the current climate.

Chipotle hasn't been as resilient as Wingstop during the downturn. Comps were down 35% during the final week in March before improving a decline in the high teens a few weeks later. We'll find out how it fared in the second quarter in three weeks.

Chipotle is still a name to watch in this market. It's the market darling championing the fast casual segment that straddles casual dining food quality with the convenience of fast food. The chain's stock has more than tripled since former Taco Bell chief Brian Niccol replaced the concept's founder CEO two years ago. It was already making a big push for digital sales with an enhanced app and strong support of third-party delivery platforms. It's also been embracing drive-through "Chipotlanes" at newer locations, giving it another way to serve its "food with integrity" eats as quickly as possible.

It's not just the arches and fries that are golden at McDonald's. The world's largest burger chain has started to recover from the pandemic, with all but 5% of its restaurants worldwide now open. Another plus for McDonald's is its global reach, something that's coming in handy with Asia and Europe further along on the path to recovery. There's also something to be said about its penchant for affordable comfort food that has proved recession-resistant in the past.

McDonald's isn't growing as quickly as Wingstop or Chipotle, but it's earned its stripes as an all-weather winner. It also packs a more reasonable valuation than Wingstop or Chipotle, and its 2.7% yield in today's low-interest rate environment is impressive pocket change. McDonald's has also increased its payout every year since initiating its dividend policy in 1976.

Among the five names on this list, no chain was pinched as hard during the early stages of the coronavirus outbreak as Shake Shack. The gourmet burger chain broke out its weekly unit-level sales through the end of April earlier this year, and it wasn't pretty.

Comps for the week ending:

In the same final week of March in which Chipotle hit rock bottom with a 35% year-over-year slide in comps, Shake Shack's 73% plunge takes the cake. However, with more locations now open and Shake Shack stepping up its digital game it's an interesting stock trading for less than half of last year's high. Shake Shack and Chipotle are cult faves with dedicated followings. They stand a better chance of bouncing back as discerning diners single out their next out-of-home meal.

Wingstop isn't the only chain that has entered this pandemic without skipping a beat. Domino's -- like most pizza chains -- has always been all about delivery and takeout. It was already deriving 70% of its sales digitally, so it was positioned perfectly as a place for folks abiding by shelter-in-place orders to enjoy food from the outside world.

Domino's may not be a cool pizza joint with your foodie friends, but it's a consistent performer worldwide. The 1.6% increase in comps it posted for its U.S. pizzerias stretches its streak of positive unit-level sales to 36 quarters. If you think that's impressive consider that it has cranked out 105 consecutive quarters of positive comps internationally. That's not a typo. That is more than 26 years of international unit-level growth. Pizza may be the last thing on your mind when you're looking for safe stocks -- unless your stomach's rumbling -- but Domino's Pizza is well-suited to satisfy either hunger.