Please ensure Javascript is enabled for purposes of website accessibility
Log In Help Join The Motley Fool
Free Article Join Over 1 Million Premium Members And Get More In-Depth Stock Guidance and Research
By Dan Caplinger - Jul 1, 2020 at 10:38AM

The office products retailer is still facing the same challenges it has had for years.

It's not every day you see a stock's share price jump more than 800%, but in a market that has seen a surge in day-trading activity, it might seem like anything's possible. Unfortunately, the news that's sending Office Depot's (ODP 0.70%) stock price into the stratosphere isn't cause for celebration.

Office Depot has been under pressure for years, as the office products retailer's stock has lost two-thirds of its value since 2015. Competition from online retail has made Office Depot's brick-and-mortar store look costly by comparison, and business has fallen off steadily. Revenue growth has disappeared, and profits have waned. And now, the latest move from the retailer simply indicates Office Depot's recognition that it's unlikely to make a huge amount of progress in making a full recovery.

Why Office Depot's stock is soaring

Office Depot announced last week that it would move forward with a reverse stock split of its shares. The move had been telegraphed for a while, with shareholders having approved a reverse split during Office Depot's annual shareholder meeting in May. At the meeting, though, investors didn't know exactly what the terms of the reverse split would be. 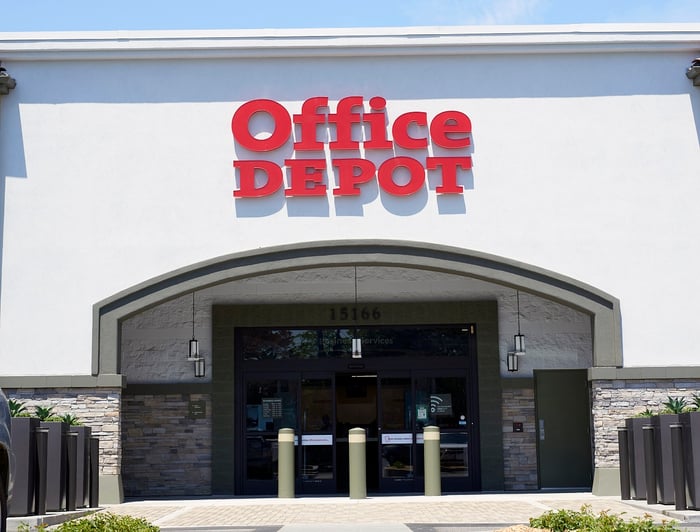 Office Depot chose a 1-for-10 ratio for its reverse split. Accordingly, the company cut its number of authorized shares from 800 million to 80 million.

What that means for investors is that for every 10 shares of Office Depot they owned prior to the reverse split, they'll now own only a single share. And although the price jumped from $2.35 per share at Tuesday's close into the low $20s Wednesday morning, the net value of the new Office Depot shares that each investor will own is definitely not going up 800%.

Anyone who owned a number of shares that wasn't a multiple of 10 will receive a small amount of cash in their brokerage accounts. Office Depot won't issue fractional shares, although it's possible that some brokers might take it on themselves to offer them rather than making cash payments.

No cause for celebration

Back in April, Office Depot explained why it was looking to do a reverse split. In its proxy materials asking for shareholder approval, the retailer offered the following list:

In general, the idea boils down to making Office Depot look like a more successful company so that it can hopefully tap into opportunities that its low-priced stock has left closed.

Unfortunately, long-term investors have to focus primarily on the fundamentals of a business. Among retail stocks , business conditions are tough right now. Nothing about the reverse stock split really speaks to any likely improvement in the conditions Office Depot's facing.

It's true that Office Depot gave shareholders a glimmer of hope in its first-quarter financial report. Same-store sales rose 2% year over year, and although total revenue inched lower, earnings were far better than many had feared. Yet with store closures related to the COVID-19 pandemic having worsened in the second quarter, Office Depot's next report could be ugly.

Be hopeful but realistic

A few companies have been able to bounce back from reverse stock splits and find success. It's much more common, unfortunately, for businesses to continue to lose ground following such moves -- again, because the reverse split in itself doesn't change anything about the situation the company's in.

The fact that Office Depot chose a 1-for-10 ratio -- the most extreme that shareholders allowed -- gives a hint about just how much uncertainty the company itself sees in its future. Investors need to temper their hope for a recovery with a realistic assessment of Office Depot's prospects in any increasingly difficult and cutthroat industry.