For much of the past decade, J.C. Penney (JCPN.Q) has been trying to turn itself around, after a slew of management missteps and declining mall traffic crushed its sales and earnings. It finally ran out of time this spring, due to the severe impact of the COVID-19 pandemic. The iconic retailer filed for Chapter 11 bankruptcy in mid-May, with the hope of shedding much of its debt and unwanted store leases so that it could emerge as a smaller, more profitable company.

However, all of the upheaval J.C. Penney has experienced in recent years made it less able to handle a crisis like the pandemic that has swept across the U.S. As a result, even within the department store sector, rivals like Kohl's (KSS -1.64%) have been eating its lunch. That is jeopardizing J.C. Penney's ability to successfully emerge from bankruptcy.

Most department stores closed all of their stores in mid-March and didn't even begin to reopen for in-store shopping until May. That led to huge sales declines across the sector last quarter.

That said, J.C. Penney was particularly hard hit. This week, the company reported that net sales plunged 55.6% year over year to $1.08 billion in the first quarter (the period ending in early May). By contrast, net sales fell 43.5% at Kohl's over the same period.

There are probably three main reasons why sales did not decline nearly as much at Kohl's as at J.C. Penney last quarter. First, Kohl's has routinely posted better sales results than its struggling rival over the past few years. 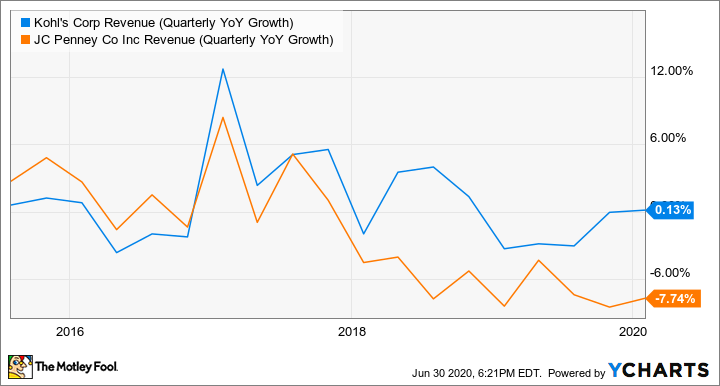 Second, whereas J.C. Penney is heavily reliant on mall traffic -- which started to plunge before malls officially closed -- only about 5% of Kohl's stores are in malls. Third, Kohl's has a strong e-commerce business, which accounted for 24% of its sales in fiscal 2019. By contrast, J.C. Penney's digital sales penetration was less than 15% last year. With e-commerce being the only sales channel that was open for the last six weeks of the first quarter, this difference had a big impact on sales.

While there was a meaningful gap in sales performance between J.C. Penney and Kohl's last quarter, the differential exploded in the month of May. By May 19, Kohl's had reopened about half of its stores. In the initial period after reopening, those stores averaged 50% to 60% of their 2019 sales productivity. Moreover, at a recent investor conference, Kohl's management disclosed that digital sales surged 90% year over year in May. The rapid rollout of curbside pickup contributed to this quick rebound in sales trends.

Kohl's doesn't publish monthly sales reports, but the datapoints it provided for the month of May imply that sales may have declined roughly 40% year over year. Management also indicated that in-store sales trends accelerated significantly in early June, while online demand remained strong.

By contrast, J.C. Penney reported last week that sales plummeted 73.5% to just $266 million in the four-week retail month of May. Lower digital sales penetration, a slower cadence of store reopenings, less-agile management, and a continuing reluctance among many consumers to visit malls were all likely contributors to this dreadful sales performance. Most notably, J.C. Penney's e-commerce sales rose just 15.7% year over year in May: a stark contrast to Kohl's 90% growth.

Plenty of stakeholders want J.C. Penney to survive. Most notably, a pair of major mall owners are seriously considering an attempt to buy the company out of bankruptcy, which would help them limit the number of near-term anchor vacancies at their properties.

That said, no potential acquirer would want to pour money into a company that has no shot at a successful turnaround. J.C. Penney's steep sales declines and market share erosion over the past few months highlight the risk that its customer base will just melt away in favor of competitors like Kohl's, Target, and various off-price retailers.

To be fair, there were some hopeful signs of traffic returning to J.C. Penney stores in late May. However, the recent resurgence in COVID-19 cases could derail the ongoing recovery in mall traffic. That would make retailers more reliant on e-commerce again: an area where J.C. Penney has been underperforming dramatically.

J.C. Penney isn't doomed yet. But unless it can stem the tide of customer defections quickly, it could fail to attract the funding it would need to emerge from bankruptcy successfully, leading to the demise of this storied brand.

AMC, J.C. Penney, and Norwegian Cruise Lines: One of These Is a Screaming Buy
401%