Please ensure Javascript is enabled for purposes of website accessibility
Log In Help Join The Motley Fool
Free Article Join Over 1 Million Premium Members And Get More In-Depth Stock Guidance and Research
By Zhiyuan Sun – Jul 2, 2020 at 10:32AM

Which of these companies that are developing cutting-edge gene-editing technologies is the better buy for investors?

CRISPR stands for Clustered, Regularly Interspaced, Short Palindromic Repeats. It is an emerging gene-editing technology that can rapidly locate and change genome sequences to deliver a cure for certain hereditary diseases. Since CRISPR was discovered in 1987 by Japanese researchers, the technology has taken the biotech industry by storm.

Indeed, two companies that focus on CRISPR therapies, Editas Medicine (EDIT 3.19%) and Intellia (NTLA 2.54%), have achieved more than $1 billion in market capitalization despite having candidates in the infant stages of the clinical trial process. Today's let's take a look at which of the two companies is a better choice for biotech investors. 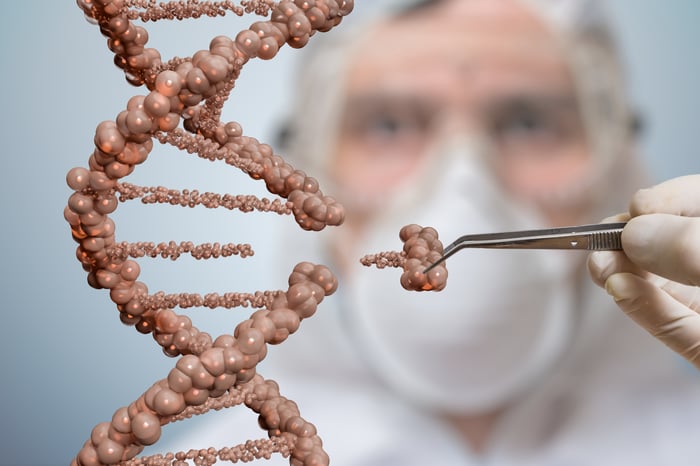 What Editas is doing

Currently, Editas has four pipeline candidates involving CRISPR. One of them, EDIT-101, has advanced to phase 1 clinical trials. In fact, the medicine is the first-ever CRISPR therapy to be administered to patients with Leber congenital amaurosis 10. This is the most common disease in a group of retinal degenerative disorders caused by mutations in at least 18 different genes. Patients with LCA10 have vision loss within the first few years of life.

An estimated 3 in 100,000 children around the world suffer from LCA, with 20% to 30% having the LCA10 version. There are currently no treatment options available for the condition. The company expects dosing for EDIT-101 to complete in at least one of the trial's cohorts by the end of the year. The trial is intended to measure both the safety and the efficacy of EDIT-101.

What Intellia is doing

Intellia has three in vivo (within a living organism) CRISPR candidates in its pipeline, none of which have made it to phase 1 clinical testing. The candidate that has advanced the furthest, NTLA-2001, is being investigated for the treatment of transthyretin amyloidosis, a rare condition involving the buildup of an abnormal protein in the body's organs and tissues. The company plans to submit an Investigational New Drug Application with the U.S. Food and Drug Administration (FDA) to begin testing NTLA-2001 in phase 1 by the end of 2020.

However, the company also has an ex vivo (outside a living organism) candidate in which the therapy is derived from CRISPR with OTQ923, which has been approved as an Investigational New Drug. OTQ923 will be given to patients with severe complications of sickle cell disease, a rare genetic disorder resulting in abnormally shaped red blood cells. It affects up to 100,000 Americans. The therapy should enter phase 1/2 clinical trials shortly.

Currently, Intellia has more than $250 million in cash and investments plus the ability to sustain its research and development operations by the end of 2021. Indeed, the company only recognized $46 million in total expenses in Q12020.

Meanwhile, Editas had more than $415 million in cash and cash equivalents compared with $56 million in operating expenses in Q12020, and just closed a new round of equity funding in June that increased its cash balance by $187.5 million. The fund-raising efforts give the company more than 24 months of runway for its investigations to continue.

The companies' market caps are similar, with Editas at $1.7 billion and Intellia's at $1.2 billion. However, I would argue Editas is slightly ahead with developing its CRISPR technology and finances. Hence investors interested in emerging biotech companies may wish to add it to their portfolios.