For stock investors, there really hasn't been anywhere to hide from the market debacle that's followed from the COVID-19 pandemic. All industries have been hit as investors dump risky assets.

It isn't too surprising that shares of biotechnology companies have fallen along with the rest, since they typically involve significant risk. On the other hand, the pandemic is drawing attention to the enormous strides the industry has made in developing new platforms for vaccines and therapeutics. We may be seeing the political threat that worried investors so much in 2019 dissolve before our very eyes as the world looks to some of these companies for help in the global crisis.

It isn't necessary to make risky and speculative bets to profit from biotech stocks in today's environment. Vertex Pharmaceuticals (NASDAQ:VRTX), Emergent BioSolutions (NYSE:EBS), and BioMarin Pharmaceutical (NASDAQ:BMRN) all have healthy and profitable growth, and are reasonably priced. 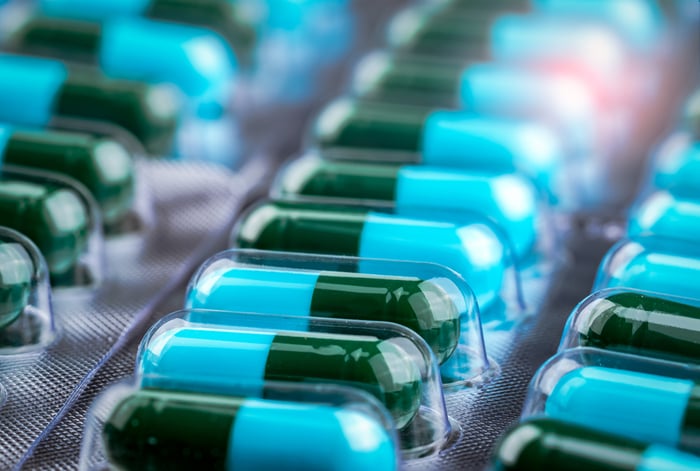 Vertex Pharmaceuticals is a biotech that dominates its key market in cystic fibrosis (CF), is growing rapidly, and is highly profitable. If that weren't enough to spark the interest of long-term investors, the company has promising drugs in its pipeline that could allow it to enter new markets in blood diseases and diabetes, and it is loaded with cash that it intends to use for business development deals.

The three medicines that have enabled Vertex to be the leader in treatments for CF are collectively approved to treat about half of the 75,000 CF patients in North America, Europe, and Australia. But it was an early approval of a fourth medicine with the potential to treat 90% of CF patients that boosted the stock last October. Trikafta, cited last year by market research firm EvaluatePharma as the most valuable research and development program in the entire pharmaceutical industry, is off to a fast start with $420 million in sales in the fourth quarter.

Vertex is building a foundation that should allow it to expand into new and lucrative disease areas. The company partnered with CRISPR Therapeutics on a gene-editing therapy for transfusion-dependent beta thalassemia and sickle cell disease, and reported positive safety and efficacy results in the first two patients treated for the indications. The company is also excited about its acquisition last year of Semma Therapeutics, which is working on a cell-based treatment for type 1 diabetes that it thinks has the potential to be a cure for the disease.

Vertex has $3.8 billion in cash to help it buy its way into new markets, and has said it will be active in business development in 2020.

Despite the momentum Vertex's business has, the stock is reasonably priced. Shares sell for 31 times analyst estimates of 2020 earnings per share, which are expected to grow 44% over last year.

Emergent BioSolutions could be the best biotechnology stock for investors who wouldn't ordinarily want to invest in biotechnology stocks. The company is arguably the most conservative pick among smaller companies in this space, with predictable revenue, steady profits, and a growing business.

Emergent sells vaccines and therapeutics to address public health threats and provides contract and manufacturing services to other companies in the industry. With the U.S. government being its largest customer, much of the company's business is from long-term contracts that produce a consistent and predictable flow of revenue. Emergent's products include vaccines for anthrax, smallpox, cholera, and typhoid; countermeasures for chemical terrorism threats such as nerve toxins; and Narcan, the nasal spray first responders use to treat opioid overdose.

Products to address public health threats are a growth business, as the current pandemic vividly illustrates. Revenue for 2019 was up 41% to $1.11 billion, with 7% coming from organic growth and the rest coming from acquisitions, which is a key strategy for the company. Emergent has added $600 million in annual revenue from its dealmaking since 2017 and intends to make more purchases soon. Organic growth should continue, thanks in part to a development pipeline of new vaccines and antitoxins. Emergent is also consistently profitable, with adjusted EPS growing 22% to $2.91 in 2019.

It is also among the companies trying to solve the COVID-19 crisis. It's working on a plasma-derived drug for the treatment and prevention of the disease and has announced agreements to supply development and manufacturing services to Novavax and Vaxart for COVID-19 vaccines.

Emergent's shares are about as cheap as it gets for biotechs. The stock sells for 17 times the consensus analyst estimate for 2020 earnings.

BioMarin specializes in drugs to treat rare genetic diseases, mostly in children, and the company's diversified portfolio of approved drugs has the company on the verge of profitability. For the full year of 2019, revenue grew 14% to $1.7 billion, with five out of six of its drugs growing sales. And its GAAP net loss fell to $23.8 million from $77.2 million in 2018. The fourth-quarter results show the momentum the company has, with revenue growing 29% and the company earning $0.08 per share, compared with a loss of $0.03 in the period a year ago.

BioMarin's accelerating growth should make 2020 its first full year of profitability. The company has guided to full-year revenue between $1.95 billion and $2.05 billion, or growth of 18% at the midpoint. Analysts expect adjusted EPS of $0.30 this year and $1.15 in 2021.

The company also has two potential blockbuster drugs in its pipeline that could keep its win streak going for years ahead. Valoctocogene roxaparvovec, mercifully nicknamed valrox, is the front-runner to be the first gene therapy for treating patients with hemophilia A. BioMarin's application for the drug has been granted priority review by the Food and Drug Administration, with a decision expected on Aug. 21.

A phase 3 trial for vosoritide, a drug for achondroplasia, a genetic disorder that causes dwarfism, reported positive results in December, and the company expects to file applications for it later this year.

Despite growing sales, a crossover to profitability, and a very promising late-stage pipeline, BioMarin's share price has gone nowhere for four years. At 7.5 times expected 2020 revenue, the stock is a bargain among biotechs now.