Please ensure Javascript is enabled for purposes of website accessibility
Log In Help Join The Motley Fool
Free Article Join Over 1 Million Premium Members And Get More In-Depth Stock Guidance and Research
By John Rosevear – Jul 2, 2020 at 11:01AM

Tesla (TSLA -1.10%) said that it delivered 90,650 vehicles in the second quarter of 2020, well ahead of analysts' estimates, led by strong demand for its smaller Model 3 sedan and new Model Y crossover SUV.

Combined deliveries of the Model 3 and Model Y totaled 80,050 in the quarter, Tesla said. The company's older and more expensive models, the Model S sedan and Model X SUV, accounted for the remainder, about 10,600 in total.

Tesla's result was well ahead of Wall Street's coronavirus-adjusted consensus forecast of 72,000 vehicles delivered in the quarter. Tesla's total second quarter production of 82,272 vehicles was also higher than expected, particularly given that the company's main factory in Fremont, California, was idled for all of April and part of May. 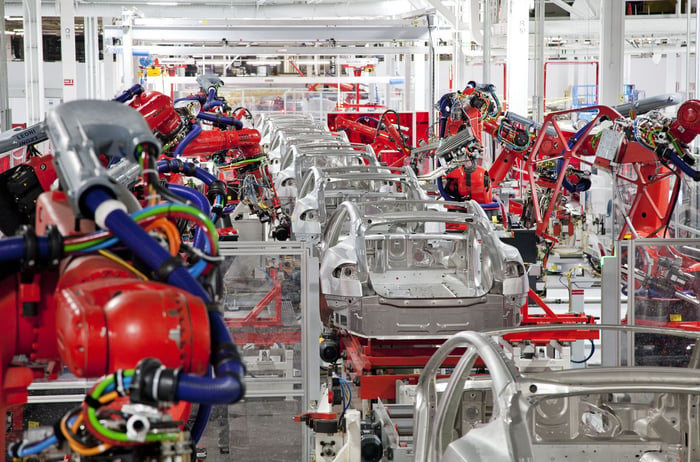 Tesla's main factory, in Fremont, California, is back up to full production speed, the company confirmed. Image source: Tesla, Inc.

It's not clear how many of those vehicles were produced by Tesla's second vehicle factory in Shanghai. The Shanghai plant was up and running throughout the quarter, but its production capacity is much smaller than the Fremont plant's.

In a brief statement, the company confirmed that its Fremont factory is now back up to pre-pandemic levels of production. Most other automakers with assembly plants in the United States, including Ford Motor Company (F -2.35%) and Fiat Chrysler Automobiles (FCAU), have also resumed production at or near their pre-pandemic rates.

Tesla said in January that it expected deliveries to "comfortably exceed 500,000 units" for the full year. The company has not yet revised that guidance; it delivered about 179,050 vehicles through the first half of 2020.

Tesla's stock price has risen about 190% since the beginning of the year.