The memory and storage manufacturing industry is an interesting one for sure. Unlike many proprietary chipmakers, memory companies produce commodity-like DRAM volatile memory, NAND flash storage, or hard disk drive storage components. The prices of these components can fluctuate with overall supply and demand, not unlike oil, silver, iron ore, or any other commodity. That can cause the earnings figures of memory companies to fluctuate wildly.

That has caused a lot of consternation among investors in Micron Technology (NASDAQ:MU), which reported its earnings on Monday, June 29. Going into earnings, there was a lot of fear that the overall economic hit from COVID-19 would cause demand to fall and memory prices along with it. However, the company delivered better-than-expected results, and also gave positive guidance for the following quarter.

Here's why that positive outlook could be just the start of things to come. 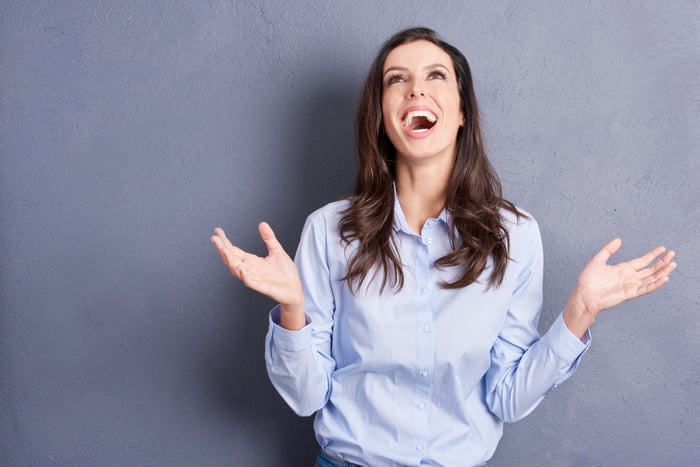 Past memory cycles tend to adhere to a usual pattern. First, demand surges above supply growth, leading to an increase in memory prices. Memory companies respond by producing more chips to capture the profit opportunity as prices rise and their profits surge. So memory companies build factories and buy equipment to crank out more bits.

Yet memory production is a very capital-intensive business, and supply cannot merely be turned on or off at the drop of a hat. Eventually demand peters out, either because customer demand stalls out or pricing becomes too high. This usually comes after memory companies have increased supply. Supply then overwhelms demand, and memory prices crash.

At the trough of the cycle, memory companies' profits fall, and they pull back on investment in new production. However, because memory and storage prices have crashed, technology companies buy more of it, stuffing mobile phones, laptops, and servers with more and more memory. Low prices thus leads to an increase in demand while suppliers pull back. Then, prices begin to rise, and the cycle starts again.

Micron's recent results point to a bottom, looking up

Micron's Monday earnings report showed an improvement over the prior quarter -- the first time that has happened in six quarters.

Not only that, but management also guided to a second straight quarter of growth in revenue and profits for the current quarter, forecasting $5.75 billion to $6.25 billion in revenue, as well as $1.05 in adjusted EPS, plus or minus a range of $0.10.

That would mark the second straight quarter of revenue and earnings growth, and it could signal the memory up-cycle is under way. The last "upcycle" for Micron began in the fourth quarter of fiscal 2016. After that, Micron's earnings per share increased for the next nine consecutive quarters. Therefore, it's not unthinkable that the profit growth is just starting for Micron.

Will COVID-19 short-circuit the memory upswing?

Of course, the bottom of the memory cycle is also coinciding with the the coronavirus pandemic. Analysts are very unsure as to whether a COVID-19 recession will impact memory demand to a degree that memory prices will fall again. Their estimates for the coming year are in a very wide range, from $2.50 per share to $10.20 per share.

However, all of the big memory players have greatly cut back on their capital expenditures for the last year and a half. For its part, Micron's spending on semiconductor manufacturing equipment -- the portion of capital expenditures that makes more chips -- will be down 40% this fiscal year compared to last year.

In other words, the problem of industry players ramping up lots of supply doesn't appear to be in the cards. And with the onset of coronavirus causing an admitted lack of clarity, it's hard to see the major memory players cranking up supply as the economy heads into a recession. So, the oversupply problem doesn't seem to be present today.

In addition, it's possible that demand may hold up better than some expect. With the virus still out there, it seems many work-from-home, tele-medicine, and remote education trends could remain. That's likely to help demand from the data center segment, where management is seeing strong demand.

Micron also saw sequential bit growth in mobile, even though the smartphone market was down significantly last quarter. That's because the 5G phone cycle, which is just beginning, is driving a big increase in DRAM and NAND bits per phone. On the conference call with analysts, CEO Sanjay Mehrotra said that the even low-to-mid range phones priced as low as sub-$250 will be transitioning to 5G, which is the largest part of the market. These phones will have about double the DRAM and NAND content of their 4G predecessors. Therefore, even if smartphone units decline, DRAM and NAND content could still go up overall.

Finally, there are also new Xbox and PlayStation game consoles coming out this year, which should also be a boon for the graphics DRAM and NAND markets.

What does this mean for the stock?

Despite COVID-19, it does appear that memory is on the upswing. Altering supply and demand takes time, and the momentum for this cycle is still just getting started. Throw in work-from-home trends and 5G, and Micron seems set for positive earnings momentum in the year ahead. Trading at just 1.5 times book value and about 10 times next year's average earnings estimates, and Micron still looks like a rare cheap stock in the technology sector.