Shares of electric-truck start-up Nikola (NASDAQ:NKLA) were trading lower on Thursday, as questions swirled about the company's upcoming Badger electric pickup truck amid a barrage of tweets from its founder.

As of 1:30 p.m. EDT, Nikola's shares were down about 8% from Wednesday's closing price.

Nikola said on Monday that it has begun taking preorders for its Badger pickup truck, an electric dynamo that appears to exist only in prototype form as of right now.

While the company has announced some impressive specifications for the truck -- 906 horsepower, up to 600 miles of range, available with or without a hydrogen fuel cell range extender -- we don't yet have all the details. The company has said deliveries will start in 2022, the vehicle will cost $60,000 to $90,000, and that "manufacturing [is] expected to go through OEM partnership; to be announced before" early December. 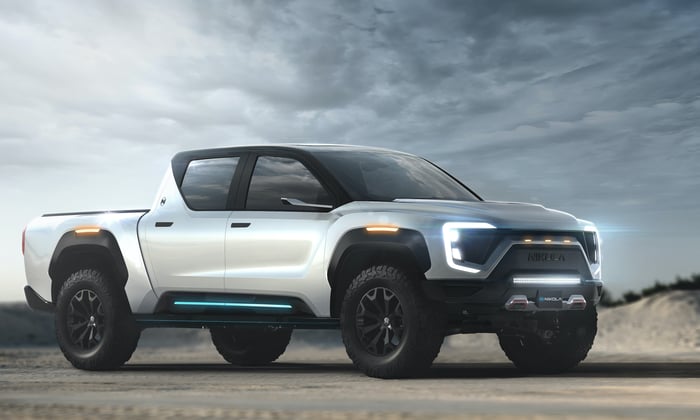 There have been some interesting tidbits from founder and Chairman Trevor Milton, including this on Thursday:

I love news like this! Through the future announced OEM partnership, higher order qty's and their supply chain, #nikolabadger pricing has improved more than expected. They know how to purchase parts. We will pass savings on to all existing and future

Which big automaker -- "OEM," for "original equipment manufacturer," is the industry's term for an automaker -- is he talking about? Is there a signed deal in place?

We don't know, and I think investors are getting a little tired of the hint game.

Nikola has promised that more details on the Badger will be forthcoming at Nikola World 2020, scheduled to be held in Phoenix in early December.

But it'll have to answer to auto investors well before then -- sometime in the next few weeks, when it makes its first quarterly earnings report as a public company.

Editor's note: This article has been corrected to note that the company has said deliveries are expected to start in 2022 and that the cost is expected to be $60,000 to $90,000.