Spotify shares doubled in a few months. Is this company's stock next?

The key to finding a stock that offers explosive potential gains is finding a company that has an enormous growth opportunity ahead and a highly profitable future. It can potentially help if it is highly doubted among the investment community. Up until the last couple months, audio streaming giant Spotify (SPOT 2.00%) fit this description perfectly.

Despite Spotify's leading market position, rapid growth, and huge addressable market, the investment community largely doubted the company's prospects, primarily because of its reliance on major music labels and its highly variable cost structure due to music royalty payments.

But Spotify was investing heavily in podcasting, which is intended to provide it with substantial advertising revenue. Since podcasting content is a fixed cost, much like producing Stranger Things is a fixed cost for Netflix, the incremental ad impressions Spotify sells are extremely profitable. With Spotify acquiring Bill Simmons' The Ringer, and reaching exclusive podcast deals with Joe Rogan's Joe Rogan Experience podcast, Kim Kardashian, and AT&T's DC Comics universe, investors are beginning to realize Spotify is likely to be far more profitable than previously thought. 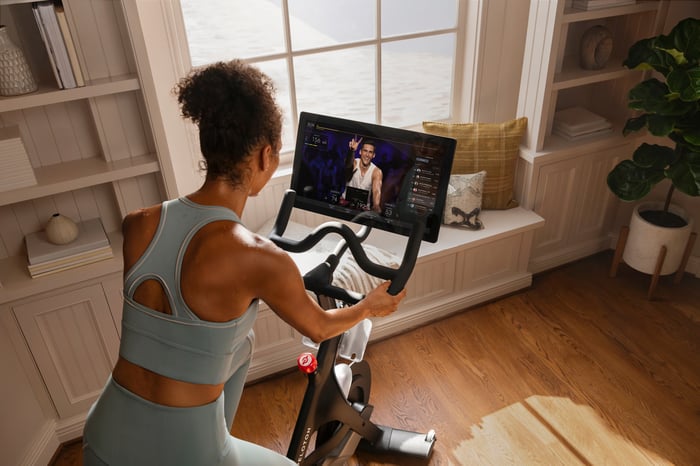 That's how a well-followed, large-cap stock like Spotify can more than double in just a few months, in the middle of a global pandemic, no less. The stock was trading as low as $118 in March and now changes hands at over $270 per share.

A very similar situation is taking shape with Peloton Interactive (PTON -0.19%), and its stock could also have an explosive move higher. Peloton is the market leader in the emerging connected fitness category, with a very popular product and a huge long-term growth opportunity.

One way to consider the market potential is by focusing on the 183 million gym memberships globally, including 90 million in the company's current markets -- the U.S., U.K., Canada, and Germany. With only about 1 million Connected Fitness subscribers today, and a strategy to roll out mass market versions of its relatively expensive bike and treadmill, it's easy to see how the number of subscribers could grow by 10-fold, 20-fold, or 30-fold, given sufficient time.

That couldn't be said for just any fitness product. Peloton is different. The company benefits from an almost cult-like community of Peloton enthusiasts who spread the word. The company's Net Promoter Score (NPS) uses a -100 to 100 scale to measure how likely customers are to recommend a product to their peers. Anything above zero is considered good, above 50 is excellent, and above 70 is world-class. The bike ranges from 80 to 93.

Peloton is replicating the same high satisfaction with its newer treadmill, which has an NPS "approaching 80." It would be fair to expect a similar reaction to the company's rower, when that product is released. The company's subscribers clearly seem to love the product and the experience.

The real beauty of the business is the company's profit margin potential at greater scale. Peloton only needs to produce a fixed amount of fitness content, regardless of its subscriber base size. For example, if Robin Arzon, one of Peloton's most popular instructors, records five classes per week, that would be enough Robin Arzon content for the Peloton subscriber base, whether it includes 1 million Connected Fitness subscribers, or 10 million, or 50 million. That's why subscription gross profit margins are already approaching 60% and should surpass 70% over time.

But investors still appear skeptical. The fitness industry is notorious for rolling out initially popular but faddish products that collect dust and eventually disappear from the marketplace. Some investors expect the same thing to happen with Peloton. It has even been compared to the camera maker GoPro, which lacks any meaningful competitive advantage and has seen its stock price decline 80% since its 2014 initial public offering.

How Peloton is different

But Peloton has meaningful competitive advantages that GoPro never had, and hardware isn't one of them. Peloton certainly makes an extremely high quality spin bike and treadmill, but the company's core competitive advantages are a relatively large research and development budget, made possible by the company's success to date, and the network effect of the community.

If several of your friends love their Pelotons and suggest you ride alongside them, and you're considering getting a connected fitness bike, you're going to strongly consider buying a Peloton first. The low quality knockoffs that lack the same world-class instructors and seamless integration between hardware, software, and technology are unlikely to interest you.

The big benefit that Peloton is seeing today is, of course, surging demand for its at-home fitness experience due to the coronavirus pandemic. The company has doubled production of its bikes since early March and still hasn't been able to keep up with demand, as evidenced by its current 6 to 8 week order-to-delivery times. But management expects to catch up later this summer as new manufacturer capacity ramps up.

Given that demand for Peloton is outstripping supply at the moment, advertising could be a counterproductive waste of resources. As a result, Peloton is on track to eliminate essentially all of its media spending. CFO Jill Woodworth said that it is likely to cut sales and marketing spending by half in the fiscal fourth quarter ending June. To boot, the surging awareness and demand levels appear likely to allow the company to permanently reduce those expenses as free word-of-mouth marketing takes on a life of its own. That should make the company much more profitable going forward.

At some point, the investment community will realize that Peloton is not a fad, and fully understand how big and profitable it should be over time. When that happens, investors may see the stock have "Spotify-like" explosive gains.

Was I Wrong? This Hot Stock Has Already Doubled in 2023