There could be a lot of pent-up demand for this fresh take on the classic "Star Wars" flight combat games from the 1990s.

Electronic Arts (EA -0.84%) is mostly known for its sports titles, Madden and FIFA, and shooters like Battlefield and Apex Legends, but it also has a deep catalog of Star Wars games that includes content licensed from Disney's Lucasfilm. Gamers will get a taste of that soon as EA recently unveiled Star Wars: Squadrons, developed by EA Motive, the same studio that made Star Wars: Battlefront 2.

Other than new releases from sports franchises, EA doesn't have anything else on the 2020 slate. Squadrons is a flight combat game, so it's not going to get the same hype as a new first-person shooter, one of the most widely played genres in the gaming industry, but there are four reasons why Star Wars: Squadrons could be a surprise hit when it launches Oct. 2. 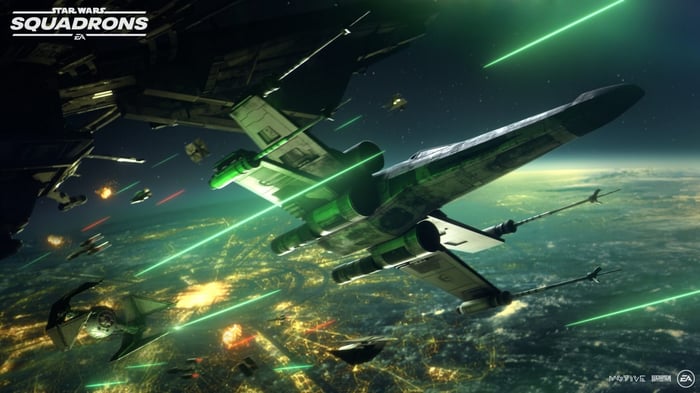 1. The Star Wars brand can sell

Battlefront 2 got off to a rough start and didn't sell well out of the gate in 2017 due to the game's microtransaction controversy, but the game has made a strong comeback over the last few years after EA made drastic changes and added loads of new content.

It's been a long time since players have experienced a new flight combat game in the Star Wars universe. TIE Fighter (1994) is particularly memorable. Obviously, news of a new Star Wars flight simulation game is going to immediately draw comparisons to classics like TIE Fighter and Star Wars: Rogue Squadron (1998).

Good memories of classic air combat titles, along with the new graphics capabilities of current gaming PCs and consoles, could create enough curiosity to drive higher sales of Squadrons this fall.

Battlefront 2 was received poorly at release because it included a "pay-to-win" mechanic that many players didn't like. Those willing to spend the most money got an edge over everyone else. EA is steering clear of that mess with Squadrons. Players should have higher interest knowing that there are no microtransactions in the game. Squadrons will retail for $40 on PS4, Xbox One, and PC. All bonus content can be unlocked for free once enough time is spent playing the game. When players hand over $40, they get the whole game.

The $40 retail price is much lower than the standard price of $60 for new releases. The lower price likely reflects a lower investment by EA to make the game. The game's primary focus on multiplayer content, as opposed to a long, single-player story line, likely led to lower investment and the lower price.

A lower price point should lead to higher demand. It will be crucial, however, for the game to get good reviews when it releases, and sometimes new releases can be reviewed poorly if there are unforeseen bugs with the gameplay.

Overall, I believe the lower price, lack of microtransactions, and a return to the glory days of Star Wars flight-simulation video games could lead to a lot of pent-up demand for this title. It likely won't outsell a big-budget title like Star Wars: Fallen Order, but who knows. Much of the coverage of Star Wars: Squadrons on game review sites has been very positive, so things are looking good.