Despite production setbacks earlier this year as the electric car maker's factories temporarily closed due to the pandemic, it's back on track to meet its original goal for the year.

Tesla (TSLA 0.08%) impressed investors on Thursday, reporting second-quarter vehicle deliveries that were far ahead of analysts' estimates. The feat was particularly notable since the company's main factory in Fremont, California, was shut down for the first half of the quarter.

While the delivery numbers bode well for the company's second-quarter financial results, which Tesla likely won't release until late this month, the update also suggests the automaker has a shot at hitting its pre-pandemic full-year target of more than 500,000 deliveries in 2020 after all. 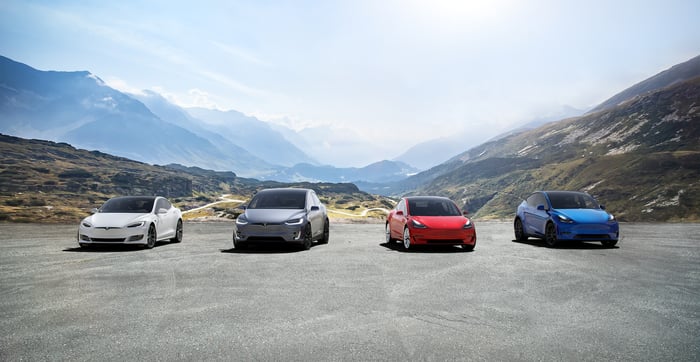 On Thursday morning, Tesla said it delivered about 90,650 vehicles in Q2, crushing analysts' average estimate for 72,000 deliveries. Also impressively, that exceeded the 88,496 units the electric-car maker delivered to customers in Q1.

Of course, Tesla's vehicle production took a hit as coronavirus-necessitated lockdowns led to the company shut down its factory in California during the first half of the quarter. Tesla said it produced 82,272 vehicles during Q2, down sharply from 102,672 units in Q1. More importantly, management noted in its production and deliveries update on Thursday that it had successfully ramped production back to levels from before the coronavirus.

Total Model S and X deliveries during Q2 were approximately 10,600, Tesla said. Deliveries of its lower-cost Model 3 and Model Y vehicles came in at about 80,050.

With just 193,322 vehicles delivered during the first half of 2020, a target of 500,000 total deliveries during the year may sound out of reach at first glance. But investors should keep in mind two significant catalysts for Tesla during the year.

First, Tesla started production at a new factory in China to build Model 3 vehicles for that important market late last year. In Tesla's first-quarter update, the company said it believed the factory would achieve an annualized production run rate at the factory of 200,000 vehicles by mid-2020 -- an achievement that would provide a substantial lift to deliveries in the second half of the year.

Second, the automaker launched its Model Y crossover ahead of schedule earlier this year -- and production is going very well, management explained in its first-quarter shareholder letter.

With the added tailwinds of high-volume Model 3 production in China and the launch of Model Y, the goal of 500,000-plus deliveries in 2020 looks within reach for Tesla. Highlighting the significant growth this implies, this would be up from about 388,000 deliveries in 2019.