Insurance companies are being tested right now, but this one looks strong.

Founded in 1930 and publicly traded since 1986, Markel (MKL 0.70%) has long been a solid, steady player in the specialty insurance market. Providing solutions for small businesses, real estate developers, farmers, and just about any other niche enterprise, Markel serves many distinct and specialized needs. With a well-earned reputation for providing customized exotic insurance solutions, Markel has served customers -- and shareholders -- well over the years.

A year like 2020 usually signals choppy waters for insurers. And while investors may decide to avoid the sector altogether, here's why Markel might be an outlier. 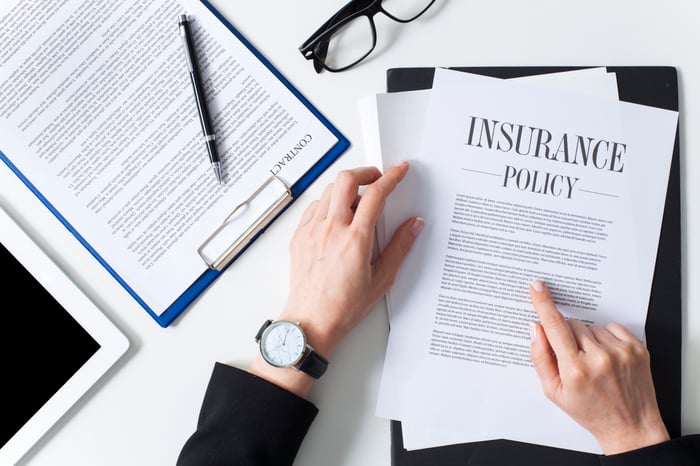 Fundamentally, insurers make money by covering as many customers as they can against unexpected losses -- and paying out less in claims than they receive in premiums. The key metric in the industry is the combined ratio (incurred losses plus operational expenses divided by total premium revenue). A combined ratio of over 100% means the company is losing money on core operations, while less than 100% indicates profitable unit economics.

But profitable risk management is just part of the business; how an insurer invests that extra capital is key to its performance. Markel is an active and aggressive investor of capital, as shown by an investment portfolio that topped $22 billion in 2019 on returns of 14.6% -- the company's best showing in more than two decades.

The first quarter of 2020 hit everyone's portfolio hard, and Markel wasn't spared. Markel wrote down $1.7 billion of its equity portfolio to go along with an additional $325 million of "pandemic-related losses," helping investors further break down the company's EBITDA (earnings before interest, taxes, depreciation, and amortization) by including additional coronavirus adjustments. So, while Markel's $1.7 billion writedown looked bad on paper, it can be almost entirely attributed to the company's "level 1" security holdings (i.e., publicly traded equities).

But times were different when the books closed on March 31. The pandemic was still on the upswing as states were just starting their mandated shutdowns. With the equity markets up from their pandemic lows, Markel's portfolio has likely participated in the upswing.

COVID-19 had an effect on every business with exposure to Main Street or the markets. Markel has both. Despite this hit, Markel still outperformed its numbers from the first quarter of 2019, with $907 million in net cash from investing activities in this year's period compared to $342 million in last year's. While this is more of a choice by management to preserve cash with so much uncertainty ahead, the move shows the resiliency of Markel's balance sheet.

And with no unsecured senior debt obligations maturing in the next 24 months and an increasing cash balance ($3.8 billion on March 31 compared to $3 billion on Dec. 31), Markel has room to breathe.

Despite being tied to publicly traded equity markets just like any other insurer, Markel has one trump card in its portfolio that gives it a leg up on the competition: Markel Ventures. Acting like an internal private equity vehicle, Markel Ventures acquires majority and minority stakes in privately owned businesses that are profitable and add real value to the Markel balance sheet.

A look at Markel Ventures' holdings shows a portfolio resembling many middle-market private equity groups. The businesses aren't sexy, but they are solidly profitable -- like ParkLand Ventures, an operator of manufactured housing communities (trailer parks), or the Tromp Group, a manufacturer of baking equipment.

Markel operates its Ventures arm in "cash money" terms -- as of December 2019, it had deployed $1.9 billion in capital and returned $264 million, building cash reserves in Ventures businesses of $900 million in total.

Even as the equity markets crashed, Markel Ventures posted record numbers in the first quarter: $511 million in revenue, compared to $455 million in Q1 2019, and $67 million in EBITDA compared to $55 million in 2019. The business also acquired VSC Fire & Safety, a provider of fire protection, life safety, and low-voltage solutions to private businesses and municipalities throughout the southeastern United States.

Markel looks good even when times are bad

Markel's equity portfolio should see a big bounceback, as the market has returned close to pre-COVID highs. It may also see this position of strength as an opportunity to get acquisitive, either looking at other insurers to build scale or through Ventures.

While Markel reported a combined ratio of 118% in the first quarter of 2020, it attributed 24 percentage points to the pandemic. Insurers' core business may be in for a rocky road in the short term, but Markel investors can draw on a long track record of disciplined success as the company looks toward the future.