Proclaiming itself as the "gold investment that works," Franco-Nevada (NYSE:FNV) proved that its branding was well warranted over the past six months. While the S&P 500 has ticked down 4% in the first half of the year, shares of Franco-Nevada have climbed 35%, according to data from S&P Global Market Intelligence. In addition to the rise in the price of gold, the company's strong first-quarter earnings report and dedication to its dividend have inspired investors to pick up shares.

Unlike mining companies that dig the yellow stuff out of the ground, Franco-Nevada operates more like a specialized financier. The company provides up-front capital to the mining companies, and in return, it obtains the right to purchase a certain amount of gold (or other metal) at a previously determined discounted price, or to receive a percentage of mineral production from a mine. 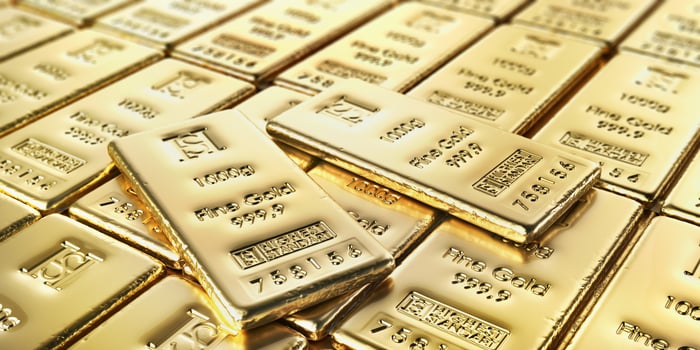 While the company's portfolio includes silver, platinum group metals, and oil and gas assets, it's gold that figures most prominently, representing 65% of revenue and 63% of adjusted EBITDA in 2019. It's no wonder, therefore, that investors turned to the stock as the price of gold climbed 15.4% during the first six months of the year.

Another factor that encouraged investors was the company's Q1 report. Reporting revenue of $240.5 million, Franco-Nevada recognized a year-over-year increase of 34% on the top line. The bottom line also glittered brightly in investors' eyes as the company reported adjusted EBITDA of $192.7 million, a 37% increase over the same period in 2019. And it wasn't only the income statement that investors found alluring; Franco-Nevada also shined in terms of cash flow, reporting operating cash flow of $195.2 million -- 36% higher than its $143.6 million from Q1 2019.

Lastly, Franco-Nevada distinguished itself among investors in terms of its commitment to its dividend. While the COVID-19 outbreak forced many companies to cut or suspend their quarterly dividends, Franco-Nevada continued to reward shareholders. In May, management announced that the company would be raising the quarterly dividend to $0.26 per share, a 4% increase over the previous amount.

Although Franco-Nevada has withdrawn 2020 guidance because of the uncertainty stemming from the global pandemic, the company's debt-free balance sheet suggests that it's well-suited to withstand the near-term headwinds. In fact, for those looking to increase their exposure to gold, Franco-Nevada represents one of the best investment opportunities at the moment.