Please ensure Javascript is enabled for purposes of website accessibility
Log In Help Join The Motley Fool
Free Article Join Over 1 Million Premium Members And Get More In-Depth Stock Guidance and Research
By Will Healy - Updated Jul 8, 2020 at 12:17PM

Investors face serious risks in trying to profit from these growth stories.

Many of the most sought-after stocks on the market come from the tech sector. Over the last few decades, the tech industry has remained on the cutting edge, bringing new and innovative technologies to society. This has generated heavy demand in the market for some tech stocks.

Consequently, some tech names have risen to absurd valuations. While these companies may prosper for years to come, their stock prices have increased to levels that could make earning long-term gains more difficult. In this respect, investors need to weigh the valuations of companies such as Bill.com Holdings (BILL 4.70%), Datadog, Inc. (DDOG 0.82%), and Shopify, Inc. (SHOP 0.84%) carefully before taking a chance on such stocks.

Bill.com is a software-as-a-service (SaaS) company that provides back-office financial services to small and medium-sized businesses (SMBs). It streamlines and automates billing and payment processes that most SMBs still perform manually. This work happens through Intuit's QuickBooks Online and other popular software packages that integrate with Bill.com's Simple Bill Pay. 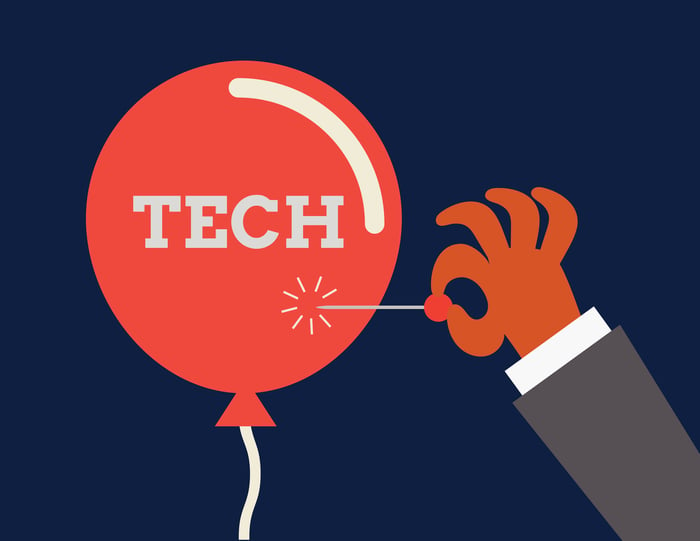 SMBs continue to increasingly embrace this service. In the most recent quarter, quarterly revenue growth increased by 46% year over year. Subscriptions and transactions revenue rose by 63% over the same period.

Investors have taken notice. The stock's initial run-up following its December IPO came down amid the stock market swoon related to COVID-19. However, Bill.com moved higher as tech stocks bounced back, and it has almost quadrupled in value since the March lows. 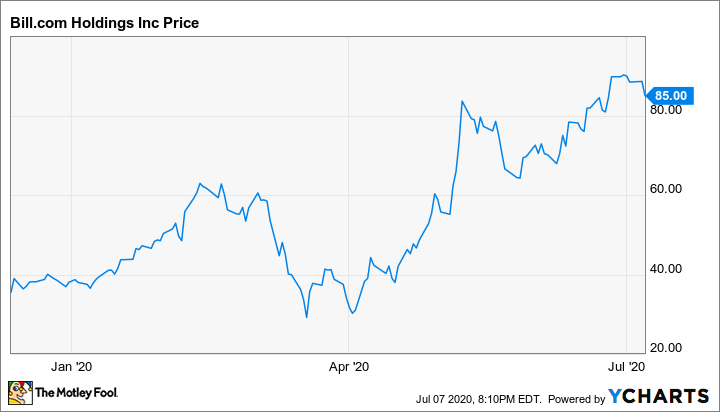 Nonetheless, this could indicate the stock price has moved ahead of growth. With losses projected for the foreseeable future, Bill.com does not have a P/E ratio for now. Still, it trades at a price-to-sales (P/S) ratio of over 52.

In comparison, Square, a high-growth company offering a wider array of financial services, trades at a sales multiple of 10.9. While Bill.com should continue to offer value to businesses, the stock could struggle to compete with Square or other fintech stocks.

Datadog monitors cloud platforms on a high-level basis. It oversees the entire data stack, including the parts that come from third-party vendors. This allows IT departments to isolate potential issues. It also prevents and minimizes downtimes, helping to provide a smoother user experience.

This value proposition helped send revenue higher in the previous quarter by 87% from year-ago levels and resulted in a quarterly profit of $0.02 per diluted share for that period. The company also reported a positive free cash flow of $19.31 million.

However, this story has begun to capture more investor attention. Datadog stock began trading last September. It saw little upward movement in the stock price until right after tech stocks began their recovery in March. Since that time, it has more than tripled in value. 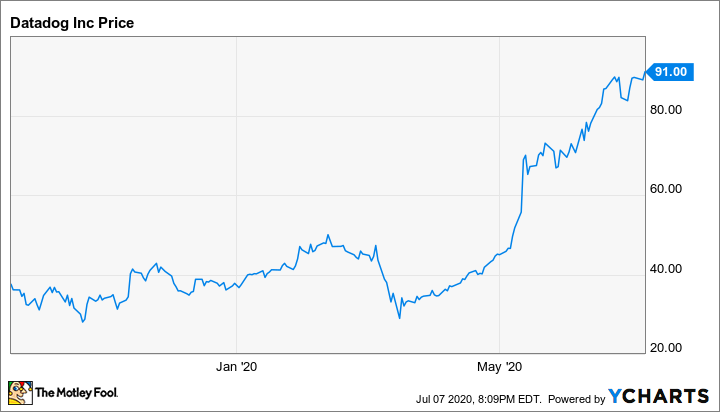 Analysts project positive annual earnings this year, and consensus estimates place those at $0.05 per share. However, the P/S ratio is just under 63. While that does not necessarily imply that the stock has finished rising, investors can buy a competitor such as Splunk for around 12.9 times sales. Such a disparity increases the odds that current buyers become bag holders if the stock's fortune turns.

Shopify stock is another SaaS company that has appeared unstoppable over the last few months. The stock price continues to rise as more SMBs adopt the Shopify platform.

Even amid the COVID-19 pandemic, the growth has accelerated. As in-person shopping options became limited, many retailers had to emphasize online shopping, thus boosting Shopify. In the first quarter, revenue rose by 47% year over year, while subscription solutions saw a revenue increase of 34% over the same period. The company earned $0.19 per share on an adjusted basis.

This has helped to contribute to the recent surge in the stock price. It has risen by approximately 375% from its March low. 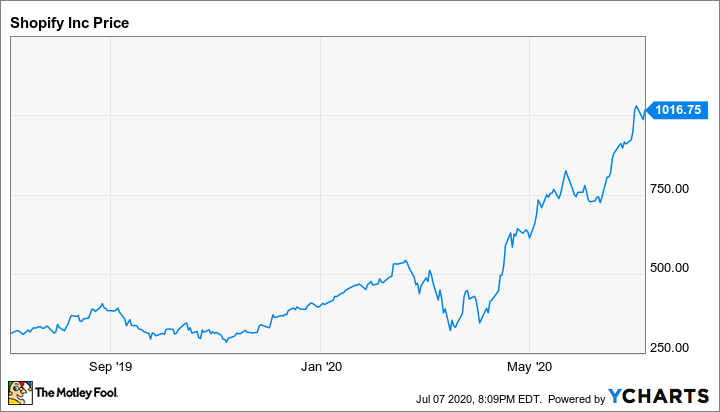 However, this had led to questions regarding its valuation. Shopify stock sells for just over 65 times sales. Furthermore, profit projections could keep the P/E ratio above 1,000 for years to come. Even if a projection of 73.3% earnings growth for 2020 holds, it may not justify such lofty valuations.

Additionally, despite Shopify's popularity, it is far from the only available e-commerce platform. Many businesses also choose to go with WooCommerce. WooCommerce is an open-source platform that is Shopify's largest competitor, according to dropshipping company Oberlo. Adobe's Magento platform is another available option. Adobe is not a pure e-commerce play like Shopify. Still, at 18.3 times sales, it is a significantly more affordable option.

Shopify has long defied analyst predictions of a downturn. Forecasting if and how much Shopify will continue to rise has proven difficult. However, given its current valuation, Shopify stock could face a years-long recovery process should it fall out of favor.