Shares of wireless service provider T-Mobile US (NASDAQ:TMUS) rose 32.8% during the first half of 2020, according to data from S&P Global Market Intelligence. T-Mobile has been an outperformer among U.S. wireless telecom stocks for a while now, and the first half of 2020 was no different, with the company reporting solid Q1 earnings and then pre-announcing better-than-expected net additions for the June quarter.

But what really propelled T-Mobile's stock higher was the closing of its merger with competitor Sprint. Two years in the making, the merger is expected to yield significant cost synergies while also forming a best-in-class 5G spectrum portfolio. 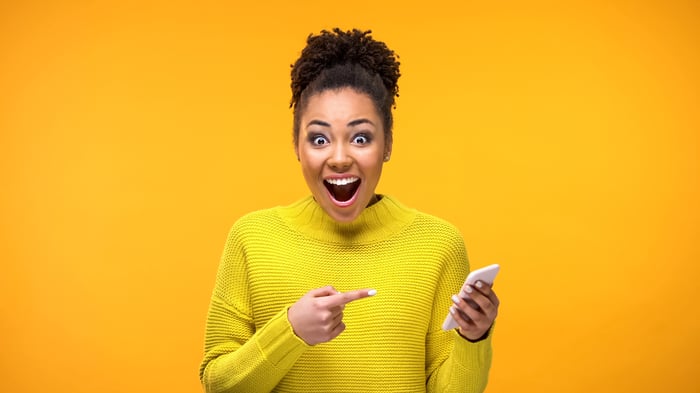 T-Mobile's stock had actually surged prior to the outbreak of COVID-19, when final approval for the Sprint merger was granted by a U.S. district judge on Feb. 11. Like all stocks, T-Mobile saw those gains erased by the outbreak of COVID-19 in the U.S. in March, but shares eventually rallied to exceed their March highs as the market recovered and the company reported solid growth numbers.

Sprint will bring with it valuable 2.5 GHz spectrum, which T-Mobile will combine with its low-band 600 MHz and millimeter-wave spectrum to create a "layer cake" 5G network that can deliver top speeds in any geography or environment. According to management, when combining low- and mid-band 5G spectrum of the merged company, T-Mobile now has double that of AT&T (NYSE:T) and triple that of Verizon Communications (NYSE:VZ), and it has more high-speed millimeter-wave spectrum than AT&T (though not Verizon).

Armed with this spectrum, T-Mobile has a chance to go from a lagging network to a leading network as the industry transitions to 5G.

Meanwhile, T-Mobile's customer-friendly "Un-carrier" mantra continues to win market share even in the late 4G era. In June, the company pre-announced 800,000 to 900,000 postpaid net additions for the second quarter, well above guidance of zero to 150,000 given a few months ago.

T-Mobile looks to be in a good position to take market share in wireless telecom in the 5G era. While wireless is not the most exciting industry, it is quite shielded from the effects of COVID-19.

That means T-Mobile should be just fine, even after its recent run. And if it can execute on delivering a best-in-class 5G network with its bountiful spectrum portfolio, its gains may only just be getting started.

Why Shares of T-Mobile Rose 32.8% in the First Half of 2020 @themotleyfool #stocks $TMUS $VZ $T Next Article
Current