The 5G supercycle is upon us. Here are the three best ways to play it heading into summer.

5G is the new wireless standard that promises lightning-fast, low-latency wireless communications that will usher in a new era of futuristic technology applications. While 4G brought with it the "app" era in smartphones, 5G is set to usher in a new era of futuristic technologies such as the Internet of Things, self-driving cars, augmented and virtual reality, along with other applications we can't even contemplate today.

5G has even become a central geopolitical issue, with the U.S. and China racing to build out their 5G infrastructures to stimulate growth and get ahead in next-generation technology. As such, 5G is a very hot topic. And yet, there are still quite a few high-quality 5G-related stocks trading at reasonable prices today.

Three of the best-positioned 5G stocks that still trade at attractive valuations include wireless carrier T-Mobile (TMUS 0.72%), leading chip manufacturer Taiwan Semiconductor Manufacturing (TSM 2.96%), and memory chip giant Micron Technology (MU 3.58%), all of which look like solid 5G plays to add to your portfolio this summer. 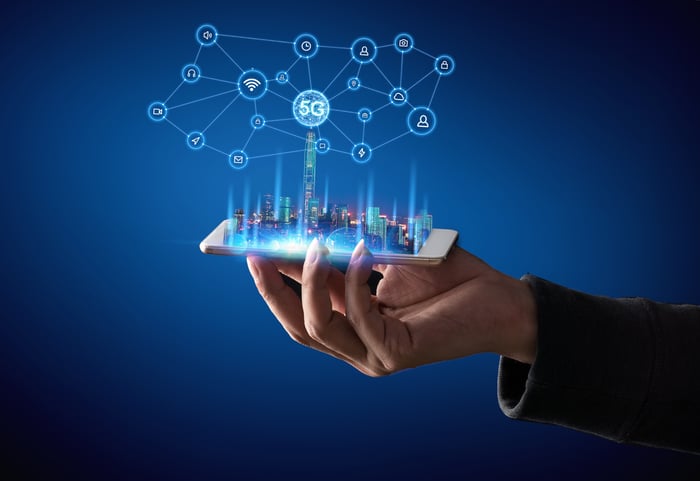 T-Mobile: The best network at the lowest price?

If a company offered you a superior product at a lower price, could anything make you go with a competitor? Probably not, which is why T-Mobile looks so compelling today.

For years, T-Mobile was the network laggard behind wireless giants AT&T (T -1.69%) and Verizon (VZ -1.77%), but it was still a winning stock.  Establishing itself as the insurgent "Un-carrier," T-Mobile campaigned on lower prices and customer-friendly features such as unlimited data, doing away with all hidden fees and taxes, and free Netflix (NFLX 0.41%) on certain plans. That ethos allowed T-Mobile to take market share and bring its churn down to industry-leading levels.

However, the real upside for T-Mobile today comes from its recently closed merger with Sprint. While Sprint has been an industry laggard, it also brought with it valuable 2.5 GHz spectrum, on which T-Mobile is building its 5G network. In fact, the combined company now has a superior 5G spectrum portfolio to Verizon and AT&T, which it began deploying last December.

Although Verizon still holds the speed crown in the 5G race, it has very little coverage. Meanwhile, according to the latest report from Opensignal, T-Mobile wins the crown for 5G availability by a huge amount. That study confirmed earlier findings by Rootmetrics, which found T-Mobile had the highest maximum 5G availability, at 57.1% in Washington, D.C. Sprint, now part of T-Mobile, came in second, at 45.7% availability in Dallas. Competitor AT&T's maximum 5G availability was only 9.5% in Indianapolis, and Verizon's high-speed 5G was only available 3.1% of the time in the Chicago market.

Meanwhile, T-Mobile continues to rack up net additions. In early June, the company pre-announced 800,000 to 900,000 net adds in the June quarter, up from prior guidance of 0 to 150,000. Management noted a better-than-expected recovery from coronavirus, as well as better performance in its enterprise offerings, where it has very little market share.

T-Mobile's superior network and "Un-carrier" mantra should allow it to take significant market share in the 5G era, making the stock a smart buy today.

Taiwan Semiconductor has the manufacturing lead

To achieve all of the benefits of 5G, many different technologies will have to work together. There are modems within 5G phones, which might be made by Qualcomm (QCOM 2.78%), which must communicate with 5G radios that might contain accelerator systems-on-chips made by Xilinx (XLNX). These radios might then connect back either to either an edge or cloud data center, which are filled with high-powered graphics processing units (GPUs) from Nvidia (NVDA 5.14%) or central processing units (CPUs) designed by Advanced Micro Devices (AMD 2.67%).

But my next 5G buy isn't any of these stocks. Rather, the next pick is the foundry all of these chipmakers depend on for their manufacturing: Taiwan Semiconductor Manufacturing.

Taiwan Semi doesn't make its own chips but rather solely manufactures them for outside chips designers. This "pure" foundry model has its benefits. Taiwan Semi's clients can focus on design and not have to worry about expensive and difficult manufacturing processes. Meanwhile, by serving a diverse array of chipmakers, Taiwan Semi compounds its manufacturing expertise. That has paid off in the last few years, as Taiwan Semi leapt ahead of competitors as the first foundry to produce a 7nm chip. And TSM isn't slowing down; it's already beginning to ramp up its 5nm process as we speak (in the semiconductor world, smaller nanometers signals a denser, more powerful chip).

Another reason to love Taiwan Semi over individual chipmakers is that no matter which chip company wins the 5G race, it's likely Taiwan Semi will produce the winning chip. As an example, TSM said that even if U.S. export controls make TSM unable to produce chips for large customer Huawei, TSM wouldn't have any trouble replacing that demand. And that's no small feat -- Huawei's HiSilicon division makes up about 20% of TSM's orders.

Taiwan Semi has become so strategically important that the U.S. government is even paying the manufacturing giant to build new manufacturing plants in Arizona. These government subsidies will help keep Taiwan Semi's costs at the level of its Taiwan operations, and enable it grow capacity for U.S. customers in the 5G era.

Even in spite of COVID-19 headwinds, TSM management recently forecast revenue growth in the mid-to-high teens this year, as demand for its 5G expertise overwhelmed concerns of a pandemic-induced slowdown. Trading at just 22 times this year's earnings estimates, 19.3 times next year's earnings estimates, and paying out a hefty 2.9% dividend, Taiwan Semi looks like a rock-solid 5G play for yield-hungry investors this July.

Micron Technology has all the chips

Finally, all 5G phones will need much more DRAM and NAND flash memory in them, in order for users to reap the rewards of 5G speeds and next-gen applications. That should benefit Micron Technology, which produces both products. In fact, Micron is one of only three companies that make over 90% of the world's DRAM, and one of only six major companies that makes NAND flash, aside form sub-scale Chinese upstarts.

Micron just reported impressive recent quarterly results, as data centers, gaming, and especially 5G phones were able to support demand even in the face of the COVID-19 recession. Micron was even able to grow mobile bit shipments as the smartphone industry struggled. That's because 5G phones, even on the lower-end, are coming to market, and they're packed with about double the amount of DRAM and NAND content as 4G phones.

Meanwhile, Micron guided for sequential growth in revenue and profits for the current quarter, meaning the memory-maker may be on the verge of an industry up-cycle. The last time that happened, this cyclical business increased profits for nine straight quarters. Trading at just 1.5 times book value and 10 times 2021 earnings estimates, Micron remains one of the cheapest 5G stocks out there today.