The last decade has been incredibly disruptive to the status quo, and there could be plenty more in the next 10 years. Changes in consumer preferences and ideals have intersected with technology and are uprooting incumbent businesses, replacing them with newer ones better aligned with today's reality.

While disruption often revolves around tech, consumer goods shouldn't be left out of the conversation. Two fast-growing names that need little introduction -- Beyond Meat (NASDAQ:BYND) and Monster Beverage (NASDAQ:MNST) -- both became well-known in short periods of time. With a new decade now here, there is plenty of promising growth potential ahead for both stocks, although the two companies are in two very different chapters in their respective stories.

A well-established disruptor of the beverage industry

Monster Beverage is a case study in successful business transformation. Known as Hansen's Natural prior to changing its name in 2012 to better reflect its future as an energy drink leader, the company also signed a global distribution deal with Coca-Cola (NYSE:KO) a couple of years later. The results have been stunning. Since the start of 2010, revenue has doubled nearly three times over, and the stock has been one of the biggest winners around with a more than 1,000% return.

In spite of the results, this remains a growth story. Monster may be nearly a household name in the U.S., but thanks to being plugged into Coke's distribution channels, it has plenty of the globe left to conquer. Sales did drop some 22% year over year during the worst of the coronavirus lockdown as some retailers were closed, but those effects are likely to reverse course. During the first quarter of 2020, sales grew 12%, building on the 10% increase notched in 2019.

But what of the new workout beverage industry, led by privately held Bang Energy Drinks? Perhaps this is the start of a new disruptive movement similar to the one that put Monster on a fast track at the expense of incumbent Red Bull. Only time will tell. But Monster still being in growth mode itself in international markets helps, and it too has a presence in the workout scene with its Reign Total Body Fuel beverages. A nimble corporate structure also works in its favor. At the end of March 2020, Monster had zero debt and $935 million in cash and short-term investments on its books -- not bad at all for a consumer goods company.

As of this writing, shares trade for 36.5 times trailing 12-month free cash flow (revenue less cash operating and capital expenses) and 29.6 times one-year forward expected earnings. It's a high premium that bakes in a quick recovery from the effects of coronavirus, as well as plenty of growth in the next couple of years. Also in play is the company's share repurchase program. Monster bought back $579 million worth of its stock in Q1 2020, which propped up earnings per share during the period.

But with a lucrative operating margin of nearly 34% over the last year, the premium price tag exists for a reason. This is a top-notch leader in the beverage industry. 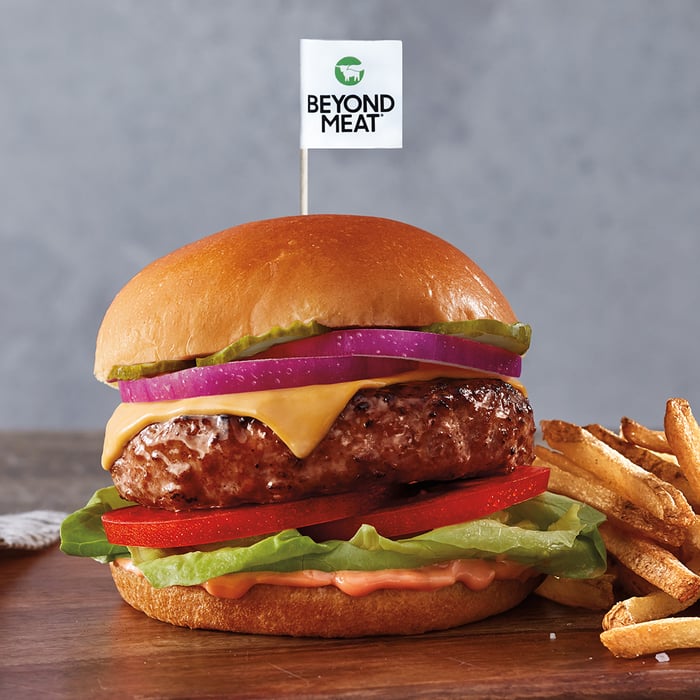 Product innovation built around a mission

Upstart food company Beyond Meat was founded just a little over ten years ago and exploded into mainstream consciousness with its IPO in May 2019. Shares went from an initial public debut price of about $46 to nearly $250 in a matter of months. Things have cooled off substantially since (shares are at $142 as of this writing), but Beyond Meat has proven that its protein grown from plants is more than a small niche offering for those with a vegan diet. The company's very mission is built around having a positive effect on climate change, health, sustainability, and animal welfare.

It remains to be seen just how big the market will be for plant-based meat, but current estimates put annual global sales at roughly $13 billion. That number is expected to double in the next five years, according to various researchers. Q1 2020 sales were $97.1 million -- a 141% increase over a year ago -- so there is plenty of room for the company to make further inroads in the massive global food industry.

As with all things food-related, though, there is ample competition. A year ago, when shares were still riding incredibly high, I cited entry from a slew of Beyond Meat's much larger peers as reason for caution. However, that hasn't slowed the company's advance. If anything, it's validation that it's onto something good. I expect growth trajectory to take a hit in the second quarter due to the economic lockdown, but it should be a temporary effect as Beyond Meat continues to develop in the U.S. and expand into new markets overseas.

At over 12 times expected one-year forward sales, Beyond Meat still trades for an incredibly high premium that factors for similar rates of growth for at least a few more years. And profitability is not the name of the game at this point. Free cash flow was negative $85.6 million over the last 12 months. Operating in the black will be a concern later on. However, total cash and equivalents were $246 million and debt $30.6 million at the end of March. That gives Beyond Meat enough flexibility to pursue its global aspirations, although I expect it will need to look for fresh cash within the next couple of years by issuing more stock (which dilutes existing shareholders) or debt (which lowers profit margins). But for those looking for an emerging high-octane brand with a mission, it's hard to ignore this stock.

I assume that readers are here because of interest in disruptive consumer goods brands. Thus, while I think Monster Beverage is a perfectly acceptable growth stock that has lots of runway left ahead of it, the company is now at a point where it is balancing expansion with profitability. The bottom line could propel share prices much higher in the next decade (gotta love those high operating margins), but based on that metric and the growth of Monster on the international scene, shares are priced a little high for my taste right now.

That's not to say Beyond Meat is a value. On the contrary, this is a rich stock, and as such I expect it to be a very wild ride in the years ahead. Any purchase should be kept small with the intent of adding more to the position over time (perhaps on a monthly or quarterly basis). But given the huge upside as plant-based protein gains traction with the masses, I think Beyond Meat will be the more rewarding long-term holding at this juncture.