Please ensure Javascript is enabled for purposes of website accessibility
Log In Help Join The Motley Fool
Free Article Join Over 1 Million Premium Members And Get More In-Depth Stock Guidance and Research
By Christine Williams – Jul 10, 2020 at 9:43AM

This niche platform is thriving as shopping habits move online.

Shopping online is hitting it big, and e-commerce platform Etsy (ETSY 4.85%) is finally positioned to take advantage of the wave. Prior to a massive restructuring in 2017, the company was falling deeper and deeper into the red, pressured by ballooning costs and big-name competitors like Amazon (AMZN 2.55%) and eBay (EBAY 1.11%). However, sweeping changes whirled through the company in the past three years. Put to the test by recent economic winds, Etsy is proving it truly does have what it takes to thrive -- at a price.

Indeed, FY20 Q1 results seem to have demonstrated that CEO Josh Silverman has made the right call: Etsy quickly climbed into positive territory after his appointment and has exhibited incredible resilience in the face of changing times.

Total revenue was $228.1 million for the first quarter, up 34.7% year over year. Gross profit was $145.6 million, up 24.8% year over year, while gross margin was 63.9%, down compared with 68.9% in the first quarter of 2019. Etsy explained this decrease in gross margin as a result of the company's recent acquisition of musical instrument marketplace Reverb, as well as its ad platform, Etsy Ads, which drives revenue growth but carries an equal offset in costs. 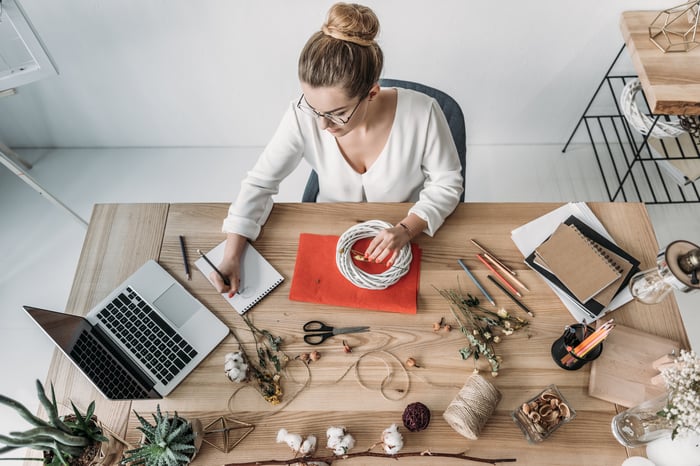 Revenue growth comes at a price

However, Etsy's great advantage comes from its emphasis on the human aspect of commerce, even in a digital environment, and its recent changes seem antithetical to its core values. Starting in 2017, Etsy underwent a cost-cutting spree, and the company transitioned its global marketplace to Google Cloud from physical data centers to enable greater scalability at a more affordable price. These moves helped return Etsy to profitability and positioned the company for future expansion. But then came the worrying news for merchants: huge revisions to fees and seller packages.

Transaction fees increased from 3.5% to 5% , and the unveiling of in-house ad platform Etsy Ads carried an obligatory inclusion that charges sellers 12%-15% for ad referrals on top of the regular transaction fees  This requirement has consolidated Etsy's role as an intermediary for its sellers -- cutting out third-party ad platforms -- but the cost for sellers is high. And there is no alternative.

Even though changing its fee structure provided a greatly needed influx of revenue, Etsy is walking a razor-thin line between charging too much and charging too little. Etsy was built on its sense of community between business-minded artisans and their buyers, and higher fees may push smaller sellers off its platform in a move counter to its brand identity, threatening its turnaround.

At the beginning, social media posts seemed to bolster the threat of a backlash, but Etsy reported that active sellers grew 26.4% year over year in FY20 Q1, rather than falling. Of course, Etsy Ads was only introduced in February of this year, and the company's response to COVID-19 included a temporary abatement of ad service referral fees, as well as extended free trials, so the jury remains out. But the numbers thus far indicate that the increased fees have not impacted the platform negatively despite the furor.

Therefore, assuming low seller churn, Etsy seems likely to enjoy highly stable growth ahead. Etsy has worked hard in the past three years to control its costs, and stratifying its seller packages in a manner similar to other e-commerce platforms has clearly benefited its bottom line. Its trailing-12-month operating expenses are holding stable at 55% of revenue, and with consistent growth, Etsy looks well positioned as a long-term value. More people are shopping online, and individuals are looking to diversify their income streams as their jobs grow more precarious. So long as Etsy does not squeeze its sellers too tightly, the company should see its platform continue to grow.