Despite the brutal economic conditions that still have much of the economy on the sidelines, and the resurgence of COVID-19 cases in recent weeks, some of the most beaten-down stocks are leading today's charge higher for the S&P 500 (SNPINDEX:^GSPC). The index ended the week of July 10 up 32.9 points, or 1%, closing out a volatile week with a 1.7% gain.

Today's market gains were broad, and largely driven by an announcement from Gilead Sciences (NASDAQ:GILD) that a treatment for COVID-19 was showing positive results in phase 3 trials. This positive news was enough to offset another day of record new cases, and another surge in the number of deaths related to COVID-19 for the second straight day.

Three sectors that have had a tough year so far led the charge: cruise lines, airlines, and financial services and bank stocks. Another notable gainer for today was Netflix (NASDAQ:NFLX), which saw its stock surge 8% to yet another all-time high. 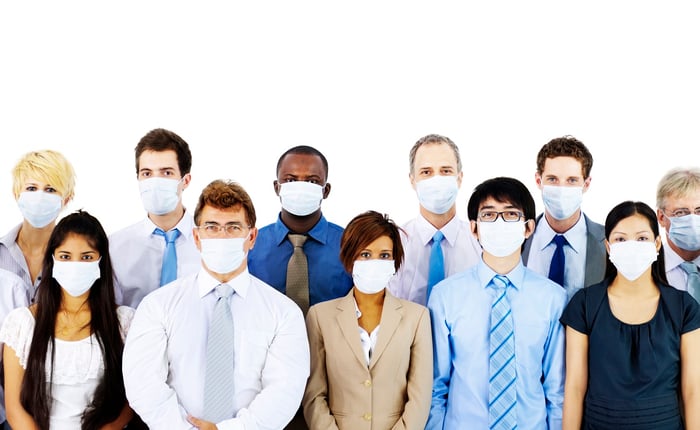 An analyst at investment bank Goldman Sachs (NYSE:GS) thinks Netflix is playing it conservative with its growth estimates, and that his fellow followers of the streaming giant are too. Heath Terry just announced expectations that the company added as many as 12.5 million new subscribers last quarter, compared to the company's own target of 7.5 million.

As a result of these expectations that the company is set to continue dominating the streaming market and add more original content, Terry raised his price target on Netflix stock to $670, nearly one-third higher than the price when trading closed the prior day. As a result, investors are piling in, sending shares to yet another all-time high.

Carnival Corporation (NYSE:CCL), Royal Caribbean (NYSE:RCL), and Norwegian Cruise Line Holdings (NYSE:NCLH) closed up 10.1%, 8.8%, and 7.4% today, following an SEC filing by Carnival with a business update. The company said that while it is still burning a massive $650 million per month in cash and expects this will continue through year end, it is taking some steps to reduce that burn.

The company also said that it could double the number of vessels it planned to permanently remove from operation, either by sale or other means. The goal is to reduce cash burn to at most $250 million per month. The company announced some other actions, including reaching an all-stock deal to fully acquire a subsidiary, and additional debt deals to increase its liquidity as the industry remains locked at port for months to come.

Today ends yet another very volatile week for cruise line investors, but a profitable one, with all three of the biggest operators closing up for the week. Rest assured that the volatility will return next week, and remain the reality for these stocks for many months to come.

The implications for an effective treatment are enormous; a vaccine is not likely before 2021, and is no guarantee. So giving physicians a tool to treat severe cases and save lives would be a huge boost for humanity in the months to come. On the economic front, that would go a long way toward allowing for more air travel as countries reopen their borders and economic activity resumes.

It's still very early in this story, and even if remdesivir is approved, its level of effectiveness could still be relatively low. At this point, airline -- and cruise line -- stocks will likely be very volatile over any potential positive or negative news. United just reached a deal to offer early retirement and buyouts to pilots in an attempt to avoid the number it has to furlough, while American is considering canceling orders for some new aircraft. Even with an effective treatment, air travel is likely to remain far below prior levels well into 2021.

Banks bouncing back ahead of earnings

The SPDR S&P Bank ETF (NYSEMKT:KBE) finished the day up 4.8%, the best-gaining sector for today, and largely on the same positive news about remdesivir that's helping boost the market to close the week.

Today sets a hopeful tone for the big banks heading into next week, when JPMorgan, U.S Bank, Citi, Wells Fargo, and Bank of America all report their second quarter results. Not only will their results tell us a lot about their own business, but the sheer scale of assets they own will help inform the market about the economic outlook for the entire U.S. economy heading into the second half of the year.

Yet even after a good day, investors remain very down on the banking sector. To date, the SPDR S&P Bank ETF is down 37% from the 2020 high.

Looking for more on bank industry earnings? Tune back in next week for coverage as each of the megabanks report over the course of the week.