Please ensure Javascript is enabled for purposes of website accessibility
Log In Help Join The Motley Fool
Free Article Join Over 1 Million Premium Members And Get More In-Depth Stock Guidance and Research
By Billy Duberstein - Jul 11, 2020 at 8:30AM

Investing in these diverse technology companies will allow you to benefit from hot trends while getting paid along the way.

Though viewed broadly, the stock market is booming, there are really only a few types of stocks that are working right now. Among them are technology stocks, which are benefiting from long-term digital trends and the stay-at-home-economy. Another in-favor variety are dividend-payers -- or, at least, companies whose payouts are perceived to be safe. With so many companies suspending or cutting their dividends in this low-interest environment, stocks that can still pay out dependably are in high demand.

Why not combine the two? Whether you're looking for a high-growth stock with a low but growing dividend, a low-priced value stock that has currently high-yielding dividend, or something in between, the technology sector today offers something for every type of income investor. 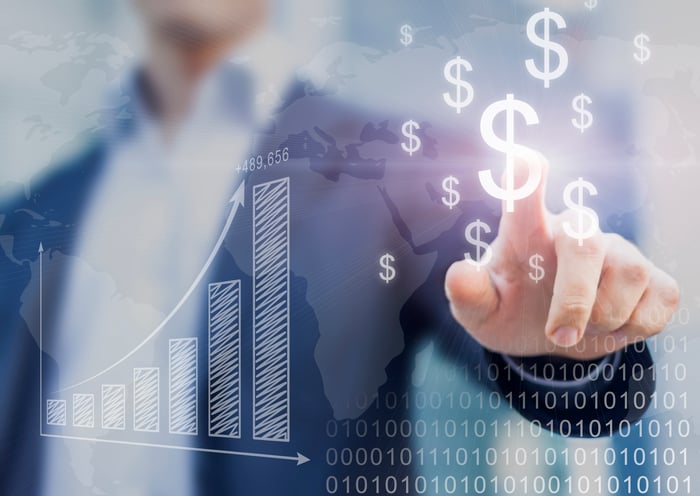 Microsoft: Cloud-level growth with a hint of dividends

You might be surprised to see Microsoft (MSFT 2.43%) mentioned in a dividend-related article. After all, it's trading at a rather lofty valuation, and its current yield is only 0.96%. However, for those interested in total returns, Microsoft has been hard to beat over the past few years. 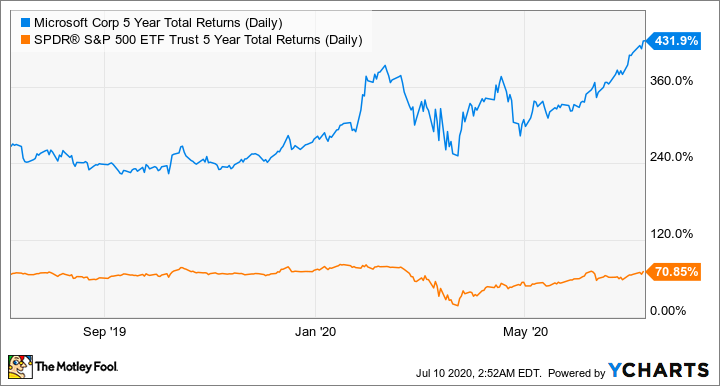 Despite its huge climb, I still think Microsoft is a solid buy, especially on any dips. It has several wide-moat businesses in its Windows operating system, its Office and Dynamics enterprise software suites, the LinkedIn social network, and others. But the two real catalysts for Microsoft over the next few years will be the continued growth of its Azure infrastructure-as-a-service (IaaS) platform and the launch of a new Xbox gaming console later this year.

Microsoft Azure has grown into a strong second-place position in the cloud infrastructure business and is taking market share. Last quarter, Azure revenues grew by a whopping 61% in constant currency, even though it's already become quite a large part of Microsoft's business.

Azure is part of Microsoft's intelligent cloud segment, which has gone from being its smallest segment to its largest in just the past year, thanks to growth that was faster than that of both the "productivity and business process" and "more personal computing" segments. That means Microsoft actually has a chance of maintaining the 15% revenue growth rate it achieved in the recent quarter, or even accelerating from it.

Throw in the pending release of the first new Xbox game console in seven years, and Microsoft's personal computing segment could get a nice boost as well.

Microsoft is the only public cloud IaaS stock that pays a dividend, and is also a near-cinch to raise it this year and beyond. How many stocks in the market can say that? And with the U.S. 10-year treasury yielding a mere 0.6%, investors could do far worse than Microsoft's 0.96% (and growing) payout.

CenturyLink: A deep-value telecom yielding over 10%

Despite the monumental gains posted by technology growth stocks, some older tech companies are actually still quite cheap. While value stocks have greatly underperformed for shareholders over the past decade or so, and it's hard to go against momentum, CenturyLink (LUMN 0.18%) offers a dividend that currently yields 10.5%, and the payout appears well-covered by free cash flow.

CenturyLink didn't get to that high yield by raising its payout. In fact, the company slashed its dividend in early 2019, much to the chagrin of many shareholders. The stock was sold off to bargain-basement levels, which is why the yield is so high today.

Why the dividend cut? Well, CenturyLink had merged with Level 3 Communications, another large telecom, in late 2017, and took on sizable debt to do so. While the combination is yielding billions in synergies, parts of their businesses such as landline phones and older networking products were shrinking.

As a result, the combined company's overall revenues have declined over the past few years. Still, those revenue declines are decelerating, so the slide could bottom out soon. Meanwhile, adjusted EBITDA margins have increased, which has kept profits and free cash flow flat. And while some of its products are in decline, the company's global fiber-optic network will continue to be needed for high-speed applications like 5G, the Internet of Things, and cloud computing. Because it's only using about one-third of its cash flow to cover its dividend, CenturyLink has the ability to invest in its fiber network while also paying down debt. The new $2 billion in annual debt retirement has also enabled CenturyLink to refinance other high-priced debt with lower-interest debt, leading to significant interest expense savings.

In its May earnings release, CenturyLink confirmed it was maintaining its dividend payment even as it withdrew its guidance due to COVID-19. With the company's dividend intact and CEO Jeff Storey hitting targets on the company's turnaround efforts, CenturyLink could be a compelling value play, especially if it can manage to turn the revenue trend positive.

Taiwan Semiconductor Manufacturing: has a solid yield and solid growth

Finally, somewhere in between the growth juggernaut of Microsoft and the deep-value stock of CenturyLink is Taiwan Semiconductor Manufacturing (TSM 4.06%), which currently yields 2.6% and offers solid growth prospects as well.

Taiwan Semiconductor is the largest semiconductor foundry in the world, meaning it only manufactures chips for other tech companies. But its clients include giants like Apple (AAPL 2.62%), Qualcomm (QCOM 3.14%), and Nvidia (NVDA 5.92%). Currently, it has a lead over other manufacturers on leading-edge semiconductors -- the most advanced, difficult-to-manufacture chips in the world.

There's huge demand for leading-edge chips right now as companies look to gain an edge in artificial intelligence and countries all over the world attempt to build out their 5G infrastructure. In fact, the U.S. government recently agreed to subsidize a Taiwan Semiconductor manufacturing plant in Arizona just to get some of its operations within U.S. borders.

Despite the pandemic, management predicted on its most recent conference call that the company would still grow revenue by a percentage in the mid-to-high teens in 2020. Taiwan Semiconductor is firing on all cylinders right now, and still trades at a reasonable 22 times forward earnings and with that nice 2.6% yield. As such, this high-quality stock should be considered for a core position in any income-focused portfolio.