Please ensure Javascript is enabled for purposes of website accessibility
Log In Help Join The Motley Fool
Free Article Join Over 1 Million Premium Members And Get More In-Depth Stock Guidance and Research
By David Jagielski – Jul 11, 2020 at 7:35AM

Investors should take any growth projections in the industry with a grain of salt.

It's easy for investors to get caught up in the hype surrounding the cannabis industry, especially when expectations are sky-high. And in many cases, it's cannabis companies that are making life difficult for themselves by coming up with aggressive forecasts only to fall short of them later.

There are plenty of examples of cannabis companies falling short of their own expectations. Below are four of the worst occurrences.

In April 2019, then-CEO Bruce Linton projected that Canopy Growth (CGC 4.41%) would generate over 1 billion Canadian dollars ($744 million) in revenue over a 12-month period starting April 1, 2019, which is the start of the company's fiscal year. On June 1 of this year, the company released its results for 2019, ending March 31. The Ontario-based pot producer was nowhere near reaching that target. 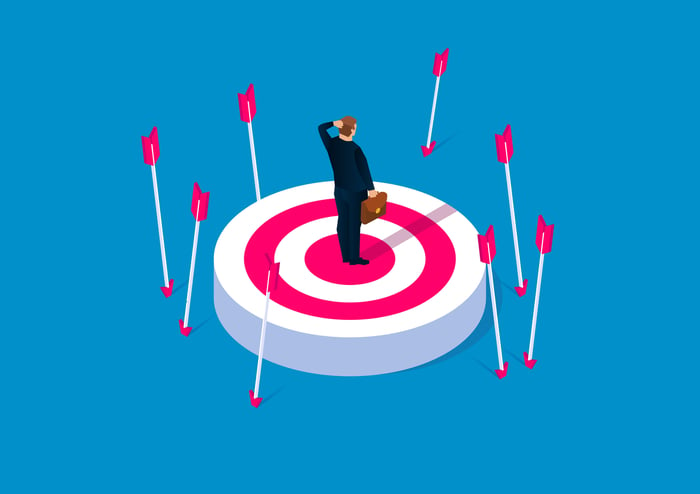 Revenue for the full year came in at CA$439.6 million -- not even half of the amount Linton was projecting just over a year ago. Linton's not the only one to blame, however, as even analysts were expecting the company's sales to hit CA$840.5 million.

The cannabis industry in Canada has struggled with a shortage of pot shops, and it's been an uphill battle for companies to gain market share. However, even today, with more stores open, Linton's projection would likely be very optimistic. In the fourth quarter, Canopy Growth's net revenue totaled CA$107.9 million. Extrapolated over four quarters, the company's still nowhere near the run rate it would need in order for CA$1 billion to be a realistic goal.

In hindsight, saying Linton's projection was optimistic would be a significant understatement.

When HEXO (HEXO -0.35%) announced in June that it was "on track" to reach its target of CA$400 million in net revenue for the 2020 fiscal year, that seemed like an overly optimistic projection for the company. It was coming off a quarter when it generated just CA$15.9 million in sales -- before excise taxes.

And indeed, HEXO's nowhere near that CA$400 million tally. Over the past four quarters, its net revenue totaled just CA$68 million.

What makes this projection so bad is that in October, only months after saying things were going well, HEXO abandoned its outlook for the year. CEO Sebastien St-Louis defended the move to throw out the forecast, saying, "Given the uncertainties in the marketplace, we have determined that it is the appropriate course of action. We are also placing a greater focus on profitability. We are evaluating our plans and operations to see where we can be even more efficient."

Ironically, profits aren't any better either. HEXO has incurred a net loss in each of its past 10 quarterly results. For the nine months ending April 30, HEXO reported a net loss of CA$377.9 million, compared with CA$24.9 million over the prior-year period.

3. Aurora missing its own sales forecast, one month out

One of the more remarkable misses undoubtedly came from Aurora Cannabis (ACB -1.64%), which missed a sales forecast released just one month before its results. On August 6, 2019, the company provided investors with an update for its fourth-quarter results, which it planned to release the following month. In the update, Aurora said it was expecting net sales to come within a range of CA$100 million and CA$107 million.

Missing analyst expectations is understandable -- outside analysts are working with many more assumptions than insiders would be. But for a company to miss its own projections is a harder pill for investors to swallow, especially when the results were so near to being released. Aurora's internal reports were likely near completion at the time the update was given, and there should have been complete certainty that the company would hit its forecast.

4. The "Starbucks of cannabis"

Another amusing forecast came from a small cannabis producer, Golden Leaf Holdings, which created some lofty expectations for itself when CEO William Simpson in 2018 said, "Like Starbucks is to coffee, we believe Chalice will be to cannabis." The CEO was referring to the company's Chalice Farms-branded marijuana shops. Today, Golden Leaf is a minnow in a sea of cannabis companies; it has a few locations in the Portland area, but is nowhere near its ambitious goal.

The takeaway for cannabis investors

What's important for investors to remember in all of this is that expectations are just that -- expectations. There's no guarantee they'll come to fruition, and it's risky to base an investment decision on sales or profit numbers that may never materialize. While investors don't want to ignore the future opportunities that exist for a company, they also shouldn't rely on them, especially in an industry like cannabis where there's so much uncertainty and volatility.

At the very least, investors should do their own analysis in assessing how realistic some of these targets are. Aside from the revenue miss by Aurora, all the projections listed here were far too bullish; the companies would have required best-case scenarios in order to meet their expectations.

Investing in pot stocks is a risky venture, and investors are better off scaling back whatever expectations they see and hear from companies because in many cases, they're often going to be a bit too optimistic.