Please ensure Javascript is enabled for purposes of website accessibility
Log In Help Join The Motley Fool
Free Article Join Over 1 Million Premium Members And Get More In-Depth Stock Guidance and Research
By David Jagielski – Jul 11, 2020 at 7:48AM

These stocks were beating the S&P 500 entering July.

Beating the markets isn't an easy task for pot stocks. In 2019, the Horizons Marijuana Life Sciences ETF (HMLSF 3.30%) crashed 39%, and it's already down another 24% during 2020. That's compared with the S&P 500's near-breakeven performance; the index is down just 2% this year.

Pot stocks that are able to outperform not just the Horizons ETF but the S&P 500 aren't all that common. But through the first six months of the year, both of the stocks listed below have done just that. And if you've got $5,000 to invest with, you should consider buying these high growth stocks today.

By the end of June, GW Pharmaceuticals (GWPH) stock was up 17% from the start of the year. During that time, the Horizons ETF was down 22% and the S&P's return was a negative 4%. 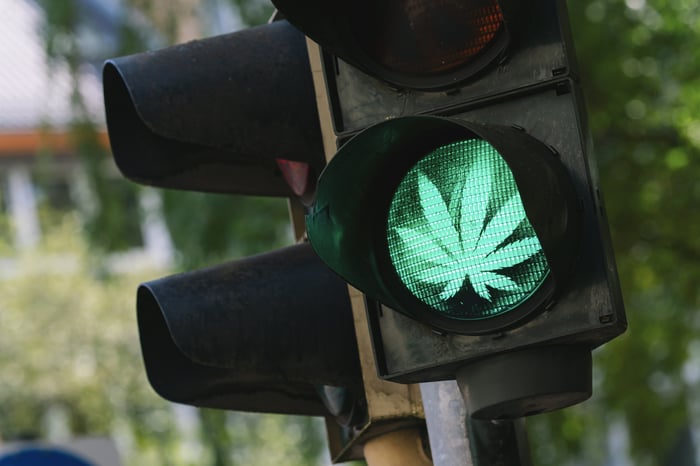 One of the reasons GW is likely an attractive buy for investors this year is that it's arguably more of a healthcare company than other many in the cannabis space. Its Epidiolex drug treats people, often children, with two rare forms of epilepsy -- Dravet syndrome and Lennox-Gastaut syndrome. It falls into the category of a pot stock because Epidiolex is cannabis-based. It's the only drug the U.S. Food and Drug Administration (FDA) has approved that's derived from marijuana.

Besides it just being a safe stock, another reason investors are buying shares of GW is because of growth -- not just what the U.K.-based company has already achieved, but all that's still available. Last year was when GW began to attract a lot of attention, as it was the first full year Epidiolex contributed to the company's sales. And it did so in a big way, with $296.4 million of GW's $311.3 million in revenue coming from the new drug. In 2018, GW's revenue totaled just $15.4 million.

Strong revenue growth has continued in 2020. In the company's first-quarter results, released on May 11, GW's sales of $120.6 million were triple the $39.2 million it reported in the prior-year period.

But the growth is still in its early stages. In September 2019, the European Commission approved Epidiolex in Europe to treat the same types of seizures that it can treat in the U.S. market, Dravet syndrome and Lennox-Gastaut syndrome.

With more sales growth coming this year, the stock's an attractive buy, and still not as expensive as some other pot stocks: 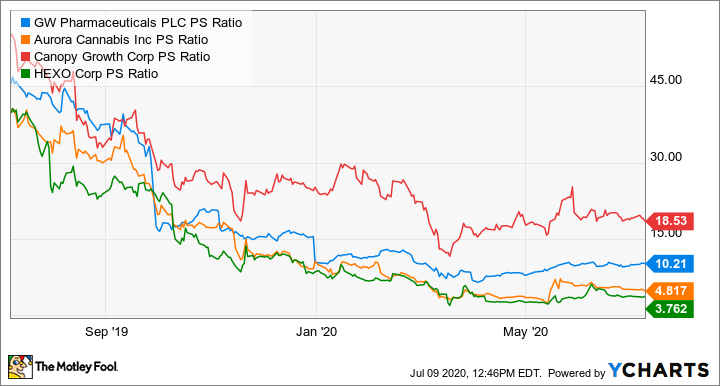 The more its sales rise this year, the more of a bargain GW will become. It's also a safer buy than other pot stocks, as it looks to be in good shape to post a profit. In Q1, its net loss of $8 million was a sizable improvement from the $50.1 million loss it incurred in the prior-year period.

Curaleaf Holdings (CURLF -0.15%) is in both the medical and recreational marijuana businesses, and that gives the Massachusetts-based company many opportunities to expand, especially as more states progress on marijuana legalization.

As of the end of June 30, Curaleaf's stock was down 3% year to date, just slightly ahead of the S&P 500. The stock's struggled in the early days of July, and it's now below the S&P 500. However, this is another appealing growth stock that may be even more attractive to buy given its recent dip in price.

It's enjoyed similar growth to that of GW. In its first-quarter 2020 results, which Curaleaf released May 18, the company's sales of $96.5 million were up 174% from the prior-year period's tally of $35.3 million.

A big part of Curaleaf's growth is thanks to expansion. In July 2019, the company announced a deal to acquire vertically integrated cannabis company Grassroots, and in February it closed on its acquisition of cannabis wholesale brand Select, which gives Curaleaf a strong footprint on the West Coast.

The company's still looking for ways to grow, with management announcing in the past few months that Select products will expand into more states, including Connecticut and Oklahoma.

Once the Grassroots deal is complete, Curaleaf will have a presence in 23 states. That's nearly double the 12 states it operated in back in January, prior to the closing of the Select acquisition.

Curaleaf's also a slightly better buy than GW based on their most recent price-to-sales multiples: 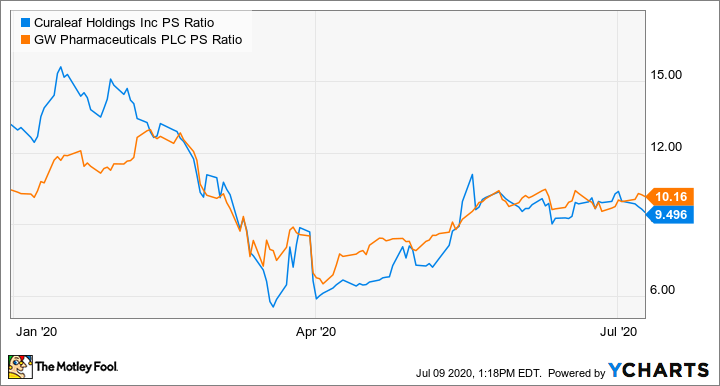 Holding both of these stocks can give you great exposure to the international and domestic cannabis markets, especially as more states move to legalize pot in the U.S.

But if you only want to buy one of these stocks, I'd suggest going with GW. It's been performing better this year, and for good reason -- it's likely much more stable over the near term. Medical marijuana is legal in many countries and U.S. states, and that means there are fewer obstacles in the way of GW's growth and less uncertainty surrounding its future.