Please ensure Javascript is enabled for purposes of website accessibility
Log In Help Join The Motley Fool
Free Article Join Over 1 Million Premium Members And Get More In-Depth Stock Guidance and Research
By Adam Levy - Jul 11, 2020 at 11:30AM

It's about who those sign-ups were.

Disney (DIS 3.30%) saw a surge in sign-ups for Disney+ during Independence Day weekend after releasing Hamilton last Friday. Third-party data companies saw a spike in downloads for the Disney+ app. CEO Bob Chapek didn't say exactly how many new sign-ups the company saw, but noted "there were a lot of them," according to an audio recording of an all-hands meeting leaked to The Verge.

Chapek's full quote is actually much more informative: "A great percentage of the new viewers that came into Disney+, and there were a lot of them, were a different target audience, a different demographic than what we normally get."

Hamilton didn't just increase sign-ups and viewership for Disney+, but also expanded its audience. And Disney can take what it learned from the early release of the film production of the hit Broadway musical, and repeat the process to continue expanding the appeal of Disney+. 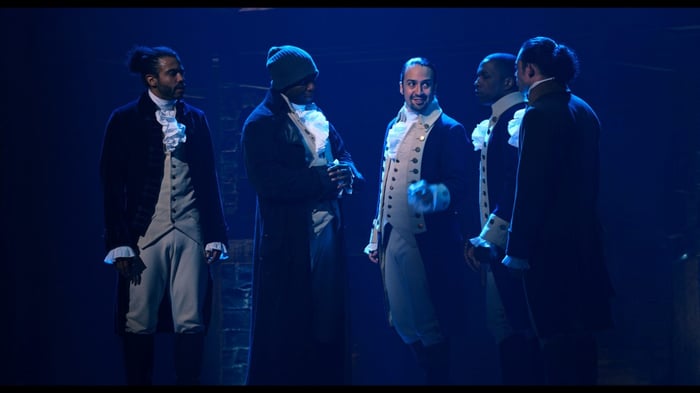 The risk around Disney+

Disney+'s early sign-up numbers have been far better than expected. It's likely already exceeded the high end of its original five-year outlook for U.S. subscribers (30 million).

But the risk for Disney+ is that it'll quickly sign up millions of subscribers and then growth will completely fall off a cliff. That's because Disney+ is an easily understood product thanks to the company's strong brand and excellent marketing messaging. People that want it knew they wanted it even before it launched. Indeed, only 19% of subscribers said they signed up to watch Disney+ original series in a December survey, and that was after "Baby Yoda" went viral.

But after strong sign-ups in the first six months of the service, investors' expectations have spiked. While Disney set expectations for just 90 million subscribers tops in that time, the market has deemed those numbers too conservative.

At least one analyst thinks Disney+ will top 200 million global subscribers by mid-decade. If Disney can't continue adding subscribers after it finishes its launch in every market, it won't reach that number.

For Disney+ to attract subscribers on the scale the market's now expecting of it, it needs to expand the appeal of the platform beyond those that were planning to sign up anyway.

Disney's move to release Hamilton a year early on Disney+ could not have been an easy decision. The producers of the stage show strongly resisted the idea until it became very apparent theaters would likely remain closed through the end of the year.

But the success of Hamilton to draw in an audience to Disney+ outside of the service's wheelhouse is a testament to Disney's strength as a streamer. It went from announcing the film's release to its debut in less than two months. It was able to capitalize on the strong intellectual property, a huge fanbase for the original musical, and excellent marketing capabilities.

Importantly, all of those factors are imminently repeatable for Disney. It has the deepest catalog of valuable intellectual property. On top of that, management has a keen eye for rights like Hamilton that still make sense under the Disney brand umbrella, but push it slightly beyond its core. Disney consistently tops the box office receipts when movie theaters are fully operational as a result.

Taking that approach to expand the audience of Disney+ is something the media company is already considering beyond the near term. "We're going to evaluate each one of our movies on a case-by-case situation," Chapek said during Disney's second-quarter earnings call. While the company sees its best opportunity is still in theaters for most films, it understands it may have to change course in some instances amid "changing and evolving consumer dynamics."

Two or three releases per year that may have been hits on premium video on demand could be much more valuable as Disney+ exclusives. That's especially the case if they can have the same kind of impact on broadening the subscriber base as Hamilton.