Please ensure Javascript is enabled for purposes of website accessibility
Log In Help Join The Motley Fool
Free Article Join Over 1 Million Premium Members And Get More In-Depth Stock Guidance and Research
By Adria Cimino – Jul 11, 2020 at 10:56AM

Digital sales and pick up options are future bright spots for Target.

Like most retailers, Target (TGT -0.35%)has suffered during the coronavirus crisis. The company posted lower sales of high-margin items, such as apparel, and incurred health and safety expenses related to the outbreak. All of that weighed on earnings.

Still, overall, Target managed to win in key areas that limited damage and set up the store for better days. As long as the COVID-19 crisis doesn't lead to more lockdowns, Target's better days may begin as early as a year from now. What are these key areas that are helping Target score a win with customers? Digital and delivery. Here's a closer look. 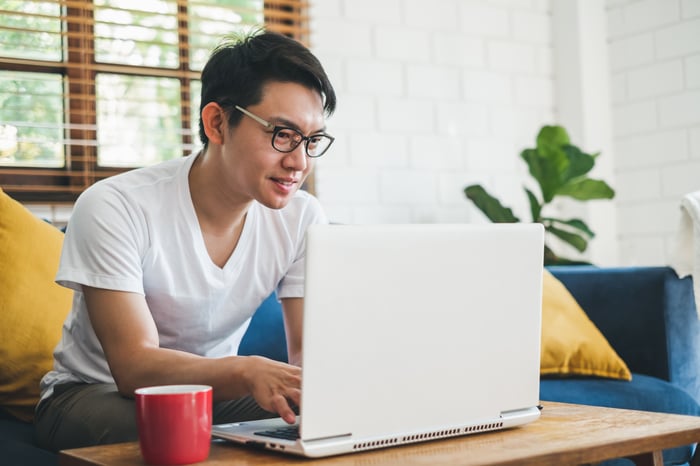 Ahead by three years

In the first quarter, Target's digital same-store sales surged 141%. In fact, the company said on its earnings call that the volumes it saw in e-commerce weren't expected for another three years. The positive in this is that digital sales are soaring, and even if a return to normal activity slows things a bit, Target is still likely to remain way ahead of schedule in its digital growth plans. I'm optimistic here, because prior to the crisis, Target's digital sales had already been climbing for quite a while. Last year represented the sixth straight year of more than 25% digital growth.

Where Target could have had problems during the recent crisis was in fulfilling the unexpected jump in orders. Instead, Target said 95% of orders were ready for pick up or shipment right on time. That's a big plus, as it could be a decisive factor in a shopper returning or going elsewhere. Filling orders on time was one of the major factors defining the customer experience in a Bell and Howell survey.

Also in the first quarter, Target's units sold through its drive up option were higher than in all of 2019, and 40% of customers who used this option were new to the service. It's logical that drive up would make great gains during a pandemic when people avoid contact with others. Still, the health crisis isn't over, and many consumers continue to shop with caution. Beyond the crisis, shoppers may stick with this new routine for convenience -- at least some of the time.

Moving forward, Target is building on the first quarter's areas of success. Though Target prior to the outbreak already had planned to include fresh grocery to its pick up and drive up offer, it had to put the effort on hold as it prioritized the influx of orders from housebound consumers. Now seems the perfect time to put this plan back on track, and that's exactly what Target is doing. The offer, including 750 items, is now in 400 stores and will be in 1,500 before the holidays. Consumers using pick up and drive up don't have to sign up for membership, and they don't have a minimum spend level for this free service.

Beauty and household essentials contribute the most -- 27% -- to Target sales. Food and beverage, like most of Target's other categories, make up 19% of annual revenue. If Target is able to fulfill fresh grocery orders as well as it fulfilled other orders recently, it's likely the company will see growth in the food and beverage business perhaps as early as next year.

Target started to see recovery in demand for apparel in mid-April. Prior to the crisis, same store sales for apparel and accessories had been growing more than 5%, Target said in the recent earnings call. Then sales sank as consumers focused on buying essentials. The fact that consumers haven't been spending on clothing may result in pent-up demand, and that could result in sales growth in the coming months. And in a year, if the health crisis abates, it's likely buying habits for discretionary items will have found their way back to normal levels.

Target shares are on their way to recovering this year's loss. They're now down only 7.9% this year after falling as much as 29%. The stock is trading at about 22 times trailing 12-month earnings, slightly less than peer Walmart (WMT -0.99%), which trades at 24. At this level, the stock may attract investors hoping to add the healthiest retail shares to their portfolios. So, the picture for Target in about a year may be one of sales growth and share price growth.