Please ensure Javascript is enabled for purposes of website accessibility
Log In Help Join The Motley Fool
Free Article Join Over 1 Million Premium Members And Get More In-Depth Stock Guidance and Research
By Rich Duprey – Jul 14, 2020 at 11:20AM

Amazon.com (AMZN -1.57%) wants to bring the "just walk out" technology that powers its Amazon Go convenience stores to your local supermarket. But it won't be installing all the costly cameras, sensors, and artificial intelligence onto store ceilings and shelves. Instead, it's putting it all in a compact package that fits in a shopping cart.

The Amazon Dash Cart will debut at the Woodland Hills, California, grocery store the e-commerce giant opened earlier this year, which is separate from its Whole Foods Market chain.

Like the Amazon Go technology, the shopping cart version links to your Amazon account and, when you pass through a special checkout lane in the store, it automatically charges your account for the items in your cart. 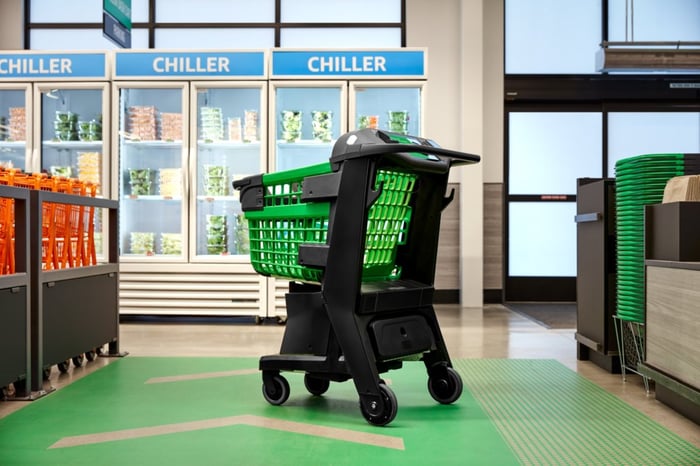 Amazon has previously considered licensing its "just walk out" technology to other stores, and it isn't the first company to trial smart shopping carts.

A start-up called Caper, for example, deployed its AI-powered smart shopping carts in a number of supermarkets in New York City several years ago with much success, a development that promised to make Amazon's "just walk out" technology obsolete because it was a much more affordable option for supermarkets. Amazon may have come to the same conclusion.

The tech company says the Woodland Hills store will include regular checkout lanes, but eliminating checkout chokepoints, one of the pain points consumers point to when shopping, has long been on the radar of supermarkets.

Amazon's new grocery store is not yet open to the general public. It had been scheduled to open this past February, but was delayed due to the coronavirus pandemic. It was instead temporarily converted to a so-called "dark store," exclusively fulfilling Amazon grocery delivery orders.