Vaccine development is not an all-or-nothing endeavor. INO-4800 can rake in hundreds of millions in revenue if approved, even if only partially successful.

As of July 12, the number of new cases of COVID-19 in the U.S. has surpassed 60,000 for the fifth day in a row. Unfortunately, this rise cannot be attributed to increases in testing. For most of last week, nearly 1,000 Americans died each day due to COVID-19, representing a 300% increase from the death rate just a week prior.

Hence, the need for a coronavirus vaccine becomes more dire day by day. One of the front-runners of this endeavor is Inovio Pharmaceuticals (INO 1.09%). While it's already returned 601% year-to-date, I think shares have the potential to rally even further due to the potential of its COVID-19 vaccine candidate. 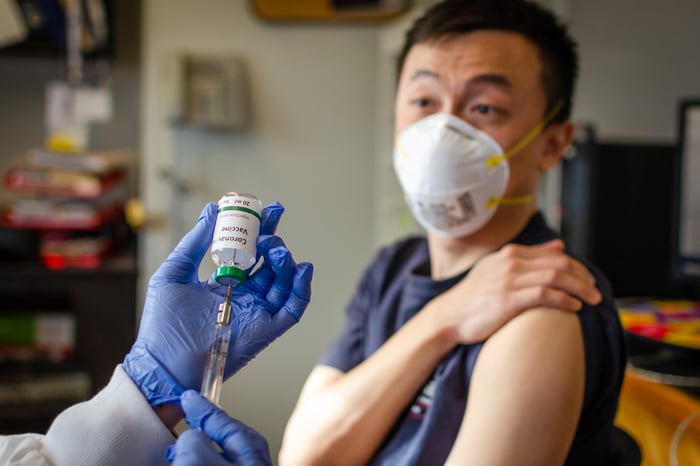 In search of a coronavirus vaccine

The vaccine is called INO-4800 and works by injecting synthetic viral DNA into healthy individuals, causing their bodies' immune systems to develop protective antibodies against the SARS-CoV-2 virus. Inovio boasts that the vaccine was designed in just three hours after the genome for SARS-CoV-2 was published in February.

In May, the vaccine produced robust antibody and T-cell responses in mice and guinea pigs, and advanced to the phase 1/2 stage for human trials. At this stage, 40 healthy adult volunteers aged 18 to 50 received INO-4800 to study its safety and immunization potential. Participants received 1 mg or 2 mg doses four weeks apart.

Last month, an interim data release indicated that 94% -- or 34 out of 36 -- healthy volunteers who received INO-4800 demonstrated immunological response.

While this may initially seem like good news, it's actually neutral at best. For starters, the body will naturally produce antibodies against any foreign substances, and just because patients produced antibodies after being given a vaccine does not mean the antibodies have a therapeutic effect.

Unfortunately, Inovio did not disclose how many volunteers developed neutralizing antibodies (antibodies that actually block the activity of SARS-CoV-2) after being administered the experimental vaccine. Without this crucial metric, it is impossible to make any efficacy claims from the clinical trials. However, the company does plan to proceed to phase 2/3 clinical trials for INO-4800 sometime in the summer, putting it ahead of nearly 35 reputable competitors.

Why the stock is a strong buy

Inovio is a strong buy because of how low the bar is for approval of coronavirus vaccines. Currently, the U.S. Food and Drug Administration mandates that experimental COVID-19 vaccines demonstrate a 50% improvement against placebo for commercialization. Keep in mind that's 50% improvement relative to a dummy, not a 50% response rate in terms of developing neutralizing antibodies.

Hence, for the sake of argument, even if INO-4800 demonstrates it can lower the infection rate of COVID-19 to 1% in study participants compared with 2% of patients that received no vaccine, then INO-4800 would still be approved under the current FDA mandate. I think it is more than likely that at least some of the 94% of patients who took INO-4800 and developed an immunological response also experienced a neutralizing antibody response that can prevent or mitigate COVID-19. At the end of the day, a vaccine that works partially is better than no vaccine, and can still save countless lives when given to seniors and the immunocompromised.

The market opportunity for a potential COVID-19 vaccine is vast. At an affordable price of $100 per shot, a company that commercializes its vaccine can rake in $1 billion in revenue by producing 10 million doses. Currently, Inovio has the capacity to manufacture up to 1 million doses by year-end.

With recent backing from the U.S. Department of Defense for INO-4800's development program, I think the rally is far from over for this $3.7 billion mid-cap company. Hence, growth investors in the biotech industry should definitely have Inovio in their portfolios.