Energy Transfer is a risky bet in every way.

Energy Transfer (ET -0.58%) stock is surely the worst-hit stock among its top MLP peers. Since October 2018 -- when Energy Transfer Equity and Energy Transfer Partners were merged to form the current entity -- the stock has fallen roughly 63%. In comparison, top MLP peers Enterprise Products Partners (EPD -0.48%) and Magellan Midstream Partners (MMP -0.13%) have fared better, though these too couldn't escape the impacts of broader energy market challenges. Energy Transfer stock is trading at a very attractive price currently. Is the market overlooking an opportunity?. 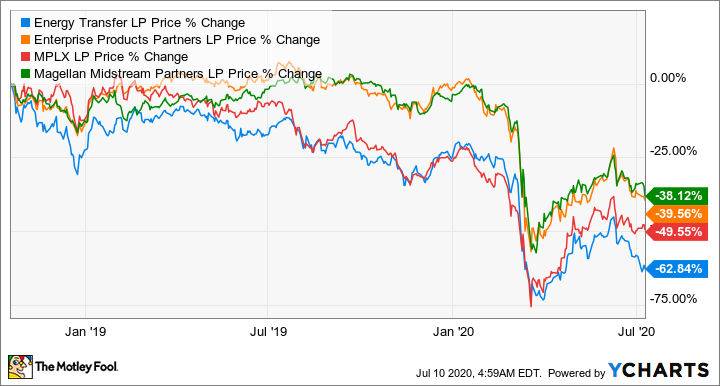 Energy Transfer's underperformance over the last couple of years is not without reason. The company grapples with several issues that get reflected in its beaten-down stock price.

First, Energy Transfer is highly leveraged. In uncertain and challenging times like these, this is a big deal. Energy Transfer's debt has quadrupled in less than a decade, thanks to its numerous acquisitions and growth projects. The company's debt-to-EBITDA ratio over the trailing 12 months stands at 5.7 times, which is considered pretty high even for a higher leverage business like infrastructure.  For comparison, the ratio for Enterprise Products Partners is 3.6 times. Energy Transfer's aggressive growth strategy of taking on debt to pursue expansion may not be in the best interests of its shareholders. A rising debt-to-EBITDA ratio likely indicates that the company's projects are generating lower returns at relatively higher expenditures.

If Energy Transfer's debt-to-EBITDA rises further, covenants under its credit facilities may force it to cut distributions.  The company may also see a credit downgrade from rating agencies, resulting in increased borrowing costs. Moody's recently changed its outlook for Energy Transfer to negative from stable, while maintaining its Baa3 rating. The rating agency cited a recent court order requiring the company to shut down its Dakota Access pipeline as the reason behind the change in outlook. 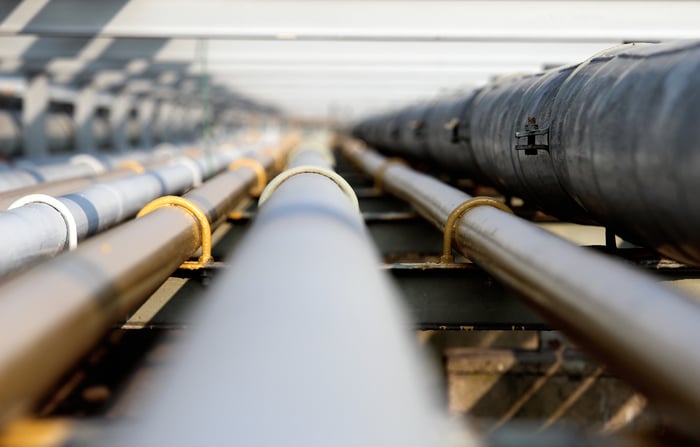 Apart from high leverage, and the resulting risk of a distribution cut, Energy Transfer also faces regulatory risks on its pipelines. In the latest instance of such risk, a district court recently ordered Energy Transfer's key Dakota Access pipeline to shut down by Aug. 5, pending an environmental review. The company intends to file a motion to stay the decision.

The Dakota Access pipeline is one of America's most controversial pipeline projects. The pipeline started operations in 2017 after years of controversy and environmental reviews. After three years in operation, the current order may not shut pipeline for long, but it still highlights one of the key risks pipeline operators face. In all scenarios, Energy Transfer must, at a minimum, bear expensive legal costs to continue operating the pipeline. Notably, a temporary shutdown may not have a major impact on Energy Transfer's overall earnings, as Dakota Access contributes less than 5% to the company's earnings. However, frequent controversies relating to Energy Transfer's pipelines highlight the company's risk in this area.

Another key risk that Energy Transfer faces is a default on contracts by producer customers facing bankruptcy. Chesapeake Energy's bankruptcy filing last month is a case in point. As part of the restructuring, Chesapeake wants its $293 million contract with Energy Transfer on its Tiger pipeline to be canceled.

Admittedly, counterparty and regulatory risks are not limited to Energy Transfer. All pipeline operators face these risks. However, it is the extent of risk, coupled with high leverage, that makes Energy Transfer's situation more alarming. As of March, 81% of Energy Transfer's unsecured credit exposure was to investment-grade counterparties. Though this looks impressive, it includes Energy Transfer's internal ratings for counterparties not rated by rating agencies. In the absence of published ratings, this leaves the picture hazy.  Basically, the company doesn't have too much wiggle room if things go wrong on any front.

Energy Transfer's stock price and high distribution yield look incredibly tempting.  Its extensive asset footprint holds lots of value, as it takes years to build pipelines. However, the waiting period for the stock's eventual recovery could be really long and may be accompanied by a distribution cut. Moreover, looking at its track record, the company is prone to frequent, if not endless, issues due to its aggressive growth strategies. I feel it's better to look for attractive opportunities elsewhere than to take on this risky bet.

Rekha Khandelwal has no position in any of the stocks mentioned. The Motley Fool recommends Enterprise Products Partners and Magellan Midstream Partners. The Motley Fool has a disclosure policy.