Please ensure Javascript is enabled for purposes of website accessibility
Log In Help Join The Motley Fool
Free Article Join Over 1 Million Premium Members And Get More In-Depth Stock Guidance and Research
By Jim Halley – Jul 14, 2020 at 7:38AM

The company's subscription-based model is paying off.

The membership-based healthcare company, which emphasizes its telemedicine options, is obviously well-positioned to grow in the middle of the COVID-19 pandemic, but is there more behind the stock's rise?

San Francisco-based 1Life, which also goes by One Medical, went public Jan. 31 with its shares initially priced at $14, so it has already made a lot of its early investors happy.

The company has 41 offices in the San Francisco Bay area and a total of 92 across eight statesand Washington, D.C., with plans to open 22 to 25 more this year. It offers companies primary care at small on-site or nearby locations, along with a digital platform. It also provides walk-in immunizations and lab services, plus programs for sports medicine, well-being, behavioral health, women's health, men's health, and pediatrics. The healthcare company has had to adjust its business model during the pandemic because so many more people are working from home, but its digital emphasis has allowed it to keep growing. 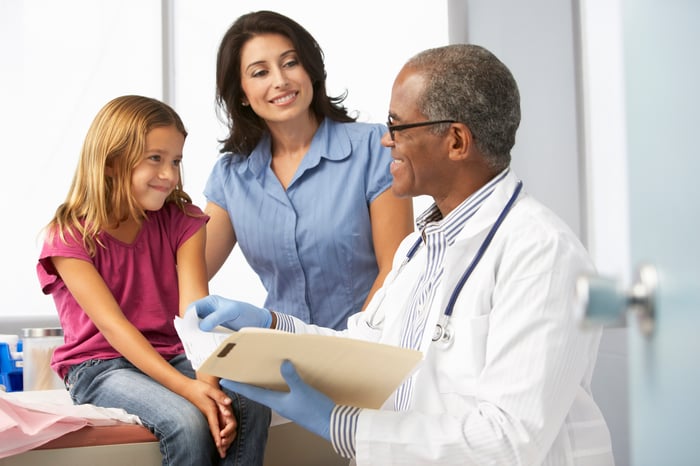 1Life has three revenue streams. Individual consumers can enroll directly for an annual fee of $199 per person, which has been a boon to those who have recently lost their jobs and thus their health insurance. A second revenue stream comes from businesses that pay those annual fees to enroll their employees in 1Life. Insurers also reimburse the company for immunizations, lab tests, and other services.

The company's growth is easy to see

A recent study published in JAMA: The Journal of the American Medical Association looked at 1Life Healthcare's model for primary care and found it offered considerable savings. Members spent 109% more on primary care and 20% more on mental health care than traditionally insured patients, but those higher outlays were more than compensated for by the 45% lower costs for medical and prescription claims, 54% lower costs on specialty care, and 33% lower costs on emergency department care.

"This study illustrates the value of implementing a modern primary care solution," said 1Life Chief Quality Officer Raj Behal in a press release. "When you create an effective healthcare home base for employees, you can see significant cost reductions by eliminating the need for more costly downstream care."

The usual levels of caution apply

1Life isn't turning a profit yet, but it is showing exactly what you want in a growth stock, with revenue increasing every year. Along with that, though, have come higher expenses. Last year, it lost $52.6 million, 18% more than it did in 2018. The hope, of course, is that the company's revenue gains will outstrip the expansion of its expenses, and with a compound annual growth rate of 16% over the past three years, that's certainly possible.

The company's subscription-based model appears to be popular, but it's not unique. There's also little to stop larger competitors from offering programs that use variants of 1Life's model.

The company doesn't have any direct competitors, but over the past three months, its shares have outpaced those of two other companies that are heavy hitters in the remote medicine space: Teladoc (TDOC -3.40%) and Anthem (ELV 1.32%). The company has a big backer -- Alphabet (GOOG -1.24%) (GOOGL -1.02%). The tech giant was responsible for 10% of 1Life's revenue last year, according to Bloomberg, because it pays for memberships for its employees and also pays fees to 1Life to operate clinics at various Alphabet offices. It's also one of 1Life's major investors through GV, its venture capital investment arm.

Given that the company has such strong support and a growing business model, I see a lot of promise for the stock. It also has a program that will be of use as more people return to working on-site for their employers following the pandemic. The One Medical Healthy Together plan is designed to screen employees for key COVID-19 symptoms and clinical risk factors, and provide further testing and follow-up care if needed.

2 Growth Stocks That Soared More Than 30% in July