Please ensure Javascript is enabled for purposes of website accessibility
Log In Help Join The Motley Fool
Free Article Join Over 1 Million Premium Members And Get More In-Depth Stock Guidance and Research
By Chad Henage – Jul 15, 2020 at 6:34AM

The online retail giant's acquisition of Zoox is the company's next big bet to cut billions in costs.

Imagine this: You're headed to work and realize you forgot to order laundry detergent from Amazon.com (AMZN -1.57%). You say, "Alexa, order laundry detergent," and the virtual assistant confirms your choice of brand, size, and price. When you get to work, your wife calls and says she needs the car earlier than expected today, and your daughter needs a ride to soccer practice.

You tell your wife, "No problem." You open the Amazon app on your phone, then schedule a car to pick up your wife, grab your detergent at the Amazon warehouse, pick up your daughter for soccer, and return to get you later in the day.

This may be the future that Amazon imagines with its acquisition of driverless start-up Zoox. 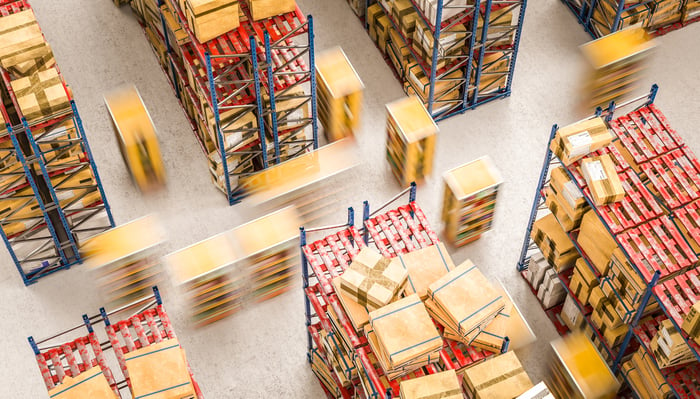 True, the ideas above might be a bit of a stretch. But Zoox could still potentially solve a multibillion-dollar problem for Amazon. At present, Zoox wants to build vehicles and design software for self-driving automobiles. Compared to heavyweight competitors such as Alphabet's (GOOG -1.98%) (GOOGL -1.82%) Waymo business and Tesla (TSLA -1.10%), this task seems daunting. Yet Amazon has never been afraid to make big bets to generate big returns.

Zoox's advantage compared to its peers is its focus. The company isn't aiming to make mass-market vehicles like Tesla. Instead, it's concentrating on a relatively small fleet cars specifically made for ridesharing in in dense environments like some of its test routes in San Francisco.

After a Zoox test ride, one Business Insider reporter wrote,  "My ride in Zoox's vehicle was more comfortable than those I took through Uber (UBER 0.30%) and Lyft (LYFT -2.30%) on my way to and from the airport.

Zoox co-founder Jesse Levinson has said that Zoox vehicles are designed for sharing, not for individual ownership. The company's system uses cameras, radar, and lidar on all four corners of its vehicles, which are expected to contain two batteries with a larger capacity than single battery options available today.

Zoox believes that a few thousand fully autonomous vehicles could move the same number of people to the same amount of places as far greater numbers of individually owned vehicles do today.

Why would Amazon buy Zoox now?

The combination of the pandemic, and the rise of one-day shipping, helped Amazon's total sales increase by 26% annually last quarter. However, investments in future capabilities caused Amazon's capital expenditures to increase 106% year over year to $6.8 billion.

In addition, Amazon spent $11.5 billion on fulfillment, which increased by more than 33% year over year. When two of your biggest costs are rising significantly faster than sales, it's a problem that must be addressed.

Amazon paid a reported $1.2 billion for Zoox, which reminds me of the company's previous acquisition of Kiva for $775 million in 2012. Kiva robots were deployed to cut personnel and fulfillment costs.

In 2017, it was suggested that these robots were saving Amazon as much as $22 million per year at each warehouse. The net present value of this acquisition was calculated as having a value of about $15 billion. Zoox would only need to help cut fulfillment costs by 3% to be worth the $1.2 billion cost. Of course, Amazon is hoping to do much better than that.

More than meets the ride

It makes sense that Amazon isn't looking at Zoox as just a ride-sharing company. There is nothing fundamentally different about delivering people versus a vehicle filled with packages. Zoox technology could be adapted to vans and other vehicles to focus on Amazon's last-mile delivery costs.

Initial estimates suggest that Zoox could one-up Kiva by generating as much as $20 billion in annual cost savings over time. Amazon spent over $40 billion on fulfillment last year alone. As e-commerce continues to grow, Amazon's fulfillment costs will likely climb for the foreseeable future.

Amazon Web Services (AWS) was born out of investments in the company's internal business; now it's a multibillion-dollar growth engine. Kiva was an acquisition with an eye on making Amazon's warehouses more efficient and is saving the company millions. Zoox may cut fulfillment expenses as Amazon grows into an even more potent e-commerce powerhouse. Amazon's next big bet should provide investors just another reason to buy the shares.