After receiving a warning about possible delisting from the NYSE, this cannabis company is trying to rebuild itself. Will it succeed?

After Canada legalized marijuana in 2018, all was going well for Canadian pot company HEXO (HEXO -1.98%) at first. Then the company started seeing a decline in revenue, challenged by cheaper prices on the illicit market. Regulatory delays and a lower-than-expected number of legal stores brought revenue down further, to the point that HEXO's share price fell below $1, the NYSE listing standard.

Because of this, HEXO has received an NYSE listing warning. It now has until the end of the year to get its shares trading above $1. The company is working not only to stay afloat amid the coronavirus crisis but to rebuild itself once the pandemic retreats -- which is evident from its entry into Israel's medical cannabis market. 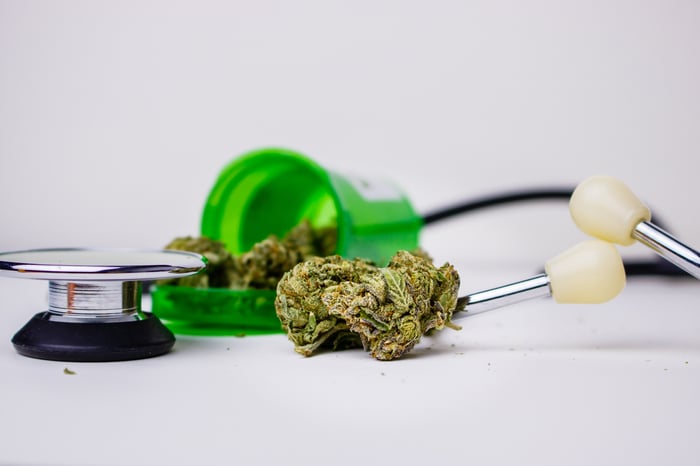 When I discussed HEXO's third-quarter results in June, I mentioned my concern that its business was limited to the Canadian market. Well, now it appears HEXO is exploring the benefits of diversification. Recently, it announced its entry into Israel's medical cannabis market, having set up a supply arrangement with Israeli medical cannabis company Breath of Life International.

Its first shipment to Israel consisted of 493 kilograms of its best-selling cannabis flower products, in a 10-gram format specifically designed for the Israeli market, with the packaging and labels in both English and Hebrew. HEXO's move into Israel might compete with Cronos Group (CRON -1.39%), which is expecting to sell its Peace Naturals-branded products by late summer in Israel's medical marijuana market.

Israel is a small market compared with Canada, but it has strict border controls, which limits black market activity. That could be advantageous for HEXO because illicit cannabis sales in Canada were one of the reasons for its revenue decline last year. In its fourth-quarter 2019 earnings call, management stated, "We don't believe the Canadian market will successfully penetrate the black market and see meaningful sales numbers until we can address the issues around access to legal cannabis and the in-store experience."

HEXO also eased into the U.S. cannabidiol (CBD) market through its partner Molson Coors Brewing. Through this joint venture, named Truss CBD USA, the company will launch non-alcoholic, hemp-derived CBD beverages in Colorado. They could provide some competition for cannabis beverages launched by Canopy Growth (CGC -1.65%).

Diversifying and spreading its business into international markets could give a huge boost to HEXO's revenue and profitability. Its revenue growth seems to be improving now; in its third-quarter results, it saw growth of 70% in net revenue (minus excise taxes) from the year-ago period to 22.1 million Canadian dollars. Profitability is still challenging, however. The company reported an earnings before interest, taxes, depreciation, and amortization (EBITDA) loss of CA$4.3 million in Q3, but that's an improvement from a loss of CA$8.5 million in the year-ago period.

Its third-quarter results benefited its stock. In June, HEXO's shares gained 7%, while the SPDR S&P 500 ETF was up less than 1%. Meanwhile, Cronos' shares declined by 9.2%

To save its stock from getting delisted, it is important for HEXO now to expand its business, move into high-yielding markets, and generate revenue growth to regain investors' trust. Its first step toward reaching those goals was to raise cash, as the company has been unable to hit profitability yet. Though cannabis sales are on a rise amid the pandemic, it did delay the launch of "cannabis 2.0" derivative products, as well as adding to uncertainty surrounding new licenses for retail stores in Ontario and the roll-out of additional stores in Quebec, all of which could have resulted in higher sales.

To raise capital, HEXO has chosen stock dilution and has also sold its Niagara, Ontario, facility, earning proceeds of CA$10.25 million. The strategy behind this move was to focus its capital on the development of more profitable business units. Hence, HEXO plans to use the funds from the sale in the expansion of the Belleville, Ontario, facility, and other general corporate expenses.

At the end of the third quarter, HEXO stated it had CA$95.3 million in cash, cash equivalents, and short-term investments -- with CA$50 million from additional financing.

There is still hope

HEXO's expansion in Israel's medical cannabis market and its CBD products' launch in the U.S. could help its revenue and profitability numbers soon. Medical marijuana demand is not declining any time soon in any country -- chances are, in fact, that more U.S. states and countries globally will work toward legalizing medical marijuana.

Though cannabis derivatives are in huge demand in U.S. states in which they're legal (evident from the rising sales), lack of federal legalization is still a challenge. But hopes are that 2022 could be the year when federal legalization will see daylight in the U.S. If that happens, both HEXO and the entire marijuana industry have a tremendous opportunity to grow. That might help HEXO meet its target of achieving profitability by the first half of fiscal 2021.

For me, HEXO is still a risky stock, but I haven't lost complete faith in the company. Looking at its growth strategies and confidence in rebuilding itself, I think HEXO is poised to grow in the long term.

Why Marijuana Stocks Like Sundial Growers Were Wilting Today
401%