Please ensure Javascript is enabled for purposes of website accessibility
Log In Help Join The Motley Fool
Free Article Join Over 1 Million Premium Members And Get More In-Depth Stock Guidance and Research
By Sushree Mohanty - Jul 8, 2020 at 8:30AM

Both cannabis markets are drawing attention. How are these two companies approaching these segments?

The potential of medical marijuana is widely known, not only in Canada and the U.S., but also globally. Many patients find that medical cannabis has helped them with certain health issues where conventional medicine has failed, including chronic pain, post-traumatic stress disorder (PTSD), Crohn's disease, and anxiety.

Meanwhile, recreational cannabis is gaining popularity because of the variety it offers in satisfying consumers looking for an intoxicating or relaxing experience.

To take advantage of this popular and evolving market, two big names in cannabis space, Aurora Cannabis (ACB -7.62%) and Canopy Growth (CGC -1.44%), are in a tight race. But before I tell you the progress each has made, let's shed light on the growth of the medical and recreational cannabis markets in Canada and the U.S. 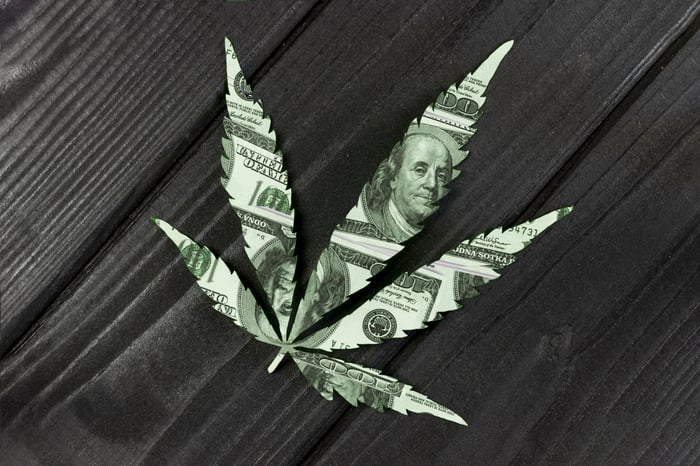 How have medical and recreational cannabis progressed?

Worldwide legal cannabis sales have been impressive. In 2017, the number stood at $9.5 billion; that increased to $12.2 billion in 2018, per data from BDS Analytics. In 2019, medical marijuana made up 71% of total legal pot sales.

Canada legalized medical cannabis in 2001, and since then the market has been thriving. A Marijuana Business Daily research report stated that the number of medical cannabis patients has exploded in Canada between 2004 and 2017. To be precise, the increase is from 7,914 patients in the second quarter of 2014 to 201,398 in Q2 2017. Cannabis oil, which was introduced in the first quarter of 2016, also led to higher sales.

The first wave of recreational cannabis legalization in Canada -- "Cannabis 1.0" -- happened in October 2018 and included flowers, oils, plants, and seeds. Total legal sales in 2018 were $1.6 billion, double the amount spent on just medical cannabis in 2017.

The second wave of legalization, "Cannabis 2.0" in October 2019, made edibles, vapes, beverages, concentrates, topicals, and more legal in the country.

In the U.S., medical marijuana is legal in 33 states and the District of Colombia, while recreational cannabis is legal in 11 states and D.C. The stronger markets -- California, Washington, and Michigan -- have been seeing good sales. Now, the newest legal market, Illinois, is catching attention with strong month-on-month sales since recreational cannabis became legal in January 2020.

Cannabis companies' progress in the market

The hype for recreational marijuana forced not just Aurora and Canopy but most cannabis producers to ramp up production. Unfortunately, external factors like regulatory hold-ups and slow rollout of legal stores pushed consumers toward the black market, affecting the revenue of the licensed producers. The plans for the Cannabis 2.0 launch were also going well until COVID-19 hit. Both Canopy and Aurora have failed to achieve positive EBITDA so far.

That said, things seem to be improving this year with the surge in cannabis sales amid the pandemic. Additionally, Ontario also plans to resume issuing new authorizations for cannabis stores this year. While Aurora hasn't updated its plans for derivatives, Canopy announced the launch of its upcoming cannabis-infused beverages and vapes.

Aurora seems to be recovering and is taking all measures to reduce costs and hit profitability by the first quarter of fiscal 2021.

The future of medical cannabis will depend on research. For now, the market seems to be strong and growing. More advanced research may reveal further health benefits of marijuana, thus boosting sales and helping cannabis companies' profits to soar.

Both Aurora and Canopy have made a name in the medical cannabis space now. But they also have Aphria (APHA) and Organigram (OGI -7.27%) in the race, which are in a much better position financially, posting higher revenues and profits while both Aurora and Canopy have yet to hit positive profitability. Shares of Aurora Cannabis, Canopy Growth, Aphria, and Organigram declined 12%, 2%, 3.3%, and 14.2%, respectively, in June, while the SPDR S&P 500 ETF was up by 0.92%. 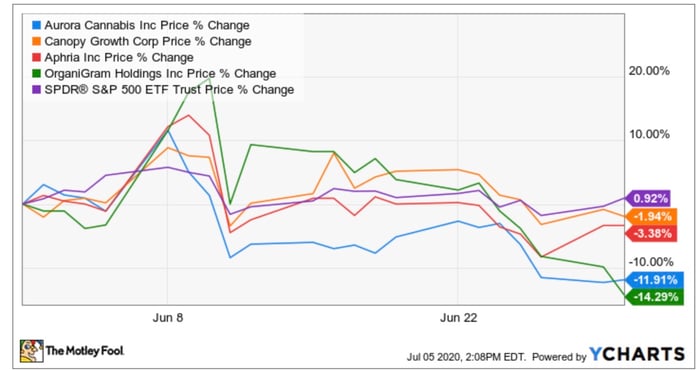 When it comes to recreational cannabis, as I stated above, cannabis 2.0 products could turn things around in Canada this year -- as long as the COVID-19 crisis doesn't put a pause on the launch of the upcoming products. With more states legalizing marijuana in the U.S., the long-term opportunities are massive, not only for Canopy and Aurora, but also for the entire cannabis industry. Grand View Research data shows the global legal cannabis market could be worth $73.6 billion by 2027.

That said, it is a volatile industry, so investors need to be cautious before making any investment decisions.