Uber Technologies (NYSE:UBER) isn't just a ridesharing company, and it's taking the next step to diversify its business with the introduction of grocery delivery.

But Uber's continued expansion beyond ridesharing provides good diversification to protect it from threats in any single business and leverage its technology and network of customers and drivers. 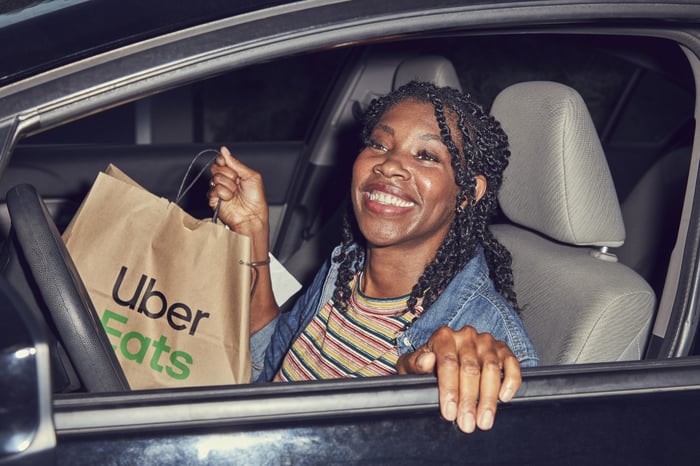 Lots of room for competition in online grocery

Grocery delivery has grown quickly in 2020, as more shoppers have moved to ordering groceries online during the coronavirus pandemic. Most experts believe the shift to online grocery ordering will be permanent, merely accelerating a trend that was already happening before the pandemic began.

Online grocery sales in the U.S. reached $7.2 billion in June. That's a six-fold increase from August last year. Total customers have nearly tripled during the same period. While that growth is fantastic, online grocery is still a small percentage of the overall industry. Americans spend over $700 billion per year on groceries.

As more people look into buying their groceries online, Uber may be able to acquire customers more easily than other grocery delivery services. For example, Instacart and Shipt rely on partnerships with grocers to promote their delivery service. It's less likely for grocery shoppers to seek those services out directly. On the other hand, Uber already has a massive user base for ridesharing and prepared food delivery, and it can easily inform users when grocery delivery is available in their city through the app.

That said, Walmart and Amazon are the two biggest winners in the recent influx of online grocery shoppers. And Uber's unlikely to win their business as both operate their own fleet of delivery drivers. Still, there's bound to be strong demand from other grocers for help competing against the retail giants.

Uber's previous move into food delivery has been a saving grace for its business amid the coronavirus pandemic. Rides were down 80% in April, but Eats orders were up 89%.

Expanding into grocery can help diversify the business further. Importantly, grocery delivery isn't necessarily perfectly correlated with restaurant delivery. For example, consumers may change preferences against restaurants and start cooking more at home. That makes it a good source of diversification for the business, further helping it weather forces outside of its control, whether they be natural disasters, consumer preferences, or new competition.

Additionally, adding grocery delivery to the business will give drivers more opportunities within Uber, making it more attractive as a platform overall. That could reduce driver acquisition expenses.

That said, grocery delivery is more involved than Rides or Eats. Uber is building grocery delivery on the back of its Cornershop acquisition and it'll likely integrate Postmates small grocery delivery operation into its business as well once it closes that deal. In both programs, drivers have to do the shopping at partner stores for customers, instead of just running into a restaurant and grabbing an order like with UberEats. Considering the strong growth in shopper signups for competitors like Instacart, there seems to be a lot of people looking to do that kind of work.

Grocery delivery may also prove a useful customer acquisition and loyalty tool. Uber's rolling free grocery deliveries into its Uber Pass and Eats Pass subscriptions, which could make customers more likely to sign up and remain loyal to Uber for its other services. Long-term subscriptions are a key aspect to Instacart, Shipt, Amazon, and Walmart's businesses, but Uber may be able to offer better benefits for some consumers.

Uber should see an improvement in its ability to attract, retain, and engage both users and drivers for its network with the introduction of grocery delivery. Continued scale and a more diversified business should support more stable revenue growth as it looks to forge a path to profitability.