Bloom is looking to quickly take advantage of a massive market opportunity for fuel cells in South Korea.

Shares of hydrogen fuel cell maker Bloom Energy Corp (BE 0.62%) are up 34% at 12:58 p.m. EDT on July 15, down a little from the intra-day high of 37%. Today's massive surge comes after Bloom announced an expanded partnership with a large South Korean engineering and construction company, SK Engineering & Construction, that would position it as a leader in that country's fast-growing hydrogen market.

It's a massive potential deal; the two companies anticipate being able to deploy 400 megawatts of fuel cells into the market per year as a result of this expansion. That's more than the company's entire sales over that past year. 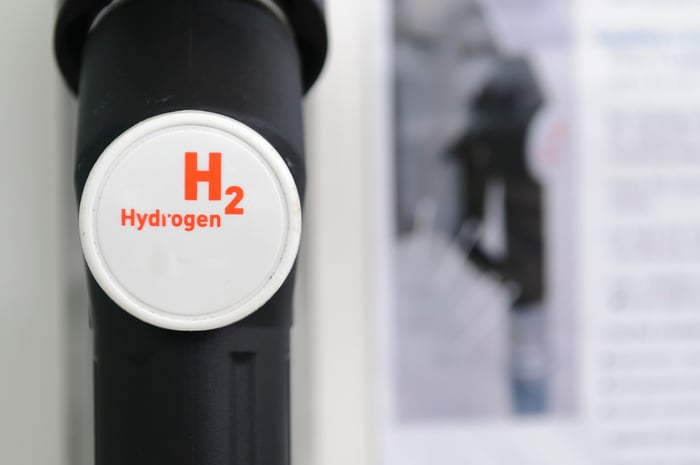 The South Korean government has made development of hydrogen for energy production a massive initiative, with a goal of deploying 15 gigawatts of fuel cell power capacity by 2040. Bloom is aiming to participate in this massive market, both with its fuel cells and also with its newly developed solid oxide electrolyzer, which the company says can produce zero-carbon renewable hydrogen it projects will cost the same as gasoline.

If this new focus delivers as anticipated, Bloom Energy is on track to significantly grow its business over the next several years. Today's announcement is actually the second potentially transformative partnership the company has made in the past month that's moved its stock price up more than 30% in a single day. On June 30, shares rocketed 32% higher following word that it had reached an agreement to develop fuel cells with Samsung Heavy Industries, one of the world's biggest shipbuilders.

These two partnerships, according to Bloom Energy, could be worth 700 megawatts of annual fuel cell deployments. That's a massive amount of growth from the 380 megawatts the company has deployed over the past year.

Needless to say, investors are getting pretty excited about Bloom's growing prospects. Shares are up 133% this year and up an incredible 101% over the past month alone. Fellow fuel-cell-focused peers Ballard Power Systems (BLDP -0.15%) and Plug Power (PLUG -2.06%) have both enjoyed the wave, with their stocks also rising higher over the same period: 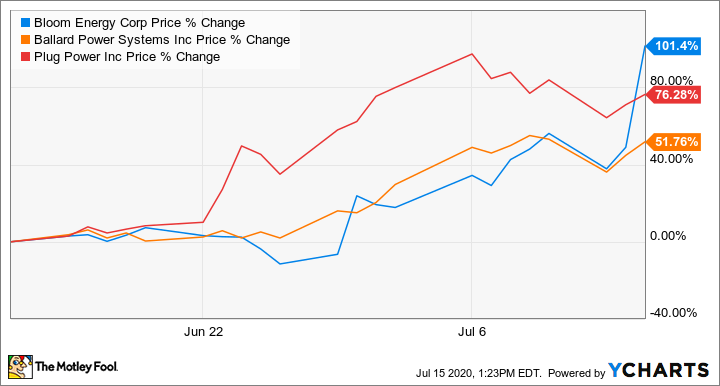 Plug Power has also made some recent deals, acquiring two private companies in the hydrogen business and raising its long-term forecast as a result.

Add it all up, and investors are starting to bet big on hydrogen finally going mainstream, and on these three finally delivering on their unmet promise as growth stocks.

Can the good times continue for investors? If so, it's going to take something these companies have not been able to ever do with any consistency in the past: make money. 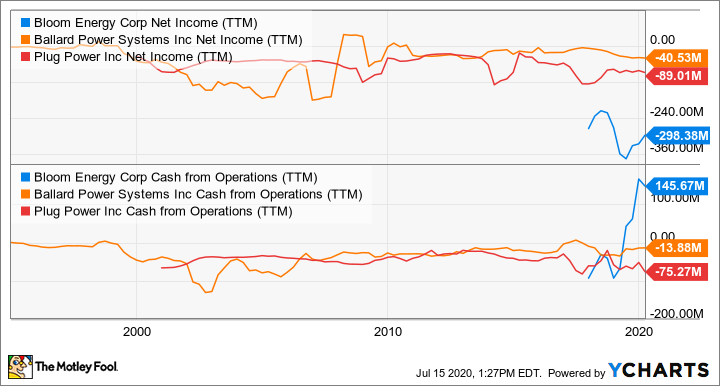 So far, Bloom is the only one to generate even positive operating cash in its history, and that's only been over the past year. None has ever delivered positive net income, ever. Moreover, the deals Bloom has recently announced won't add anything to the top or the bottom lines before sometime in 2021 at the soonest, and will likely add more expense in the interim.

While profits still aren't assured by these deals, Bloom Energy and its two fuel cell peers will almost assuredly remain very volatile and speculative investments until they can prove there's actually money to be made in fuel cells. So far, they haven't.