Colgate-Palmolive (NYSE:CL) has proved remarkably resilient during the pandemic as first-quarter sales rose 5.5% from last year and profits bounded 28% higher.

Because the personal care products giant generates around 70% of its revenue from international markets, and 45% of total sales came from emerging markets in the first quarter, its business has performed admirably despite widespread exposure to the impacts caused by the coronavirus.

But that was virtually all before COVID-19 was formally declared a pandemic in late March, so let's take a closer look to see if, after the ravages of the crisis that traveled around the world, Colgate stock is a buy. 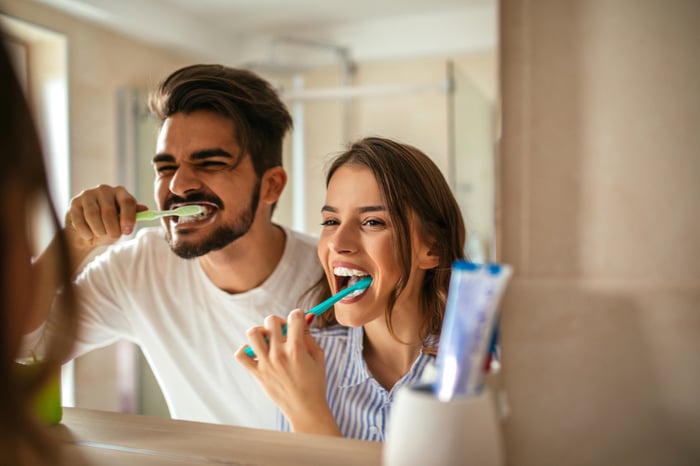 Names you can trust

A good part of Colgate-Palmolive's ability to withstand the storm has been the strength of its portfolio of brands, which often occupy the top one or two spots in any given category. For example, it owns 41% of the global toothpaste market and 31% of toothbrush sales, though they've slipped a few basis points of share from the year before. Oral care is Colgate's largest segment, accounting for 46% of annual revenue, or over twice the amount of any other segment.

It also has a significant share position in home care through laundry detergent brands such as Suavitel and its Hill's Pet Nutrition segment, which is sold in over 80 countries.

Although Colgate acquitted itself well in the first quarter, COVID-19's effects weren't really worldwide at the time, and regions such as Latin America, which accounted for 23% of revenue last year, are only now starting to really feel the effects.

Similarly, most of the impact on North America didn't happen until the second quarter. With coronavirus cases rising again in some areas of the United States, Colgate-Palmolive's North America segment -- which contributes 23% of the company's revenue -- isn't without risk either.

Fortunately, supermarkets and grocery stores where Colgate products are sold remained open throughout the crisis so the effects on sales may be minimal. Personal care products in particular are not usually thought of as discretionary items and may weather the tumult better than other products.

Although Colgate-Palmolive stock has lost a quarter of its value since the pandemic began, it's not necessarily cheap.

Although the toothpaste king's stock is trading at 25 times trailing earnings and 24 times next year's estimates -- not unduly overpriced, especially considering its global, market-leading positioning -- it does trade at over four times its sales and 48 times the free cash flow it produced after jumping 28% of those March lows.

Because the company is well over 100 years old and doesn't trade in the sexiest of market segments (who gets excited about toothpaste, toothbrushes, and detergent?), its markets are mature and it is not a fast grower, though it is a fairly stable one. Returns over the past three-, five-, and 10-year periods have largely lagged the S&P 500.

Yet many investors don't necessarily buy Colgate-Palmolive for the capital appreciation, but rather for its dividend.

It began paying a dividend in 1895, and has continued doing so uninterrupted ever since, a track record few companies can match. It also began raising the payout in 1963 and has done so every year for 57 consecutive years, making it a member of that rarified group of stocks known as Dividend Kings.

It also generates consistently high levels of free cash flow and sports a payout ratio of 52%, which means there is little risk the dividend will be suspended, let alone cut, even in a pandemic. The shareholder payout is currently yielding 2.4% annually.

Time to put a smile on your face

Consumer stalwarts like Colgate-Palmolive are often seen as a safe haven during times of turmoil. Their stocks may take a hit, but their proven track record over the decades -- or longer -- suggest they have staying power.

So in good times and bad, a stock like Colgate can provide ballast to one's portfolio, and a long-term steady performer like this is a stock investors can feel comfortable buying.

Is Colgate-Palmolive a Buy? @themotleyfool #stocks $CL Next Article
Current