The stock market finished mixed on Friday to complete a tumultuous week for investors. Earnings season has begun in earnest, but the readings that market participants got from companies that reported their latest results were far from clear about the future direction of the U.S. economy. The Dow Jones Industrial Average (^DJI 1.88%) eased lower on the day, but the S&P 500 (^GSPC 1.97%) and Nasdaq Composite delivered mild gains to end the week.

One area that investors have kept a close eye on lately is the electric vehicle (EV) market. Tesla (TSLA 1.72%) didn't make big moves on Friday as the industry leader, but other up-and-coming players in the space saw significant downdrafts. In particular, NIO (NIO 0.81%) was the big loser as many analysts begin to question whether the EV industry has come too far too quickly.

What happened to NIO?

NIO shares fell 14% on Friday, giving back some of the extensive gains that the stock has enjoyed lately. Stock analysts were to blame for the latest move lower for the Chinese EV maker.

Wall Street giant Goldman Sachs (GS 3.23%) cut its rating on NIO on Friday morning from neutral to sell. Goldman kept its price target for the stock unchanged, but at $7 per share, the figure contemplates even steeper declines from current levels. 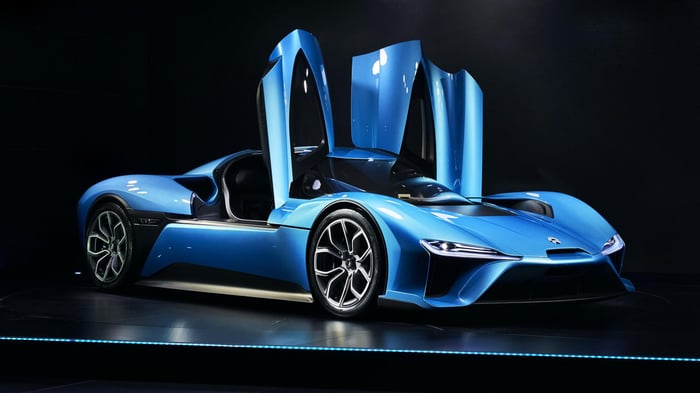 Goldman's view on NIO is centered on the huge price increase that the stock has seen. As recently as July 1, NIO stock traded below $8 per share, and Goldman could see at least some justification for having a balanced stance on the company's future prospects. But as shares topped out above $16, overvaluation worries set in for analysts.

Fundamentally, NIO could still end up on top. As a Chinese automaker, NIO will appeal to Chinese customers aspiring for a high-end consumer experience. There are plenty of potential buyers for NIO to woo. Yet the company also has challenges to overcome, and that could warrant some caution.

NIO saw the biggest drop among small EV players, but it wasn't the only decliner. Nikola (NKLA 1.03%) saw its shares fall 7% on Friday, while Workhorse Group (WKHS 6.99%) posted a 6% decline. Special purpose acquisition company Tortoise Acquisition (SHLL), which expects to merge with electric truck manufacturer Hyliion soon, was down almost 2.5%.

To some extent, all of these stocks got weighed down after highly optimistic assessments recently sent their stock prices through the roof. But there were also some company-specific news items. Nikola CEO Trevor Milton reported that the company will break ground on a production facility in Arizona on Thursday, July 23. Unfortunately, it disappointed would-be participants by making the event invitation-only, citing COVID-19 concerns. Some investors were also displeased when stock analysts at Deutsche Bank initiated coverage on Nikola with a hold rating.

Meanwhile, Workhorse is still working toward delivering its C-Series electric vans to customers. Deliveries began earlier this week, and it'll be interesting to see how many businesses take advantage of leases and short-term rentals to try out the Workhorse vehicles.

Hot industries like EV are often volatile. Investors should tread with caution, but there's plenty of potential for long-term gains in the EV arena.

Nio Hits the Brakes, but This Tech Stock Just Hit an All-Time Low